story and photos by Matthew Kadey

With the help of dazzling aerial views during Grand Tours, France, Italy and Spain seem to be top of mind for European cycling destinations. But after some wanderlust-ful research, southern Portugal – which promised no shortage of wild, surf-lashed beaches, narrow roads winding through wide-open spaces, Old World heritage and culinary delights – made a strong case for a place where my touring partner, Tabi Ferguson, and I could amass some spirited spring training, and perhaps a few sips of port along the way. 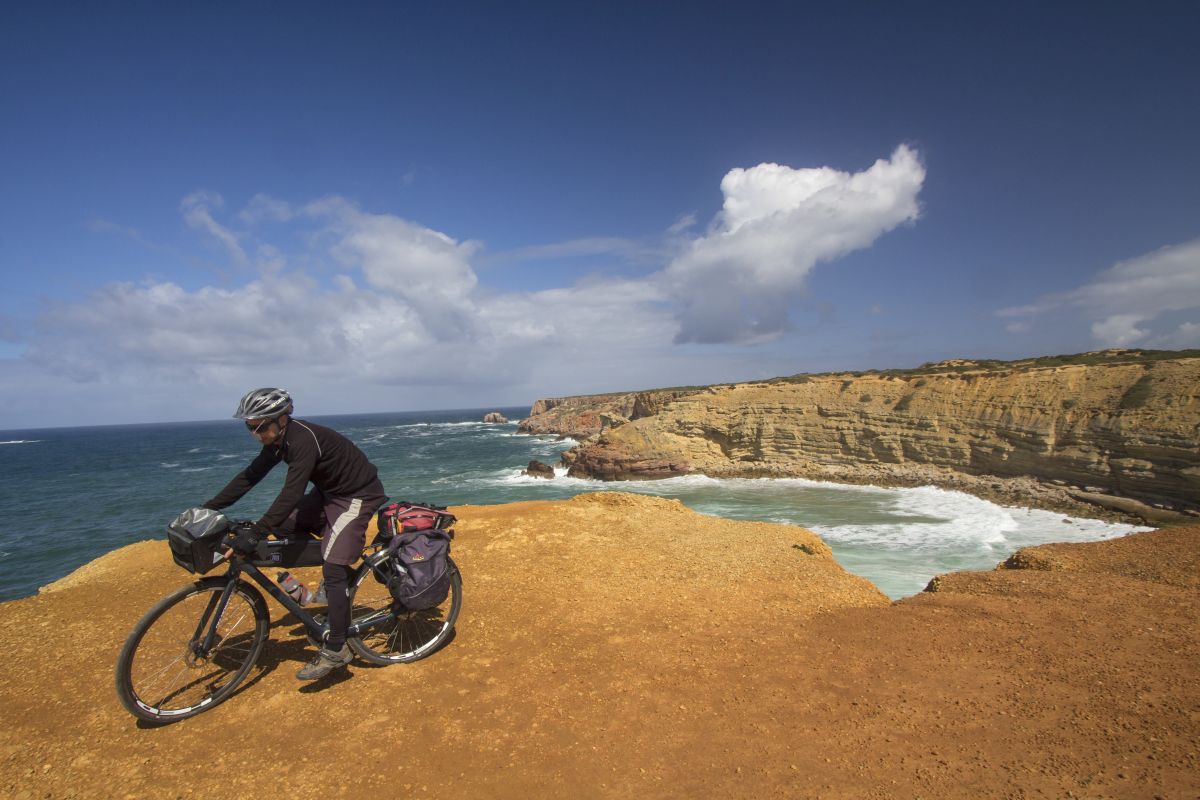 Portugal is home to nearly 1,800 km of coastline. It wasn’t long into our trip that the southwestern chunk of coastline provided a sensory overload. Visiting in the spring, before the summer tourist crush, we were blessed with mile after mile of quiet undulating roads. We took in vertiginous cliffs hovering over shimmering beaches. We rode through wildflower-saturated meadows and into seaside towns, including the beautiful Zambujeira do Mar that seemed to achieve a harmony between nature and humanity. Never were we very many pedal strokes from another stunning visual.

We found the south’s motherlode of scenery at Praia da Ilha do Pessegueiro, the beach at the former fishing village of Porto Covo. It’s a vast, dune-lined stretch of windswept sand that plays host to a 16th-century fort. Energized by the ocean breeze and fetching surroundings, Tabi and I explored the trails and unpaved roads in this location on our dirt-ready touring bikes. It’s here where a section of the Rota Vicentina – a 125-km coastal walking path – passes through. The route promises no shortage of views of cliff-backed coves fending off the angry Atlantic; it’s almost tempting to trade in the saddle for hiking poles – almost.

Farther south, past the pretty riverside town of Aljezur and Praia da Bordeira, a colossal swath of sand reached by riding through a green river-cut valley, the weather became warmer. A brilliant stretch of gravel grinding deposited us in Cabo de Sao Vicente – the most southwestern point of mainland Europe. Here, the sea pounds into weather-worn cliffs in a show that eats up camera memory space. Though the resident lighthouse sucks tourists in, you’re never a long ride away from a path leading down to your very own postcard-perfect view. Also, you’re never far from one of the most enticing rewards in Portugal – sumptuous pastry. 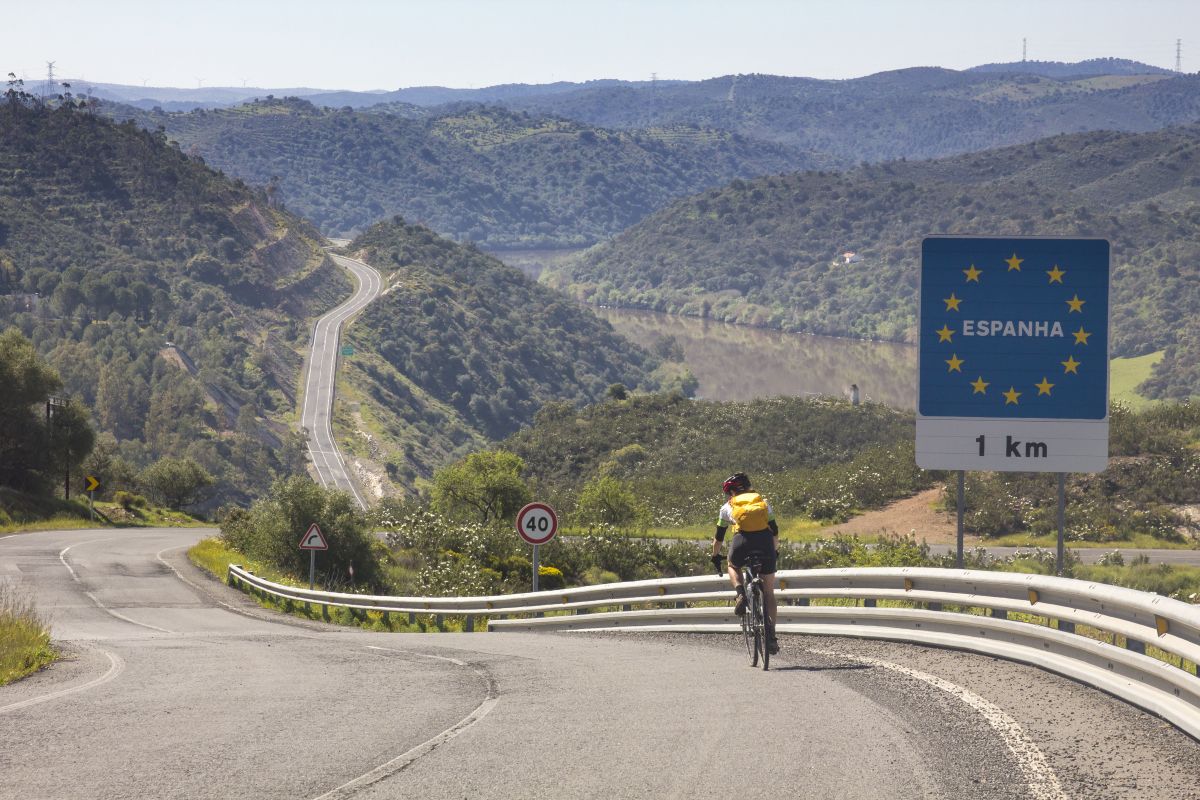 Historical records indicate that it was the monks and nuns of Portugal’s monasteries and convents in the 15th century who kick-started the long-standing passion for sweet pastries. During that era, the country ruled the global trade routes from Africa to East Asia, which resulted in great access to sugar and spices. Centuries later, southern Portugal still has a thriving pastry scene with everything from custardy pastel de nata to cheese-infused queijadas to chocolate salami (yes, that’s a thing) providing a healthy dose of calories to power our pedal strokes. No midday break from the saddle would be complete without a sweet treat. It was also common for us to picnic on inexpensive local cheeses, bread, olives and cured meats. Never far from a fish market with mackerel and other fresh swimmers plucked from the ocean, I often found myself wishing I could reel in a frying pan from my panniers.

Lined with a string of picturesque beaches to bury your toes in, the south facing coast of Portugal’s Algarve region is justifiably hit by a tourist tsunami during the summer season. But by heading inland away from the sunburnt bodies, we discovered numerous car-free roads that took us deep into a landscape of rolling hills dotted with stone-built villages, giant stork nests and grazing sheep. Beautiful hoopoe birds, with their trisyllabic oop-oop-oop call, provided our daily soundtrack. There was also no shortage of towns such as Silves, Loulé and Tavira that were oozing Old World charm. They beckoned for a day away from the saddle and a slower pace of exploration.

Unspoilt Mértola – set on a rocky spur overlooking the Guadiana River – is an Instagram-worthy site with its imposing castle of Muslim origin, medieval mosque and winding cobbled alleyways among a jumble of white-washed buildings. But our visit to this medieval village wasn’t all about snapping social media-ready photos of the open-air museum. Instead, we committed to striking out from Mértola and roaming the sparsely populated sunsplashed countryside. Day rides on empty stretches of pavement took us deep into the Parque Natural do Vale do Guadiana, where the endangered Iberian lynx wanders, and then into neighbouring Spain for lunch and the heart of the Alentejo region, an agrarian land of open horizons and an Islamic influence. 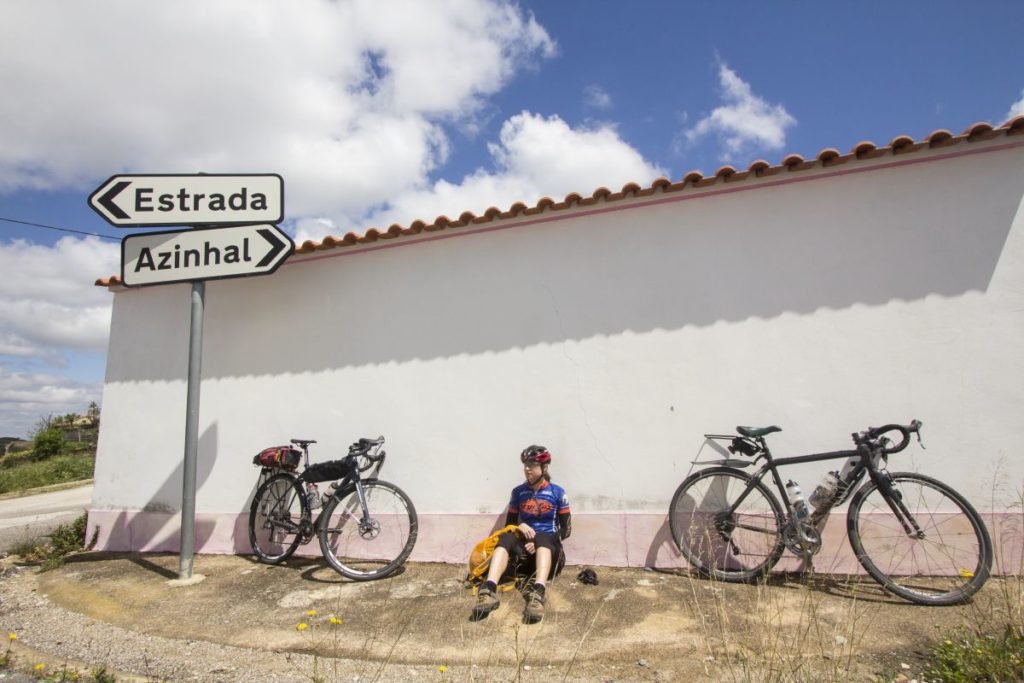 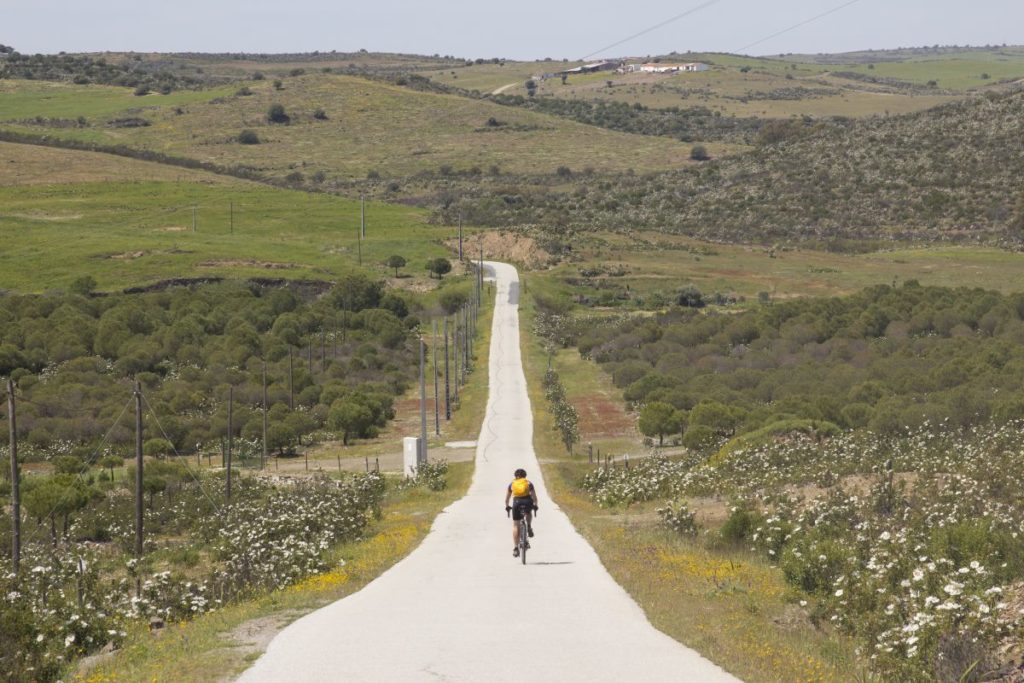 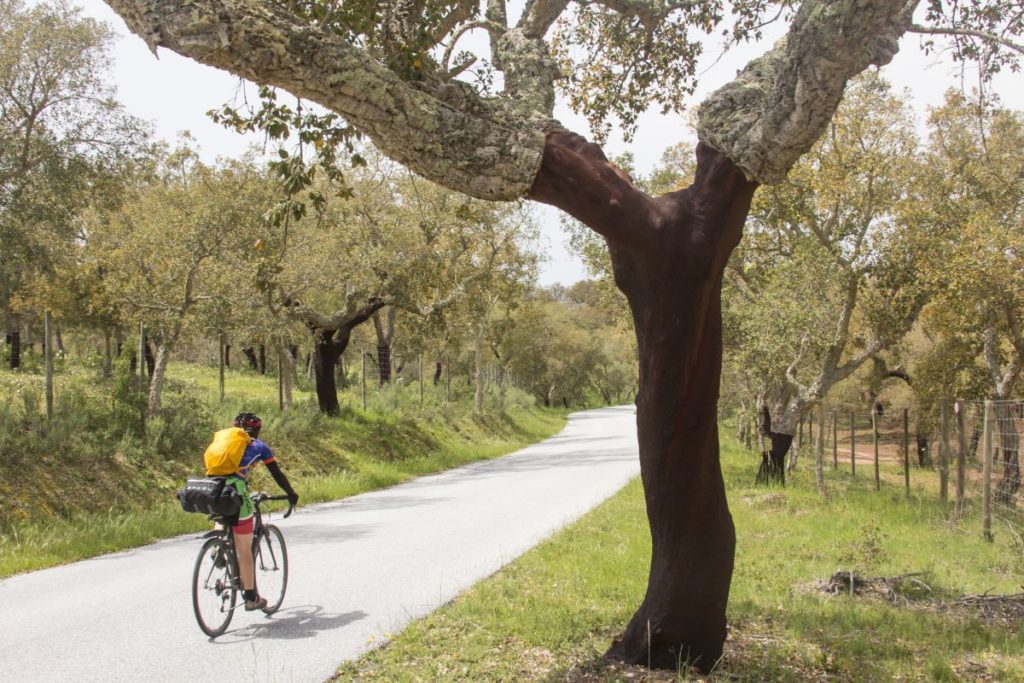 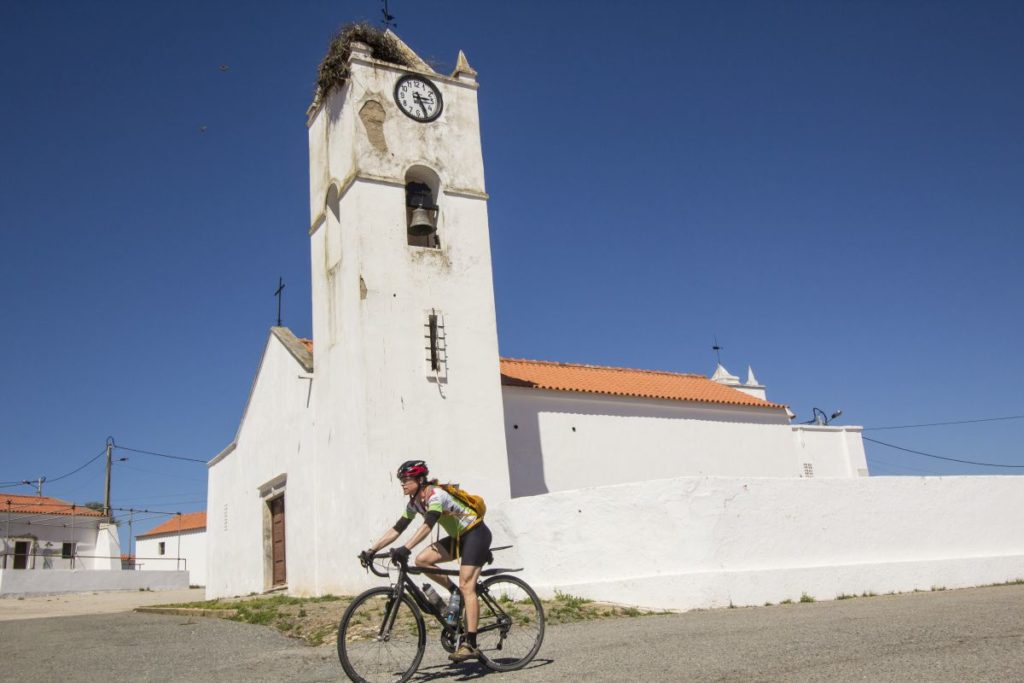 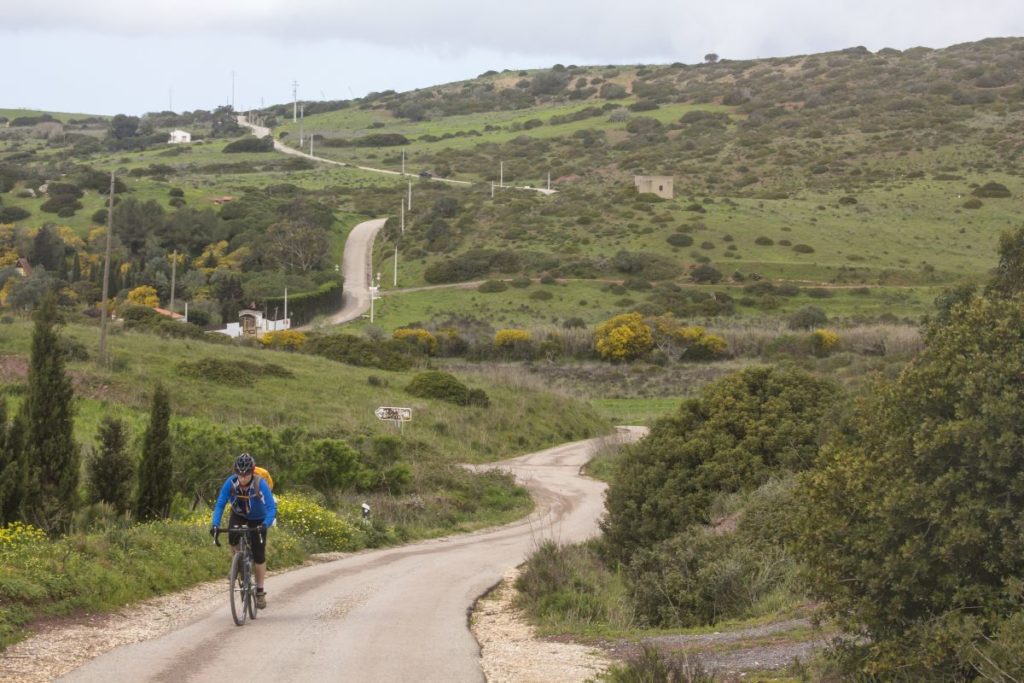 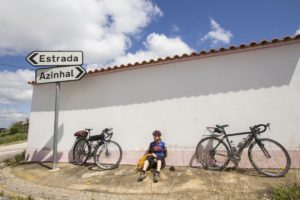 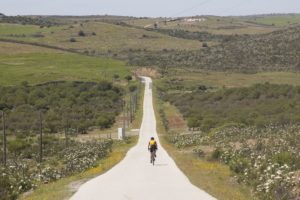 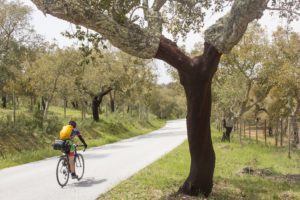 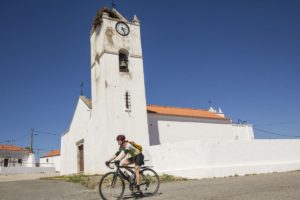 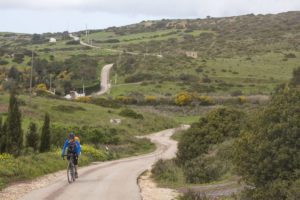 The lightly treaded Alentejo, which occupies one-fifth of Portugal’s landmass, is home to the largest cork forests in the world. Riding in the region took us past vast swaths of the manipulated trees. To harvest the cork used to cap bottles of excellent and inexpensive Portuguese wines, the outer bark is stripped from a cork oak tree once every nine years leaving behind a distinctive burnt-red trunk. The trip through rural Alentejo to the town of Evora also took us by olive groves, hilltop castles, mysterious ancient monoliths and almond blossoms. Evora, which has UNESCO World Heritage status, has Roman ruins, a sprawling cathedral and welcoming cafés in its 14th-century medieval walls. It’s a place for nature lovers, history buffs and romantics.

There are direct flights from Canada to Lisbon. From Lisbon, cyclists can use the help of the ferry system (bikes travel for free) to reach farther south.

In theory, southern Portugal, with its Mediterranean climate, can be a year-round cycling destination. The summer (June to August), however, can see heavy tourism and soaring temperatures. Some may find the winter months (December to February) a little too nippy and damp. Perhaps the best time to visit is in spring (April and May) when tourism is light, temperatures are generally comfortable and dazzling wildflowers abound. Fall (September and October) is another good option.

We brought gravel/cyclocross bikes from home outfitted with an assortment of bags to carry our luggage. This setup allowed us the comfort of enjoying all modes of travel – pavement, gravel and dirt. There are also a few companies that run supported tours in the Algarve and Alentejo regions of Portugal.

Riders can choose to rest their legs everywhere from campgrounds to family-run hotels to more luxurious resort-style places. We chose to travel light without camping gear and used booking.com to secure roofed accommodation along route.

With one of the EU’s weakest economies, southern Portugal is among the most affordable destinations in Western Europe. Small local hotels rarely cost more than 50 euros and a calorie-laden pastry can be had for less than a single euro.

We relied heavily on ridewithgps.com to plot our rides, which were then uploaded to our Garmin devices. With the routes on our head units, we found our way through the bounty of small country roads effortlessly.