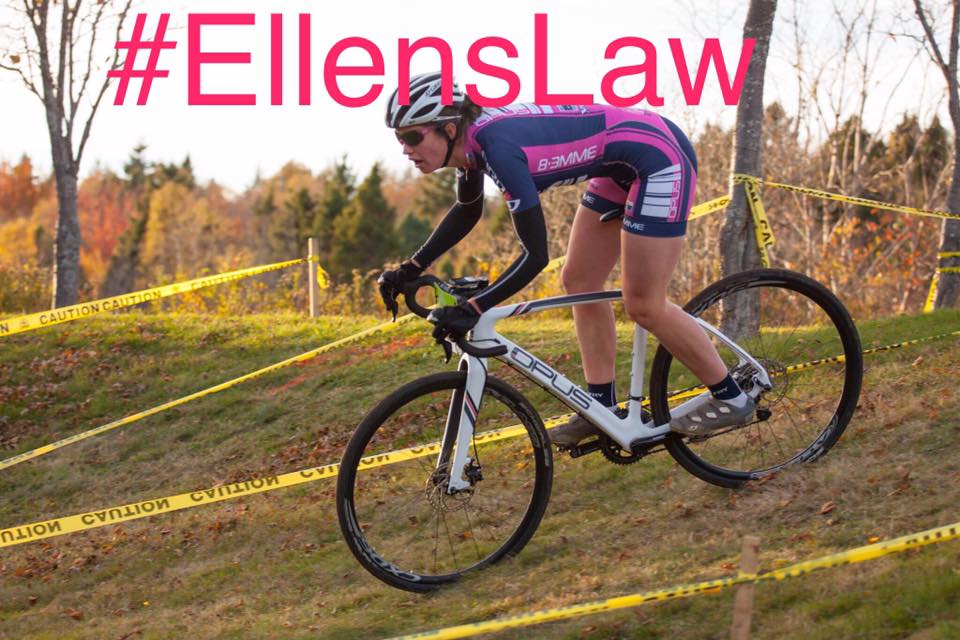 Following the death of Ellen Watters on Dec. 28, 2017, members of the cycling community around her hometown of Apohaqui, N.B. decided to organize a fundraiser in order to erect a memorial in front of the Potashcorp Civic Centre in Sussex in her honour. The Ellen Watters Memorial Fundraiser will be held on Feb. 18 at Bike and Beans in Quispamsis a suburb of Saint John, N.B. beginning at 10 am UTC with an auction beginning at 3 pm.

Watters impact on her community and the people she inspired through her work at the Potashcorp Civic Centre made it a logical place to put a memorial to celebrate her life. Marci Webb, Heather Purcell, Randy Hall and Jeffrey Munroe began putting the gears in motion to organize a fundraiser to erect the memorial which will also include an urban bike repair stand soon after news of her passing reached them.

“We wanted to erect a touchstone, a permanent dedication to her life,” Munroe who had met Watters at local cyclocross races said. The local community, friends and family have also been advocating strongly for a one-metre passing law for vehicles overtaking cyclists which has been called Ellen’s Law. The formal proposal of the legislation was delayed because of a nor’eastern storm that moved into the Atlantic provinces on Friday.

In order to fund the memorial and come together to celebrate Watters whose presence was infectious and touched many in the community, an event was planned. Throughout the day, there will be a cookie medal sale, a 50/50 draw, and a Korean Fire Noodle Challenge.

An auction will also be held with a growing list of items donated from the local community and the Canadian cycling community at large. Local artists and business owners have made donations, Olympian Catharine Pendrel has donated two signed vests, the first Canadian to wear the yellow jersey at the Tour de France Alex Stieda has personally donated an item and Louis Garneau is donating a bike. Cannondale has also donated a Synapse disc and Canadian Cycling Magazine has donated a one-year subscription. From 10 am to 3 pm UTC a silent auction will take place on the event’s Facebook page. After 3 pm the bidding will go live at the event.

“I’ve been personally touched by people who I speak to about it. A lot of non-cyclists have been very responsive with their donations and support,” Munroe explained. “There is nobody in the community that hasn’t been affected by what happened to Ellen. Ellen’s Law will do the most amount of good but we hope this small celebration will have people remembering the positivity that emanated off of her.”

People who want to donate directly to the memorial can make donations via e-transfer to alex@potashcorpciviccentre.com. If you’d like to make a donation to the auction contact Marci Webb, general manager of Bike and Beans, at bikes.beans@yahoo.ca

Those who want to follow the fundraiser online or participate in the bidding are asked to keep an eye on the Ellen Watters Memorial Fundraiser Facebook page. The organizers plan to Facebook live the Korean Fire Noodle Challenge and some of the bidding.