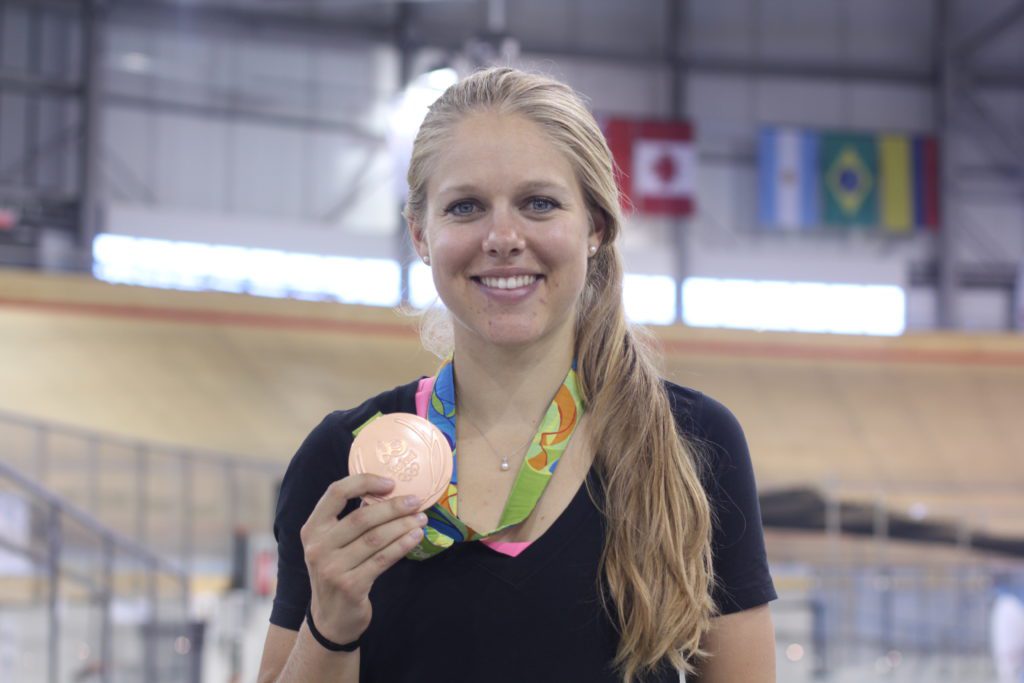 Kirsti Lay stands casually swinging her Olympic bronze medal in the Milton Velodrome as she talks and takes pictures with fans and friends. Lay was one of two Olympic medalists in the velodrome on Saturday afternoon on the first day of the Canadian track championships along with Lauran Brown. The pair were members of the women’s team pursuit squad which earned a bronze medal in Rio.

“I had a nice month off where I just visited family and friends that I haven’t been able to see in a long time,” said Lay after racing in the team pursuit at nationals with a composite team. “It was very special to bring home a medal, visit schools and travel around.”

With a few months before her next competitions, Lay has had the chance to let the Olympic experience sink in. “I think it’s always the pinacle goal you shoot for,” Lay said on winning an Olympic medal. “To be honest it didn’t really hit me until I got home and you are out of that Olympic bubble. 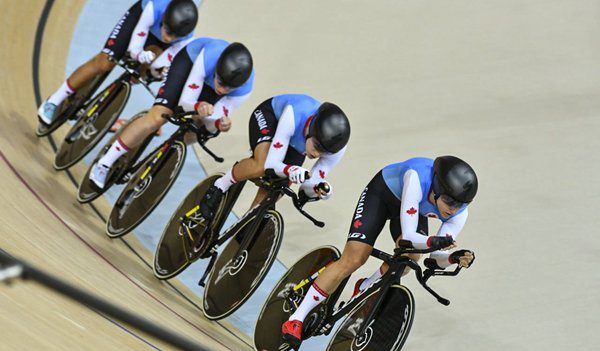 “To find a new goal now is interesting and is full of it’s challenges. It was definitely was very exiting and for me personally it was more about the process of getting that medal,” Lay said about how the experience has impacted her life.

After nationals, Lay will travel back to Montreal, the city the Medecine Hat native now calls home, to take some time off and relax before once again refocusing ahead of next season. “I haven’t been riding my bike a whole lot but I’ll get back into it soon,” said Lay. “The day after our race we did a 10-km run in Rio just for fun. We were so excited to get sore in another way than from pedaling which we were so focused on.”

Lay almost signed up for the Montreal half-marathon which took place on Sunday, September 25 but because the conflict with nationals was unable to. “I look forward to being at home, running and doing other sports with friends. Just do random things I’m usually to focused on cycling to do and enjoy every day life” said Lay about her plans for the off-season. “Cycling has been all consuming for the last four years. I like to cook a lot and bake. When you are on the road, you don’t get the chance to do that as much.”

With the Olympics having been a big goal for the past four years, Lay will spend next season racing a bit more on the road with the American based Rally Cycling team she has been a member of for a couple of years now. “I would like to focus more on road this coming year, switch things up and enjoy that. I would still like to do some track races,” Lay added. “Maybe some World Cups and potentially the world championships if I am selected.”

The offseason also gives Lay a chance to pursue other interests. “I am taking a French class now that I am back home,” Lay said adding that the qualities of an elite athlete translate to helping her in other parts of her life. “The determination and resilience from sport drives you to be a better person in the other things that you choose to pursue. I think I am always pretty goal driven. Hopefully that helps me learn French quickly,” Lay added with a laugh.