Perseverance, determination and a whole lot of power are what Ottawa-native Matteo Dal-Cin (Rally Cycling) used on Sunday to win his career first elite national road race title in front of friends and family. Dal-Cin is a prolific Strava user logging all his rides on the training social app and to our delight that meant we could see the data from his title-winning ride. Dal-Cin averaged approximately 330 watts according to Strava for 3 hours and 43 minutes to win the maple leaf jersey after 160 km of racing, much of it in the rain. 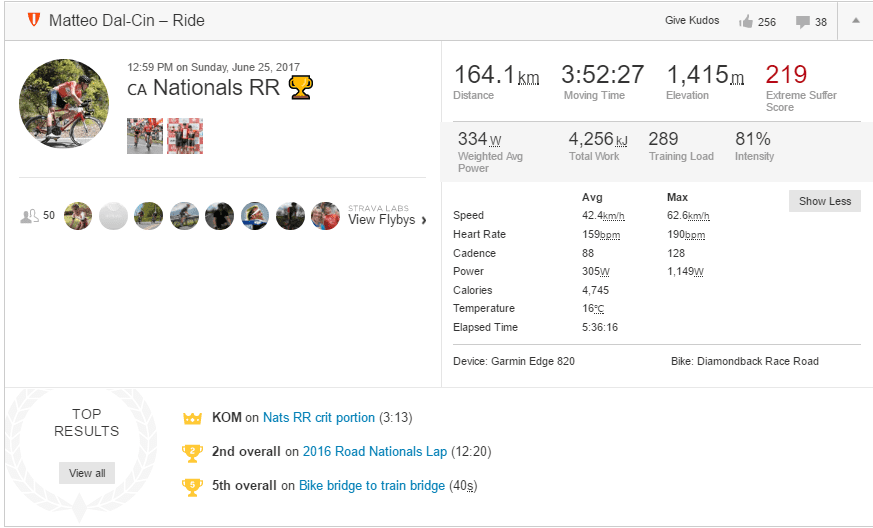 Dal-Cin was one of the 160 km races most active riders chasing down or instigating moves throughout. While other top contenders faded, Dal-Cin was relentlessly on the attack knowing that if the group contested the race in a bunch sprint he wouldn’t have a shot at victory. Two storms wrecked havoc on the race and just before the first storm hit Dal-Cin had escaped with Nick Zukowsky (Silber Pro Cycling). When they were brought back, the organizers neutralised the race for 10 minutes while thunder cracked and lightning lit up the sky.

During the first 50 km of racing, Dal-Cin not only produced his highest peak power of 1,149 watts but he also, for just over an hour, raced with an average heart rate of 174 bpm and speed of 46.5 km. During the first hours of the race, riders accelerated to try and break away but were chased down and reabsorbed by the peloton. This forced riders to constantly surge to stay in contact with peloton that every lap would thin because riders simply could not keep pace.

While the speed slowed down after the storm when the race resumed with 110 km to go, the continued accumulation of fatigue took its toll as riders were required to constantly accelerate out of corners and along the courses straightaways to maintain contact with the surging group which continued to see riders attack off the front.

With 30 km to go, Dal-Cin was once again active with former Silber teammate Ryan Roth after a break of seven was reeled in large part thanks to the work of Svein Tuft (Orica-Scott) who dropped the hammer in the pouring rain. The pair attacked but were brought back. Only 22 riders at this point remained in the peloton. Tuft once again came to the front and produced some punishing accelerations as rain once again began to pelt down on the riders.

In the final 30 km of the race, Dal-Cin averaged 358 w. While the speed over the final 30 was more fluctuating because of the surges at 43 km. Despite the harder pace, Dal-Cin’s heart rate was more stable maxing out at 178 bpm and averaging 166 bpm. His top heart rate of the day according to Strava was 190 bpm at the 22 km mark.

In the final 15 km, when Marc-Antoine Soucy and Dal-Cin escaped the grasp of the reduced peloton, he produced steady but no spectacular efforts. The fatigue had settled in and the pair were doing their best to work smoothly together to hold off the pack that included Tuft, Guillaume Boivin and Pier-André Coté of Silber.

The pair safely navigated the final corner and then in the final metres of the race, Dal-Cin unleashed his sprint, 1,139 w to come around Soucy for the win. According to Rally Cycling’s website, Dal-Cin weighs 77 kg or 170 lbs.

Dal-Cin was not the only national champion to post his ride on Strava. Oliver Naesen (AG2R-La Mondial) won the Belgium title with a powerful sprint of 1268 w. Dutch national champion Ramon Sinkeldam (Team Sunweb) won from a sprint that peaked at only 1,129 w which was enough to hold of Wouter Wippert and defending champion Dylan Groenewegen.