Canadian Cycling Magazine and VeloPress are giving away one copy of Greg LeMond: Yellow Jersey Racer by Guy Andrews. The gorgeous coffee table book with photos and stories ($59) is a must for any fan of road cycling interested not only in the three-time winner of the Tour de France, but also the story of how North Americans made their way into the Continental sport of cycling.

The book is a portrait of LeMond and his career. There are gorgeously printed photos from his era of racing, mostly 1977–1994. Author Guy Andrews has also collected stories from athletes who rode with, or against, LeMond during those years. We hear from Sean Kelly, who jokes that he and LeMond would happily swap one of the American’s world championship wins with one of the Irishman’s Monument victories so each can round out his palmares. There are also stories by Ron Kiefel who tells how LeMond could eat McDonalds, party, train and still recover better than the rest. The tales from others – Stephen Roche, Robert Millar, Chris Boardman and more – not only tell us about LeMond, but also road racing at the time that U.S. riders made serious inroads into what was previously a cloistered European sport. 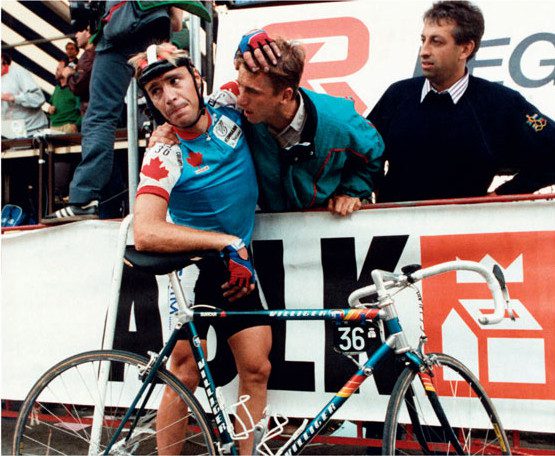 Caption the image of Greg LeMond and Canadian Steve Bauer and fill out the form below for a chance to win. The winner will be selected on November 25.