On Mar. 20, the Ontario Provincial Police (OPP) official Twitter account posted a video of a cyclist in Caledon, On. riding past a stop sign without stopping.  The video shows the police vehicle turning on its sirens and chasing down the cyclist. As the cyclist moves into the road to avoid the vehicles parked in the bike lane, the 32 second clip ends with the car and bike pulling over to the side of the road.

Walker road, the suburban Caledon East street where the cyclists was ticketed, was completely empty of other road users when the OPP officer issued the ticket. Many comments on the original video argued that the cyclist was not acting dangerously.

Many stop signs are put in to slow down speeding vehicles in residential areas. Drivers are dangerous, not a cyclist barely doing 30 on an empty street.

According to Ontario’s Highway Traffic Act (HTA), bicycles are considered to be a vehicle which requires its operator to stop and identify themselves if charged with committing a driving infraction. The are are a number of fines cyclists can be charged with, many of which are increased in specified community safe zones. 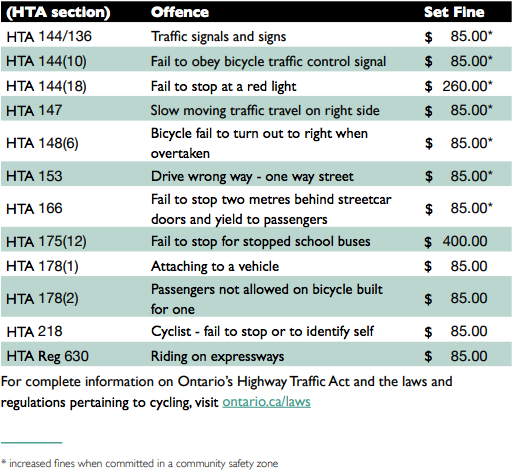 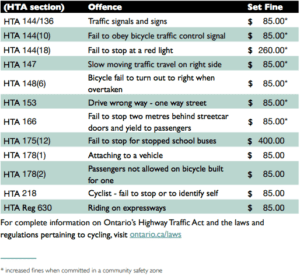 In this instance, many argued that the police car was endangering more lives by speeding through the stop sign in a 40km/h zone than the cyclist who actually committed the infraction.

I would love to see the speedometer of the SUV cruiser. Like that we could discuss the threat a 2 tons SUV going through a stop sign without stoping & going probably twice the speed limit in a residential area with possible pedestrians crossing could represent to the public pic.twitter.com/gjlassnhIF

On the other hand, others commended the police for doing the work to stop irresponsible cyclists who hold automobile drivers at their mercy.

Were working on it. #wehearyourconcerns ^im

Forget cyclists, there are plenty of SUVs pick ups and sedans applying the Ohio Stop… even when your trying to cross the street with a stroller. Maybe we can focus on vehicular traffic first? Once they learn to stop then move on to cyclists

This is so stupid. There is a big difference between a human powered bicycle and an engine powered vehicle. Make those stops signs into yield sign for bikes please.

In response to the backlash, the OPP says that it posts “numerous videos about motorists not stopping,” and that, “all road users must take responsibility for their driving behaviour.” For some, the response was not enough.

What’s next? J-walkers who might put a dent in a vehicle? 🤦‍♂️