When Norco launched it’s new-look Revolver FS platform earlier this year, I was eager to try the redesigned xc bike out.

Two versions of the cross country race machine launched at the same time. For the World Cup and XCO race crowd, there is the Revolver FS 100. New for 2020 is the Revolver FS 120. With slightly longer travel, the bike has a braoder appeal than 90 minutes between the tape. It’s still very much a go-fast machine, but with a wider range of places where it is happy going fast. Stage races, XC Marathons, occasional racers and, of course, anyone who like to go fast on their local trails even if no one is watching.

I had the chance to take the longer-legged Norco Revolver FS 120 1 out on my local Victoria, B.C. trails. Not just on Bear Mountain’s Canada Cup course, where the FS 100 had already shown its speed, but on longer rides on a wider range of technical B.C. singletrack. As expected, the bike likes to go fast. A cross country bike that climbs is not out of the ordinary, though. What is less expected has been how fast, and confidently, the bike descends back down. 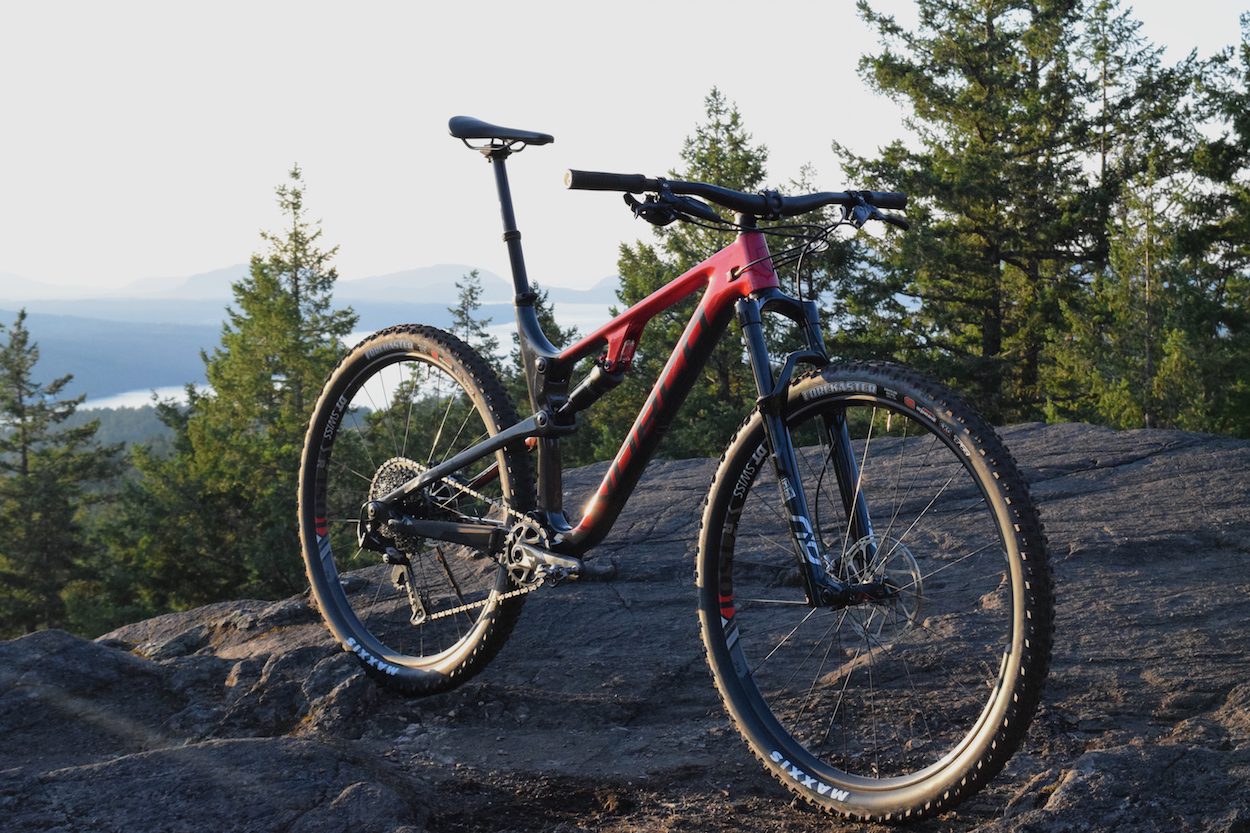 As of its launch, the 2020 Revolver FS 100 had already racked up some serious international results on the World Cup and North American XC calendar. Norco Factory Team riders quietly started riding the bike as far back as summer 2018, and immediately started posting found success.

When the curtain was lifted on the team’s new race bike, what might have looked like minor changes were revealed to be a full re-design of Norco’s cross country platform. The new Norco Revolver FS 120 and 100 might appear similar to previous model years but, with updated geometry bringing a major overhaul to the bike, it rides completely differently.

Norco has a specific set of changes it wanted to accomplish with the new geometry, including moving riders’ centre of gravity forward, and lower into the frame. The change is intended to create a more powerful position climbing and through technical sections. The Revolver FS 120 gets a upright 74.9-degree seat tube angle and a slack 67.4-degree head tube angle. It also stretches out, with reach growing to 478 mm (size Large) and wheelbase up to 1188 mm (Large), helping make the more forward riding position more stable. 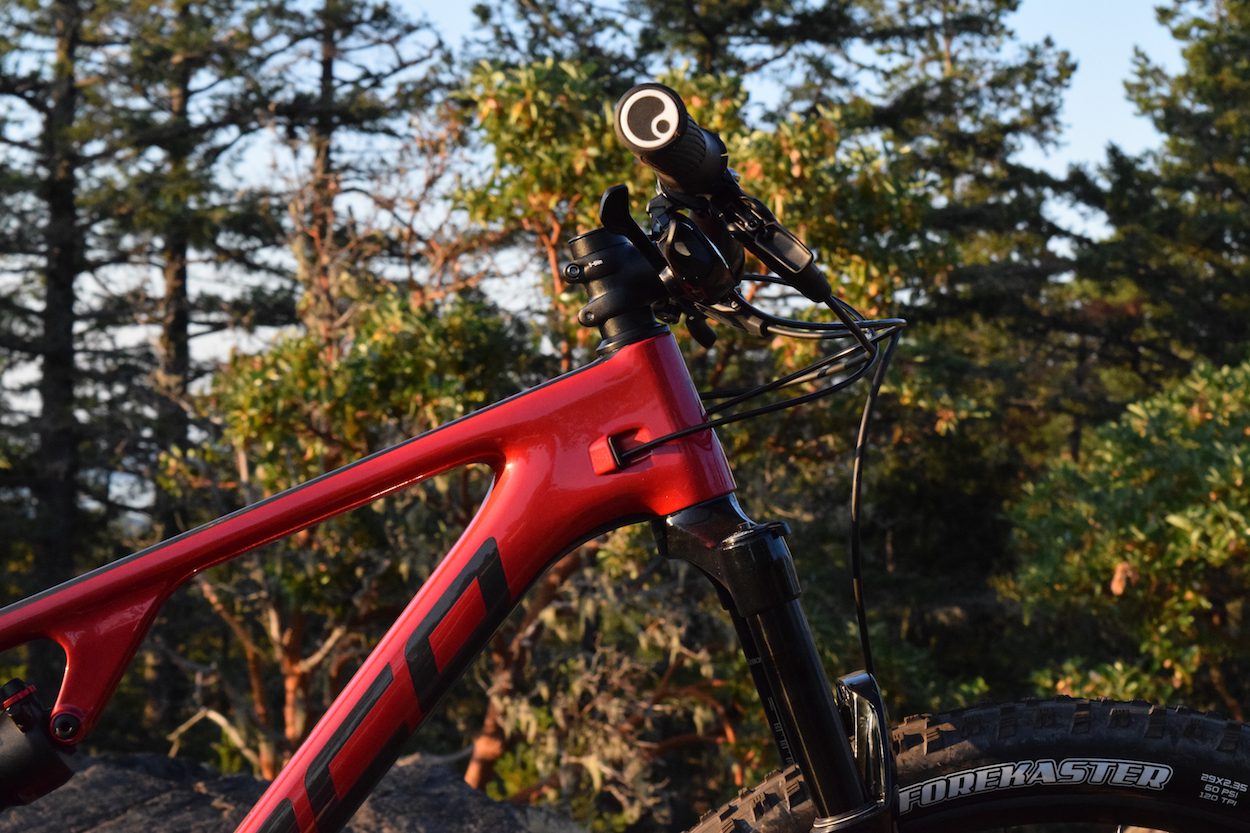 This forward climbing position means you have to move around less on the bike, saving energy that you can put back into the pedals. Since descents are part of cross country racing, and an increasingly important part, the slack HTA and short stem aim to make the Revolver more confident, and faster, when the trail points back down.

To make sure all riders sit in this forward geometry riding position, Norco carries forward its size-specific rear centre lengths from previous generations of Revolver FS. Chainstays lengthen in proportion to the different front centre measurements, so that riders on different size frames stay balanced in the middle of the bike. 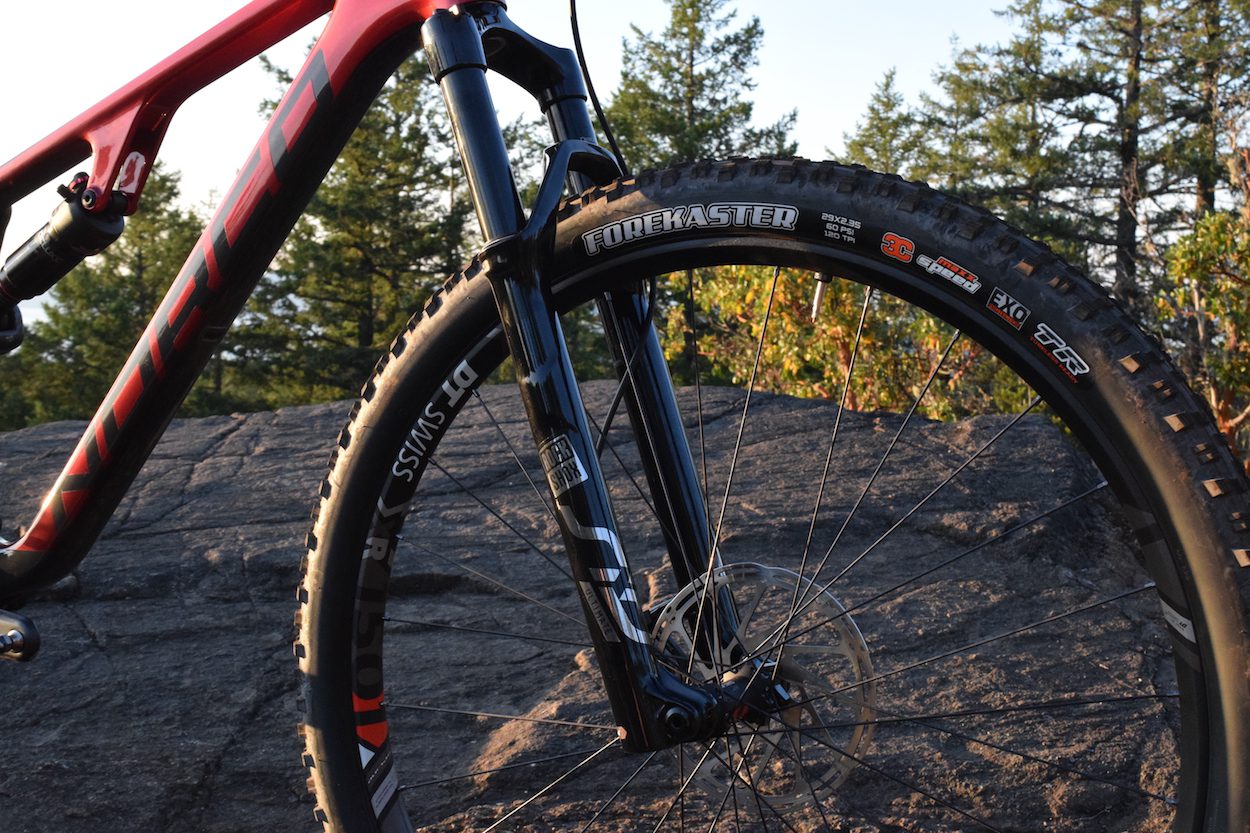 Norco offers three tiers of the Revolver FS 120. I’m currently testing the middle option, the FS 120 1. This version of the bike gets a RockShox SID Ultimate 120 mm fork, and RockShox Deluxe Select+ RL shock. The 100 and 120 use the same frame and same shock length, but with a different shock stroke to get the extra travel. 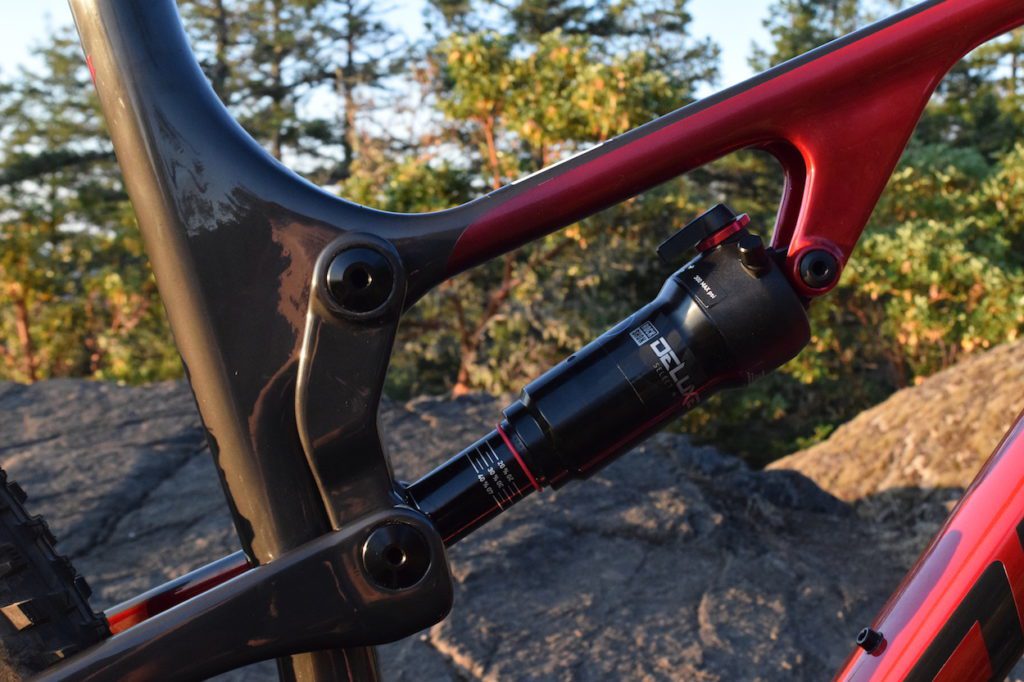 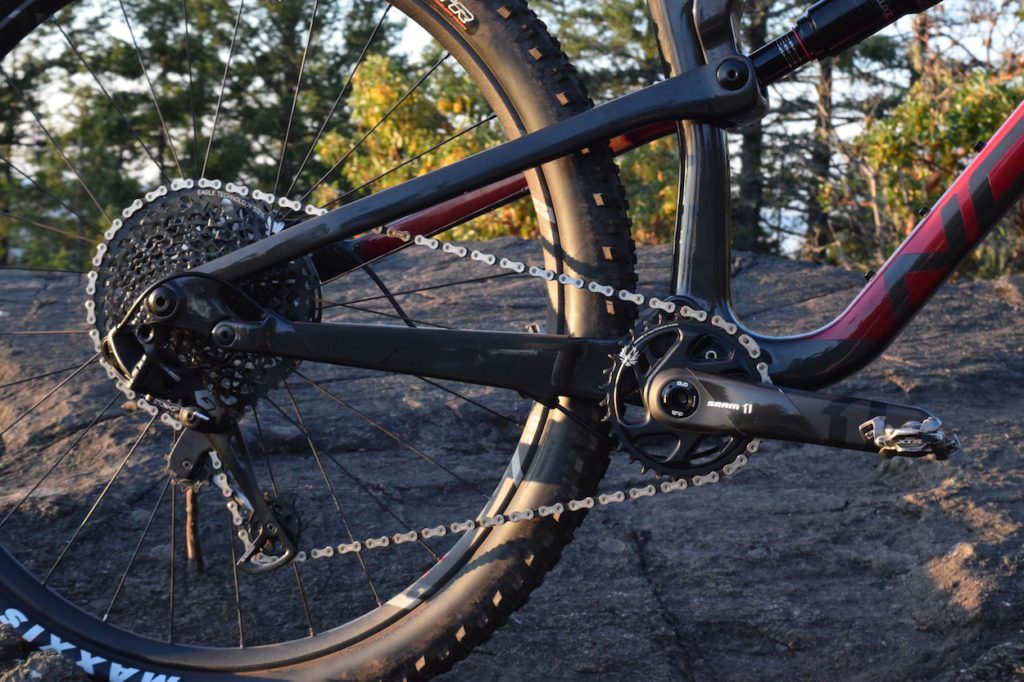 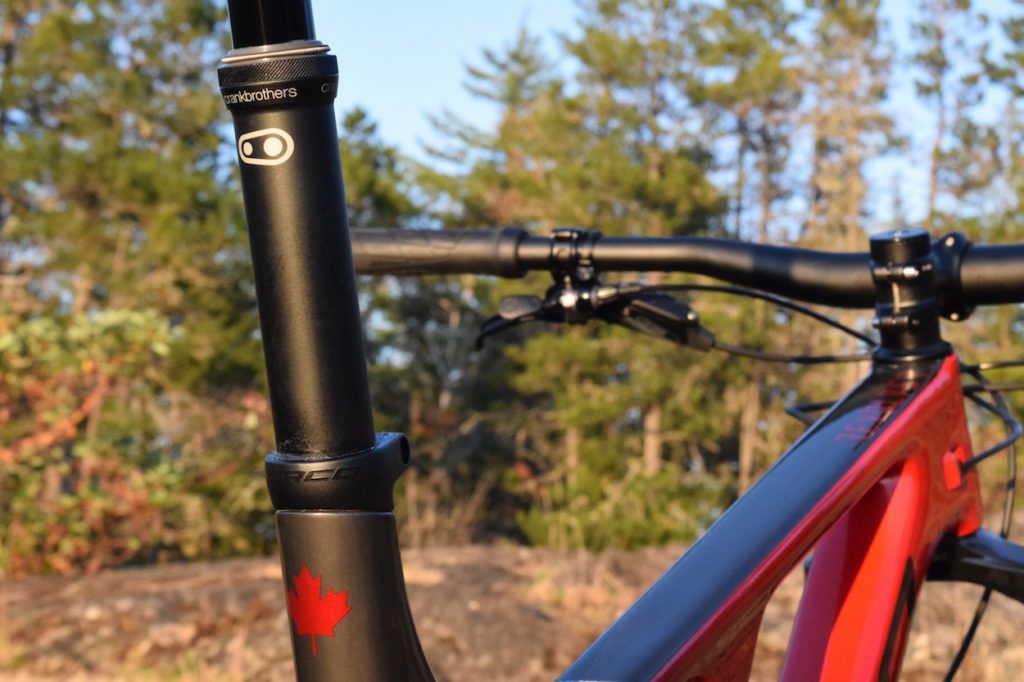 A 170 mm Crank Bro's Highline dropper post gets the seat well out of your way to take advantage of the Revolver 120's capabilities. While Norco clearly marks its Canadian heritage 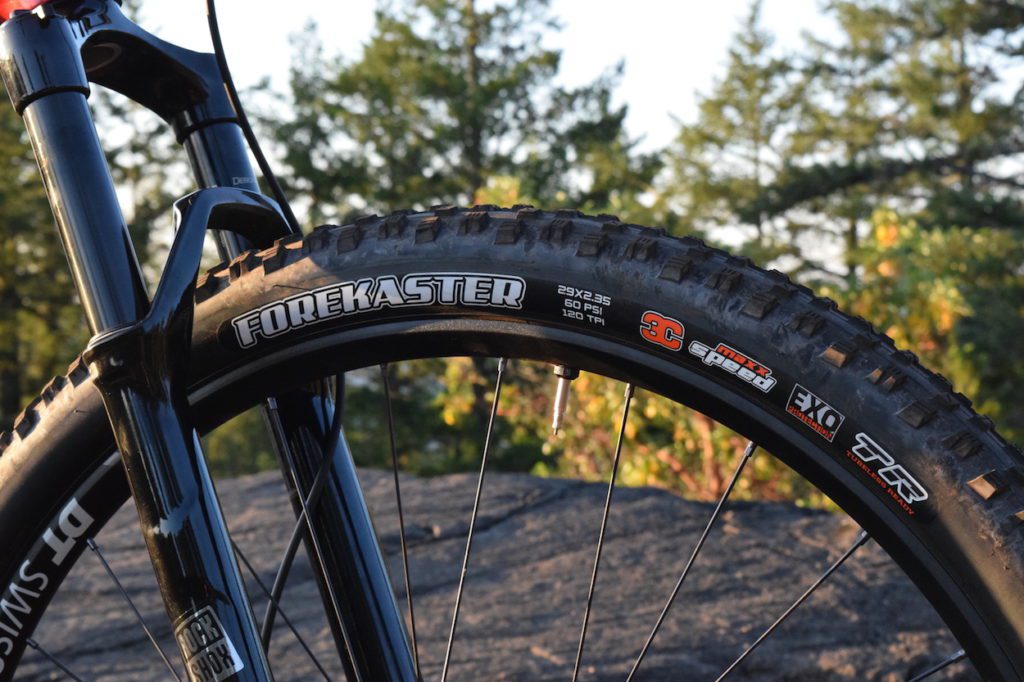 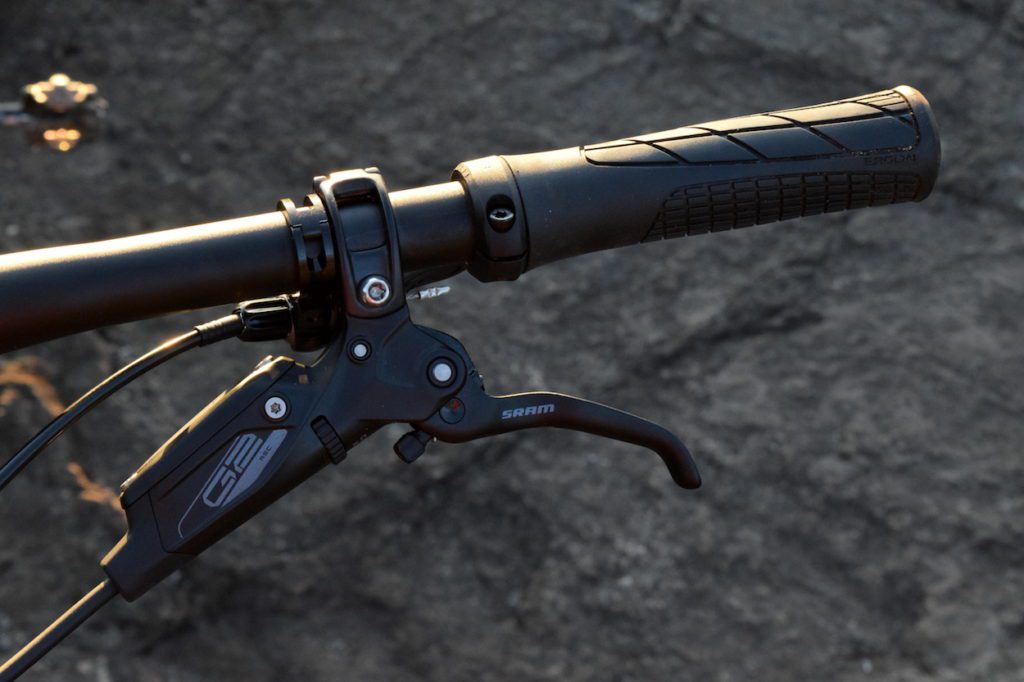 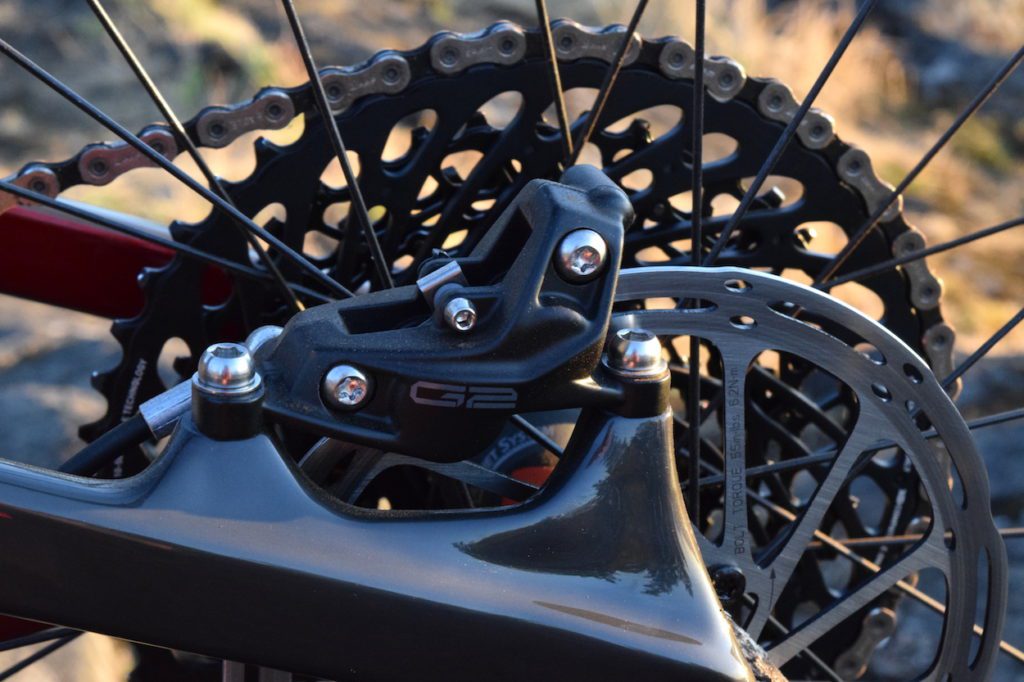 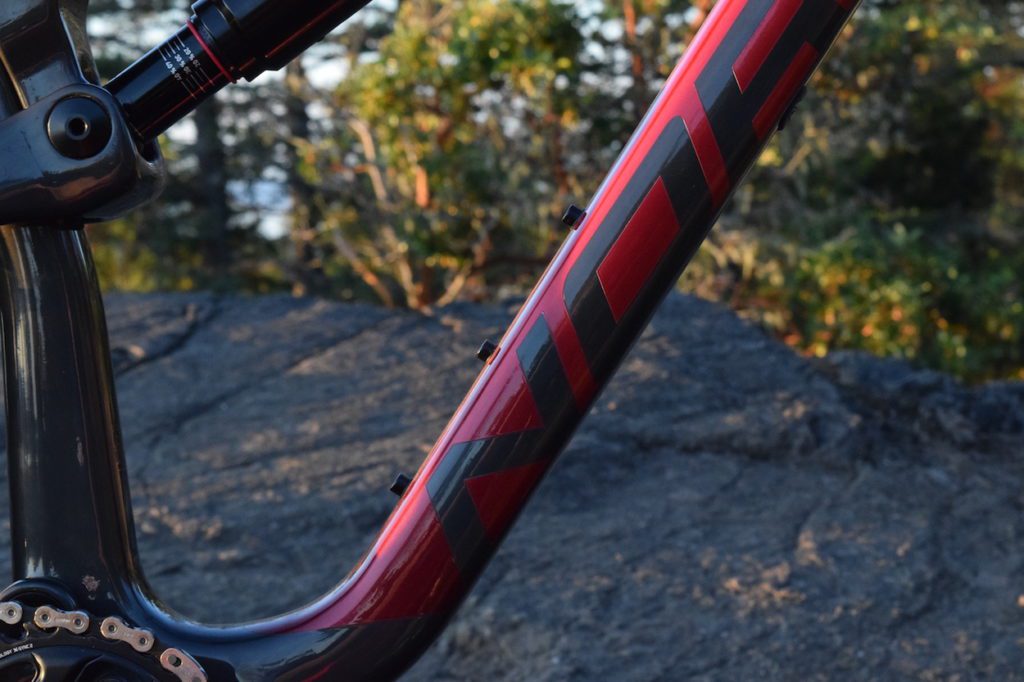 Water bottle mounts, and a sleek red to black fade 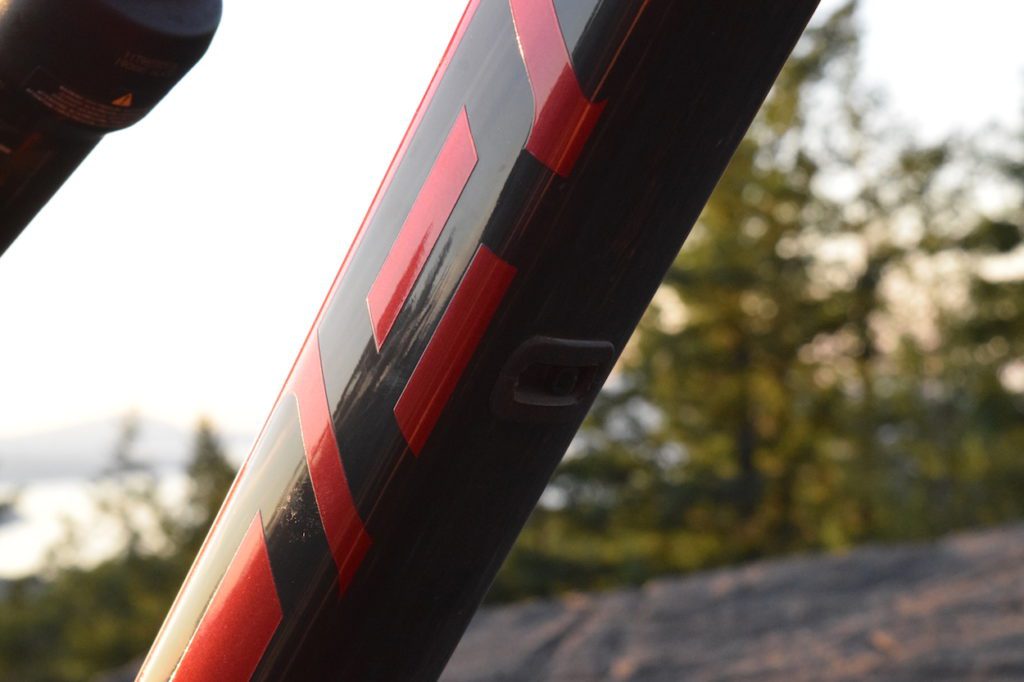 Keep the internal cables in check 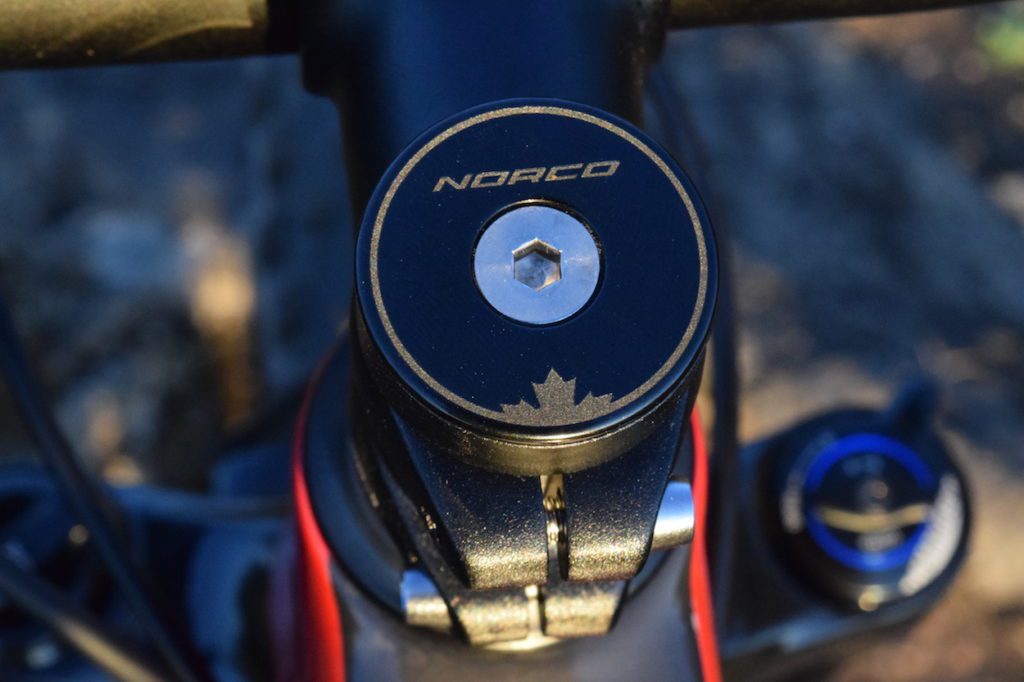 One more maple leaf, right where you can see it every ride. 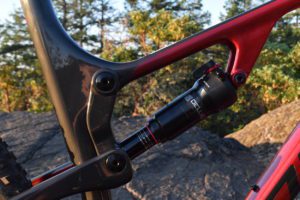 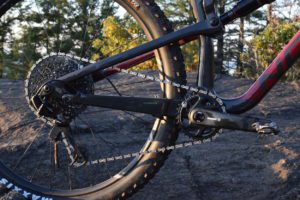 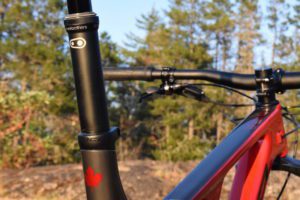 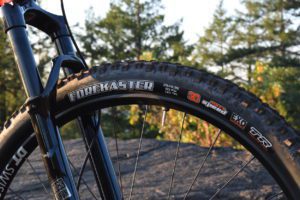 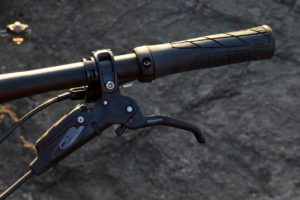 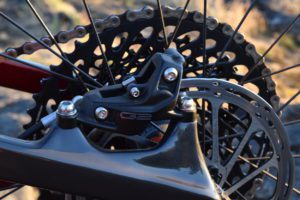 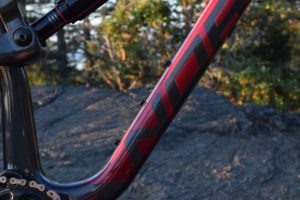 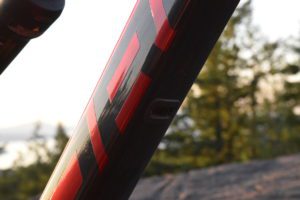 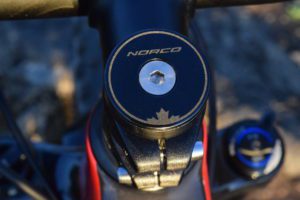 In line with Norco’s claim that they want you to feel comfortable getting rad on the Revolver FS 120, a 170 mm Crank Bro’s Highline dropper post gets a Fizik Taiga saddle well out of the way on the descents.

Norco has a suggested retail price of $6,700 for the Revolver FS 120 1. It sits between the FS 120 2, which moves to SRAM NX Eagle and a RockShox SID Select for $5,000, and the no-holds-barred Revolver FS 120 ASX. At $11,000, the top-shelf race rocket gets full SRAM AXS Eagle wireless drivetrain and dropper post, carbon fibre DT Swiss XRC 1200 wheels and a host of other upgrades.

Rolling from geo number on paper and out into woods on the Revolver FS 120, it is immediately clear that Norco’s updated geometries make a solid difference in how the bike feels. Admittedly, it took part of a ride to adjust to the new handling. But, once I relaxed and trusted the bike to do what Norco said it would, the Revolver quickly impressed.

Norco’s reasoning behind its forward geometry isn’t just that it’s a more fun ride down. The Revolver is supposed to be more capable on the ups as well. How it gets that speed, though, is a bit different than you’d expect from a traditional XC race bike. Whether it’s the slacker HTA, or slightly heavier build, the bike doesn’t feel as twitchy and jumpy as some other race bikes. Comparing times on trails, though, it definitely is going fast.

Once I started to trust the bike and stayed in an aggressive position through rough sections of trail, it started to feel like I was more centered in the frame and that I needed to move around less to maintain momentum. The forward riding position makes the Revolver FS 120 feel calmer through roots, rocks and bigger features. The bike strength, and the key to speed, lies in maintaining momentum with less effort. The Revolver FS 120 climbs well enough with the shock in the open position, especially on trails, that I only reached down for the lock out lever or extended, smooth climbs. 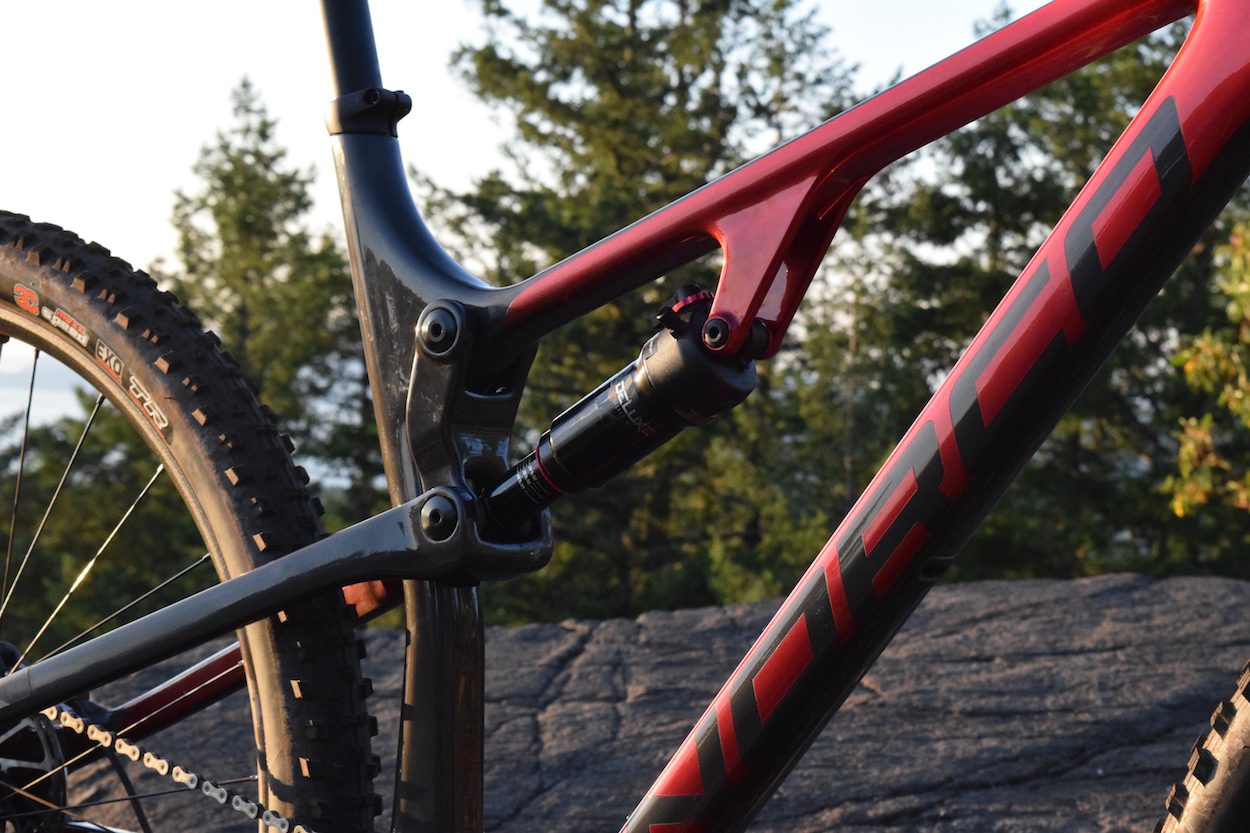 Pointing the Revolver FS 120 back down, the benefits of Norco’s changes to the race bike were less subtle. I was immediately confident pushing to go faster, carry speed and even jump higher on high speed trails. Where traditional XC bikes can manage going down, the Revolver FS 120 embraces and attacks the descents. The Revolver isn’t just capable on descents, it is fast and it is fun. For anyone looking to tackle big stage races like the BC Bike Race, this will save energy and let you gain time on the descents. If you just want to go fast on your local trails, the Revolver’s descending chops make it exciting to ride descend on, whether that’s wide open speed or challenging technical trails.

Part of this is the solid shock linkage and back end. Norco hasn’t shaved any weight off the Revolver’s frame over previous years. Instead, it’s moved material to where its needed. The result is a back end that feels solid and stable pushing into berms and holds its line through roots and rocks.

On first impression, Norco seems to have found a winning formula in the Revolver FS 120, and one that will just as good on long days that don’t involve a start/finish line. I’ll be putting more miles into the race whip that wants more over the coming weeks to see if it can pull double duty as an cross country, or XC marathon bike, and a all-day trail bike, or if it will fall short at one or the other.