The crowds aren’t just bigger than a World Cup or Canada Cup. They know you’re name and, as many Canadians experienced over five days of racing at Mont-Sainte-Anne will cheer loudly for anyone in red, white and blue. Fiercely loyal crowds can be a big boost to an athlete, but can also add an element of pressure to repay that support.

We asked Canadian’s about their experience racing at home in Mont-Sainte-Anne. Here’s what they had to say:

“That feeling of crossing the line into first, and I could feel the crowd – it’s definitely a moment I’ll never forget,” Iles said after having led an especially memorable edition of the Mont-Sainte-Anne downhill.  “I wish I could have sat there a little bit longer and got a medal, but top-10 is a pretty strong result for my second worlds, especially having the pressure of being in Canada”

“That was an amazing experience. I had a good run, and a lot of fun on my bike this weekend, just really enjoying it. having world champs at home does not happen very often, and I tried to make the most of it.”

“There were some spots on the course where I couldn’t even hear – my ears were ringing. It was so intense,” Batty said after the race, clearly appreciative of the course side support. “I just want to say a true ‘Thank you’ to everyone that came out, we’re just so proud that this big of a turn out came out and showed up for world championships.”

“It was like nothing I’ve ever experienced. I was suffering like crazy up those climbs but there all my family and friends just screaming at me – it was an unreal atmosphere.”

“To have people chanting “Haley Haley” on the side of the course and screaming Go Canada – I’m going to get emotional here – that was a very special experience and no matter what place I finished I’m going to remember today for a long time.”

“It was amazing,” Auclair said of racing world championships in his home province. “Everywhere I was on course, it was just a tunnel of cheers.” 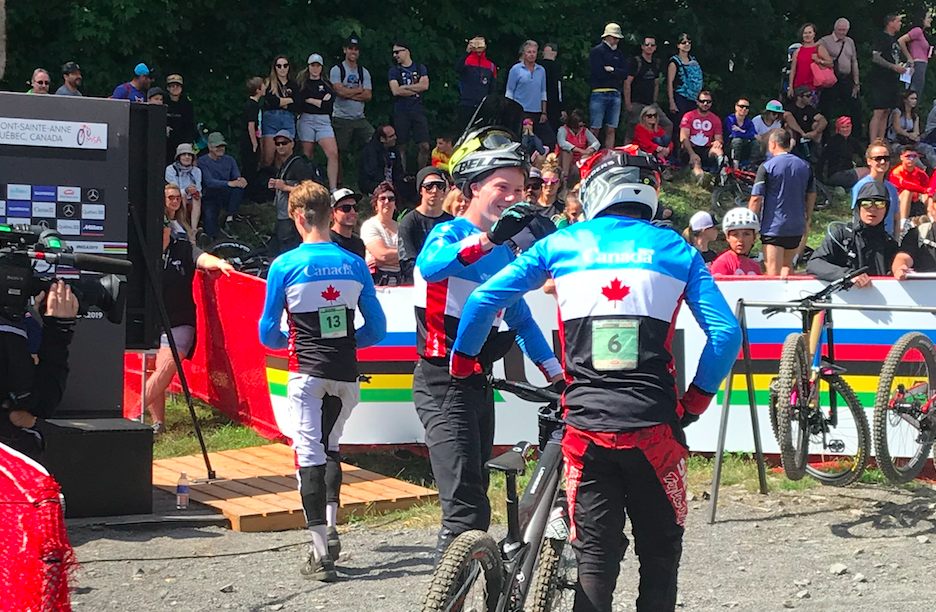 “The crowd is awesome, it’s so cool! I can really feel my fan, my countrypeople, really pumped for me. And really feeling like they wish they were her racing – alot of my friends are really good racers, so it’s kinda cool to do this for all of them,” Verbeeck said after finishing eighth, and clearing the final two big jumps with a flat rear tire. “Eighth with a flat tire is not too bad, I’m happy.”

“It’s been such a sick experience, all of us Canadians have just been riding together all week,” Jamieson starts, with Cruz interjecting “Getting haircuts together,” (there were reports the juniors all cut each others hair to get race ready) “Just hanging out, it’s been so good,” Jamieson finishes.

“I’m pretty happy about that, it’s sweet to perform well in front of a home crowd,” Bouchard said of his result. Like all the Canadians on course, the tall Alma, Que. rider was cheered loudly around the course. “It was crazy to hear my name everywhere – calm places on course were rare. That was just crazy out there. I’m so happy to have a great world championships at home.”

“All my family came here to cheer for me, I’m very happy about that,” Arseneault said after achieving her season long goal at Mont-Sainte-Anne. “I’m super grateful for everyone who came, so thank you.” 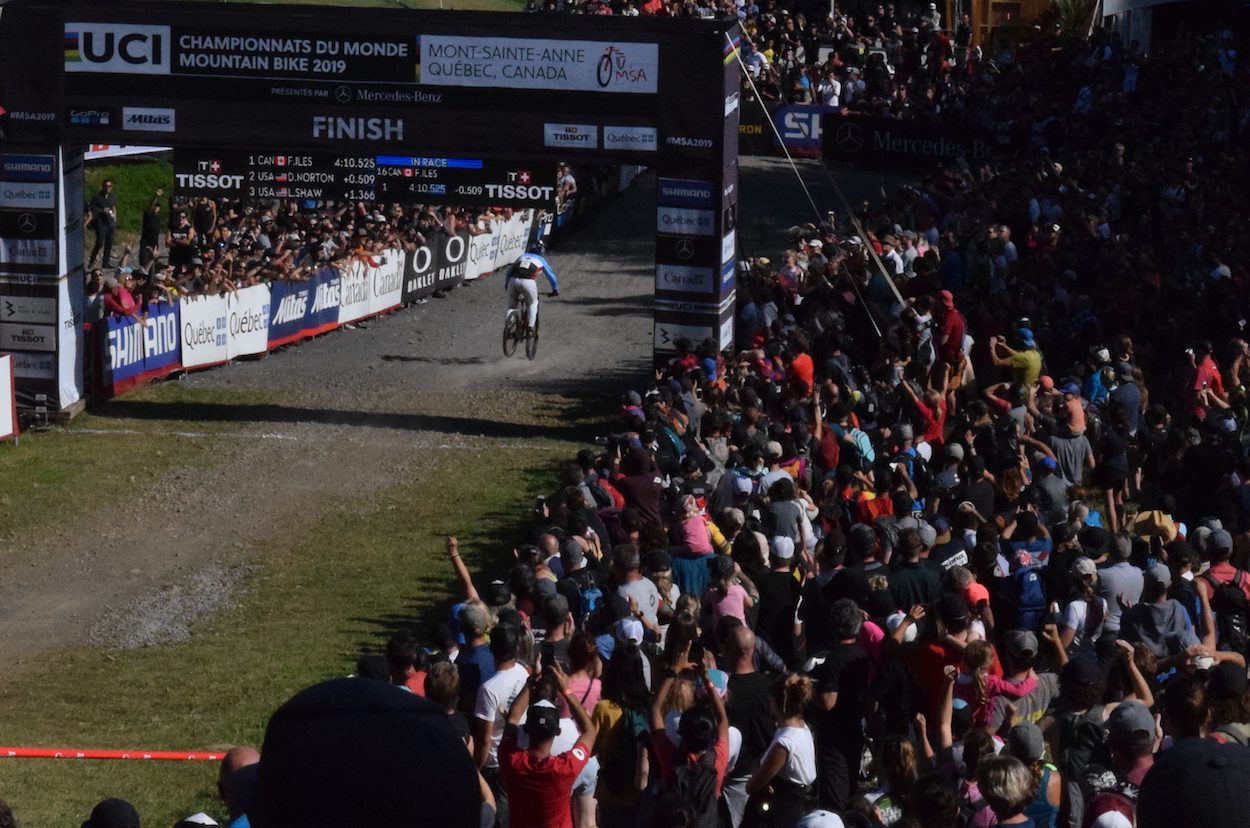 Sam Thibault had one of the more vocal, and well equipped fan sections on Sunday. Chainsaws, posters, pots and pans, and all manner of maple leafs. Not just in Canada, Thibault was racing close to home in Quebec.

“All my amazing crew, my friends, my family was here. So from the top to bottom, people are yelling “go Sam,” it was a crazy run, I’m so stoked .. yeah, I’m happy.” For Thibault, taking the time to enjoy the race was part of the challenge. “My run passed in like 30 seconds, I was on the top and now I’m here. I tried to enjoy the race with all the crew but I’m stoked with my run – the bikes still in one piece. I broke like three wheels in the week, so I’m happy”

“It’s wild – just look up the hill,it’s packed the whole way. You come in and people are just screaming at you the whole time. Feels like you’re a rockstar , it’s cool.”

“Everyone’s chanting my name – it’s super cool!” Woods said after coming fourth Thursday. Woods led the race early which, he said, added extra intensity to the trackside support. “The cheers of being in the front were super motivating, too”

“There was people chanting “Go Emilly! Go Canada.” Johnston said in a post-race interview. “It was just so cool to have the home crowd, I loved it”

“I’m staying with Team BC and the boys are so fun to hang out with. It’s been good times all weekend, keeping my spirits high,” Astle said. After crashing in the rocks, Astle got up to finish 20th in the elite women’s race. “Everyone sees the blue and red, and they know my name and they’re cheering, it’s so cool.”

After crashing hard in Saturday’s training, Sherlock was able to push through lingering aches and pans to finish inside the top-10 for the home crowd. “This morning I didn’t think I was going to race, I was so sore. So I’m happy just to race. It’s so cool to represent my country at home, I love it.”

“It’s great – it’s a little bit more stressful,” the Vancouver Island junior admitted, “but it’s a good time. I’m happy I made it out without crashing”