As gravel grows and changes, what you can expect on course at any given event remains wide open and unpredictable. Pavement? Sure. Singletrack? Why not. Sand? Mud? Maybe even some snow? Bring it on.

All of this makes deciding how to set up your bike for any given weekend tricky.

One rider who knows how to make his bike work is Canada’s Michael van den Ham. While the Abbotsford, B.C.-based racer is most known for his cyclocross success he’s no stranger to a gravel podium, either.

This spring alone MvdH has won the Canadian classic, Paris to Ancaster in April. Van den Ham won again at Grinduro, a very different event, in California and at Lost & Found Gravel in the Sierra Buttes. Between those wins, he also raced the Belgian Waffle Ride and Sea Otter Fuego XC 80, one close to a road race and the other an actual cross country mountain bike race. Then headed home to B.C. for the two-day Okanagan Graveller, where he finished second behind Ian Boswell. All on the same bike.

So, how does the Canadian make his Giant Revolt work for all these very different events? How do you decide what equipment to use at your next gravel race? 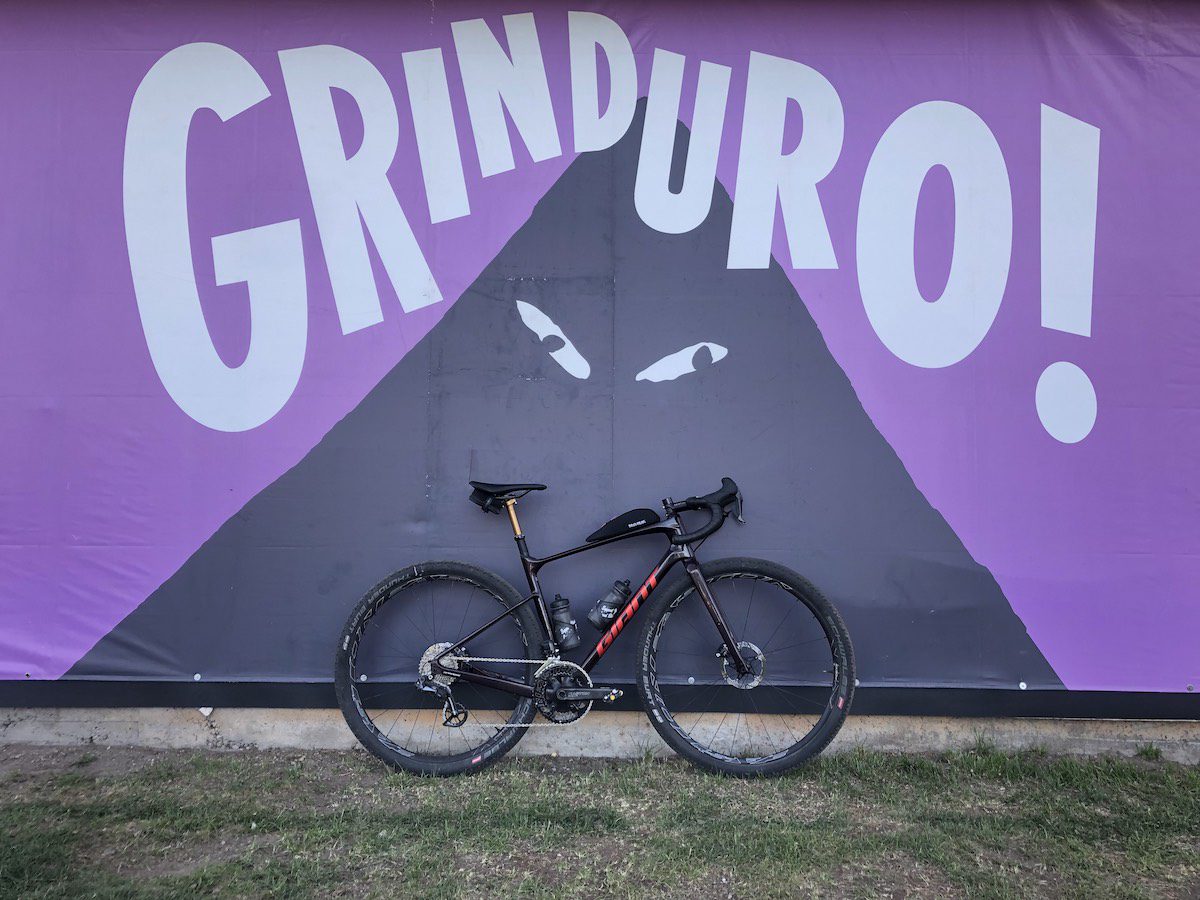 When it comes to setting up his race bike, van den Ham focuses two main features. Despite having a range of Giant bikes available, he doesn’t move too much around.

“For me, wheels and tires are the single biggest difference-maker you can have. The second is the actual gearing of the bike,” the Canadian says. 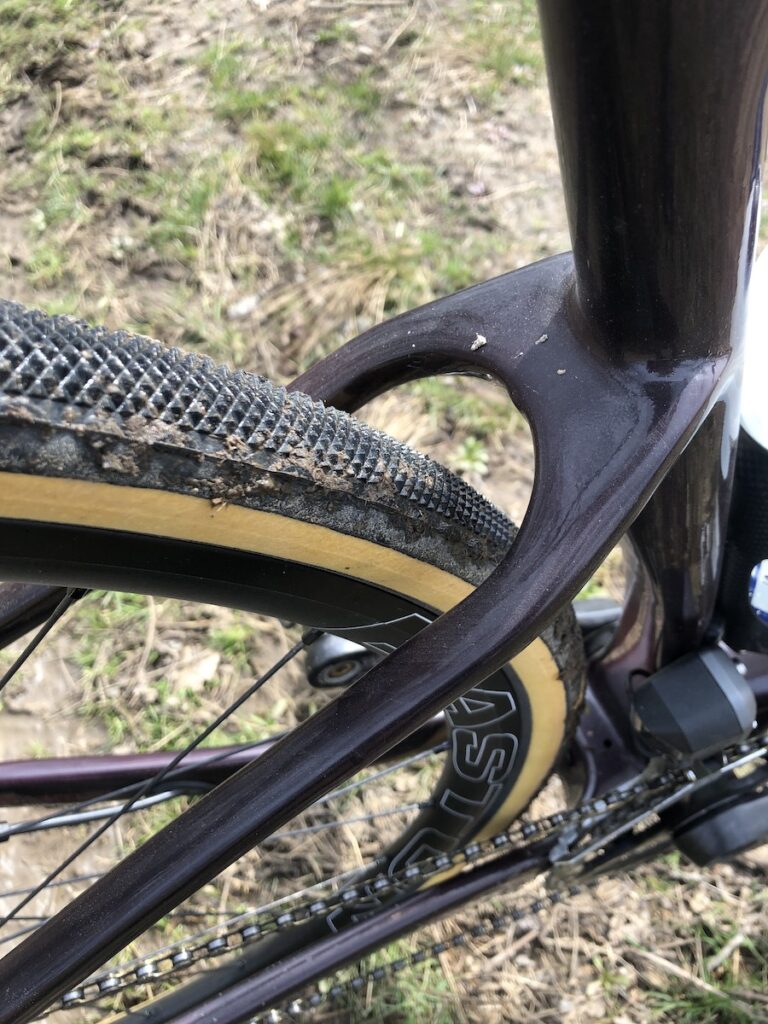 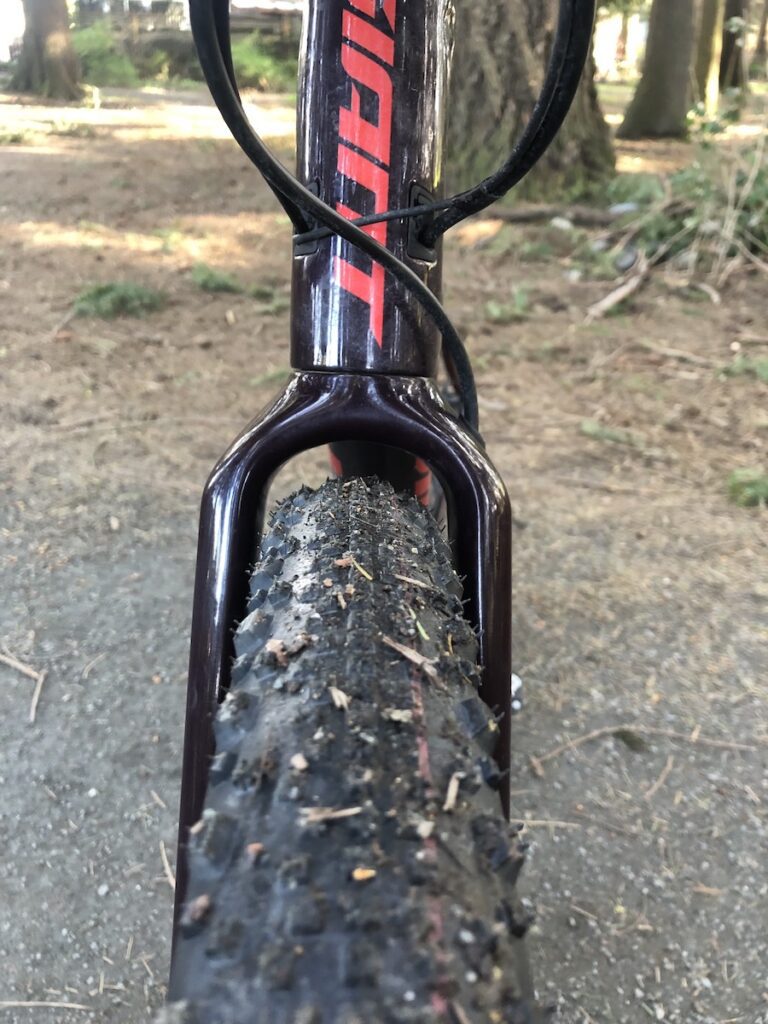 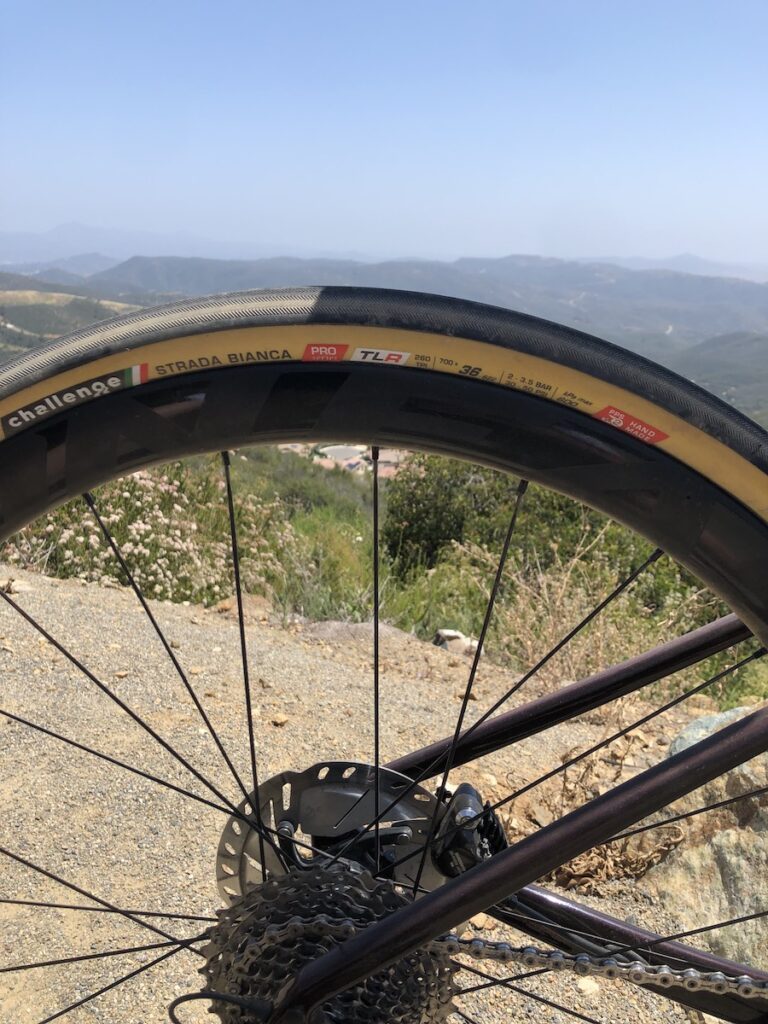 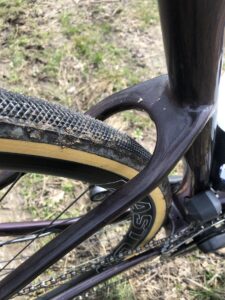 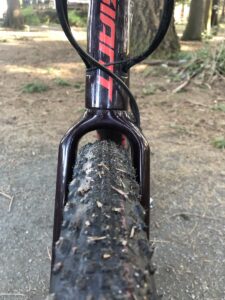 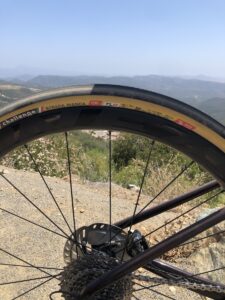 Any cyclocross rider has spent his or her fair share of time talking about tire choice. That focus (bordering on obsession) clearly carries over for the national champs gravel season. He’s already run a wide range of rubber this year.

“There are three different tire volumes I would run, 33, 35 or 40, and then the full-on mountain bike tire. I’ve run all of those sizes at different races this year. Then there are different treads,” explains van den Ham. “That sounds a little complicated, but the beauty is that just changing tire totally changes how the bike feels and behaves.”

So how do you decide what tire to use when you can pick anything from road tires to knobby mountain bike rubber?

“What I’m actually looking at when I’m choosing a tire for an event, I’m looking for how much pavement is in the event. For something like BWR, I went with basically a road slick. But I’m also balancing that with other considerations. At BWR, it can be sandy. Some people ran a lower-volume tire with a side-knob. I opted to run a slightly higher-volume tire, a 35c with next-to-no side knobs (Challenge Strade Bianca) thinking that would allow me to run low tire pressure and just float over the sand better.”

It’s not just a matter of rougher courses equals more volume, though. Back in Canada, he actually ran a lower volume tire for the Ontario mud.

“For Paris-to-Ancaster, it just came down to tire pressure. I ran a 33c tire with more side-knob, the Challenge Amonzo file treads. There’s still a lot of road at P2A, but it tends to be wetter. So I wanted something that was still fast, but would also hook up if I needed it to so I wouldn’t spin out.” 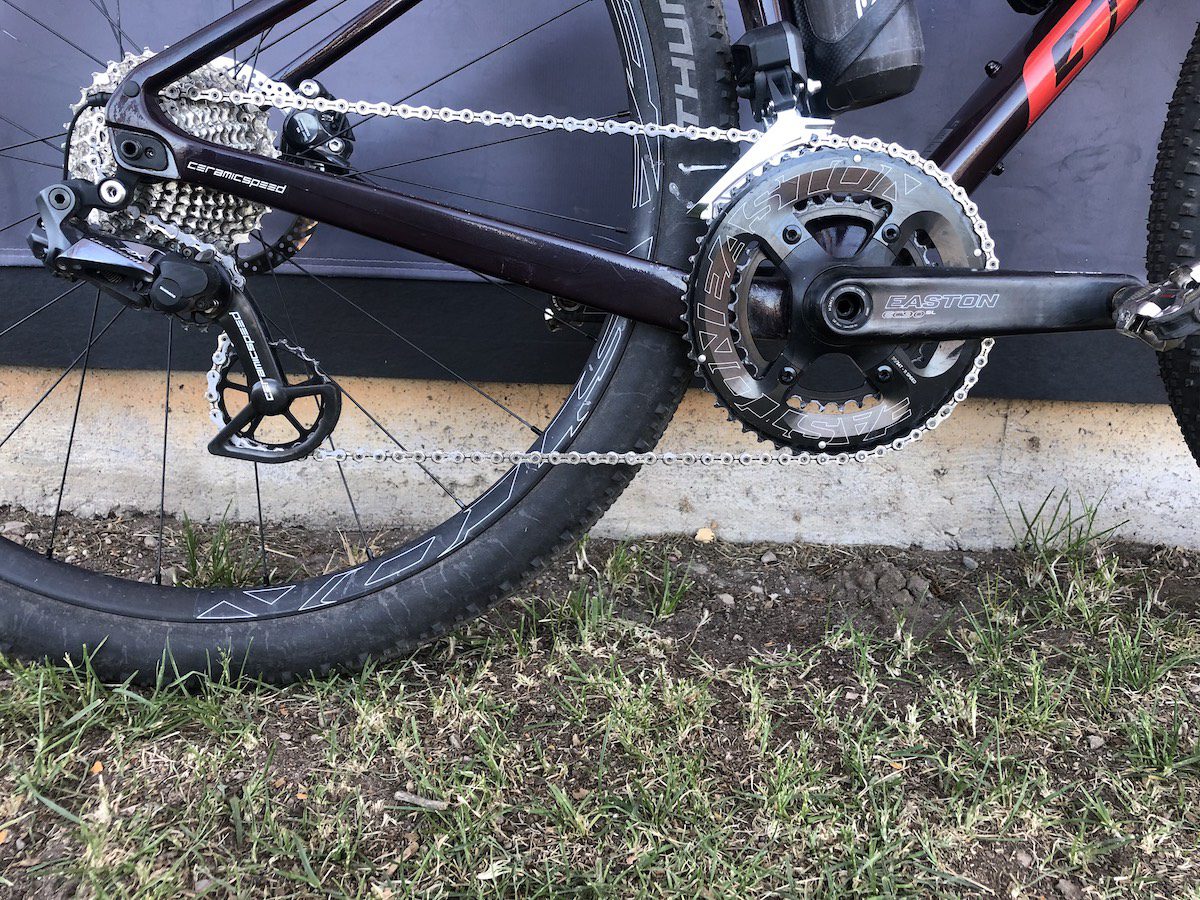 Gearing is the second major factor van den Ham considers when approaching a race weekend. Despite the availability of all kinds of different narrow- and wide-range cassettes, he keeps it simple.

“I’m almost always running an 11-34 cassette for everything. My gearing is as simple as either running compact gearing (50-34) or Easton has these gravel rings that are 47-32.”

With gravel courses ranging from pavement to singletrack surfaces and either Kansas elevation or the steep slopes of B.C.’s mountains, getting that choice right is crucial.

“I’ll use the 50 tooth if there’s going to be a ton of road and I’m worried about spinning out. The small end of that still gives me a 1-to-1 ratio. If I know there’ll be less road, or some steeper climbs, I like the easier bail-out gear on the 47-32.”

The “gravel bikes are just 90s mountain bikes” joke is getting a bit tired, if not necessarily inaccurate. At Sea Otter, van den Ham decided to put that theory to the test. He raced his Revolt with 2.25″ tires in the Fuego XC, an 80-km race that was mostly on singletrack. How did the experiment pan out?

“It maybe wasn’t the best decision I’ve ever made. I liked that it was possible. I thought that maybe it would be faster. I think over the course of that race, given that we did two laps…. I didn’t anticipate that there would be that many breaking bumps.”

After a fast first lap, van den Ham drifted back through the ranks a little on the second lap. But he still finished 27th in a stacked Life Time GP field. It might not have been the best for his results, but the Canadian still says the experience was worth it.

“I think it’s definitely still a mountain bike course, but I liked that it’s possible to do it on a gravel bike. I like how capable that bike is. OK, it wasn’t an advantage or the perfect bike for course, but I could still be competitive.”

While it might not have been perfect for Sea Otter, van den Ham rode the exact same set-up to victory at Grinduro weeks later.

To drop or not to drop?

One key component of van den Ham’s gravel rig is the new Fox Transfer SL (which is identical to the rebranded Eason AX post) dropper post.

“I was maybe a skeptic when it came to having dropper posts on gravel bikes,” van den Ham admits, adding that it changed quickly. “I probably used it one hundred times in Grinduro, at least. I used it in Sea Otter, in Paris-to-Ancaster, it’s just become something I’m used to having.”

Van den Ham spends plenty of time mountain biking during training and was already familiar with dropper posts benefits on singletrack. Still, he didn’t expect the post to be so universally beneficial.

“I thought I’d be going back and forth. I haven’t done a race, other than MidSouth where I did take it off, where I didn’t want it. Even BWR, which has good chunks of road. Anything where there are good, long descents, the dropper posts make sense. ”

How does on-the-fly seat height adjustment make such a difference?

“It just lets you lower your centre of gravity a little bit. I’m not the tallest rider, I’m 5’10, and it still matters for me. But I think for people that are over 6 feet that’s a huge huge difference being able to bring your mass a little lower on the bike.”

Giant’s Revolt has a flip-chip in the frame that brings the rear axle 10-mm closer or further from the bottom bracket. That does two things – change the handling and let van den Ham squeeze big tires in there.

“With the Revolt, because it has that flip-chip, I can actually do pretty drastic things with my tire choice. Anything from 33cc, or road tire if I wanted, to a 2.25″ fits in there. That changes the character of the bike so much.”

“I raced three very different races just in April, and I raced them all on my Revolt. I raced on similar set-ups. All I did for Paris-to-Ancaster was flip the chip in the rear axle to make the bike a bit shorter and put 33c tires on and basically raced the bike the same way.”