Every year the Vancouver Police recovered goods auction includes hundreds of stolen bikes that, sadly, never made it back to their original owners. This year, due to COVID-19 restrictions on public gatherings, the auction has gone entirely online.

While it is sad seeing just how many bikes are recovered but never make it home, it’s also interesting scrolling through the pages and pages of wildly different bikes to see what’s out there. There’s some classic mountain bikes, weird electric bikes, and a fixie that would be at home on the set of Tiger King.

We collected some of the best, and weirdest bikes that are up for auction below.

If you see your long-lost ride on the very long list of bikes, it’s not too late to save it from the auction block! Contact the auction house directly to find out how to claim your ride. 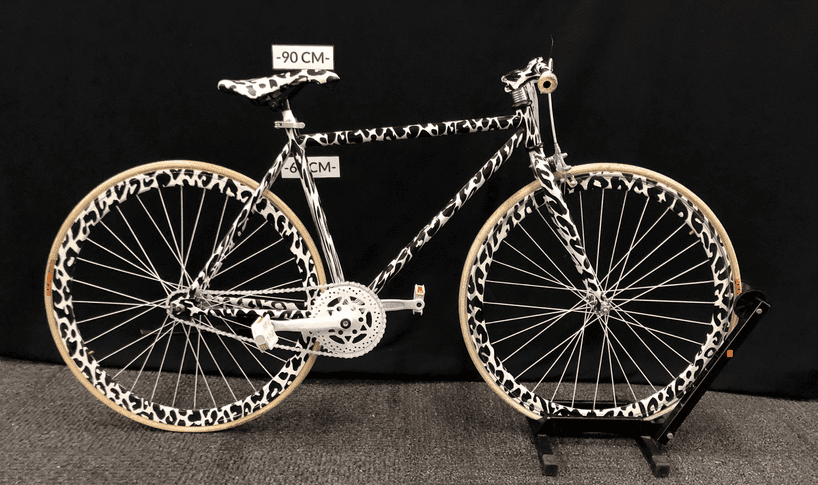 This fixie looks like what Carole Baskin would ride if she’d been in Vancouver, not cruising around an exotic cat zoo on her basket bike. The custom cat print covers the frame, wheels, seat, stem and handlebar. Whoever made this put some time in. There’s even matching white chain, chainring, pedals and embroidered white leather grips. 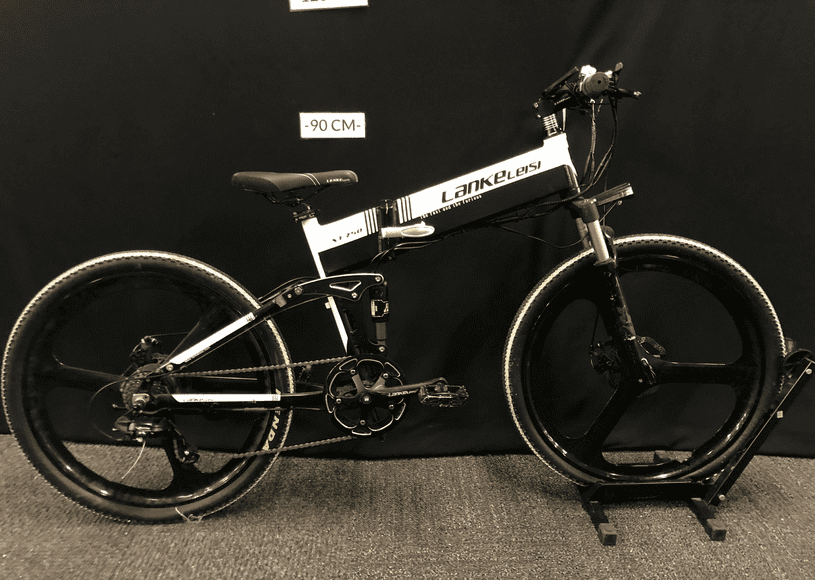 With tri-spoke wheels, dual suspension, and a folding frame, its no wonder this doesn't have dirt tires on. 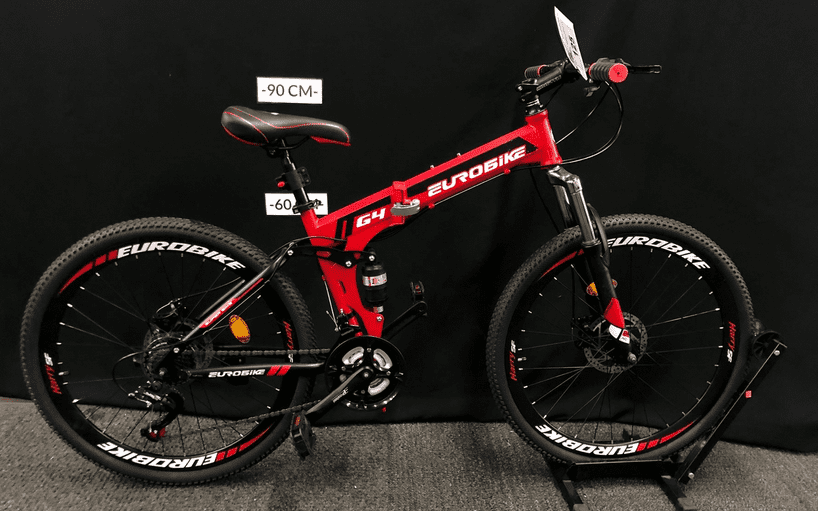 Eurobike's G4 does, though it still doesn't look trail ready. 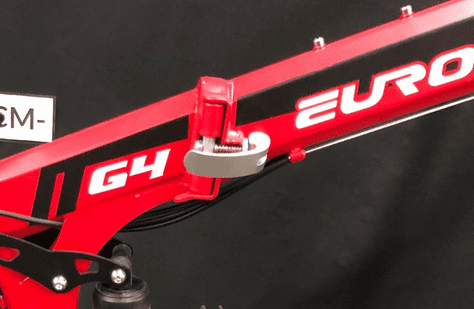 Dual suspension, but wow, that is not where I'd want a quick-release on trail. 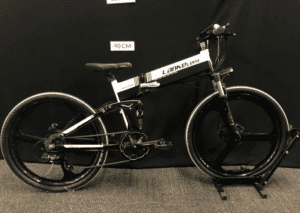 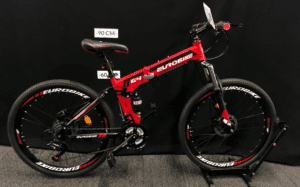 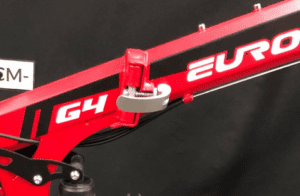 Usually, it’s a bad thing when you’re mountain bike folds in half. Especially in Vancouver, it brings to mind the taco’d wheels and bent frames of the 90s North Shore riding. The people at Eurobike pushed all of that to the side, and decided to make a mountain bike that folds in half on purpose. It doesn’t look tough enough to ride on any proper trails, but there were several of these up for auction, so some people must think its a good idea. 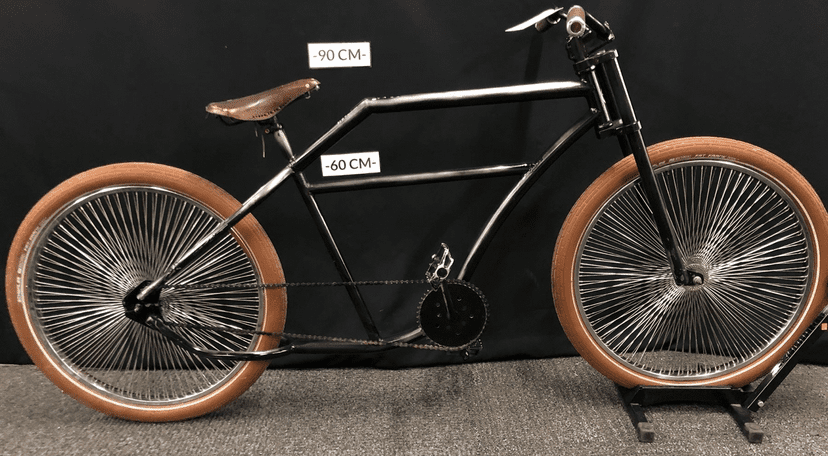 From the drop-cahinstays to the mesmerizing multi-spoked wheels and homemade frame, this stretch bike is weird all around. And I kind of want it. 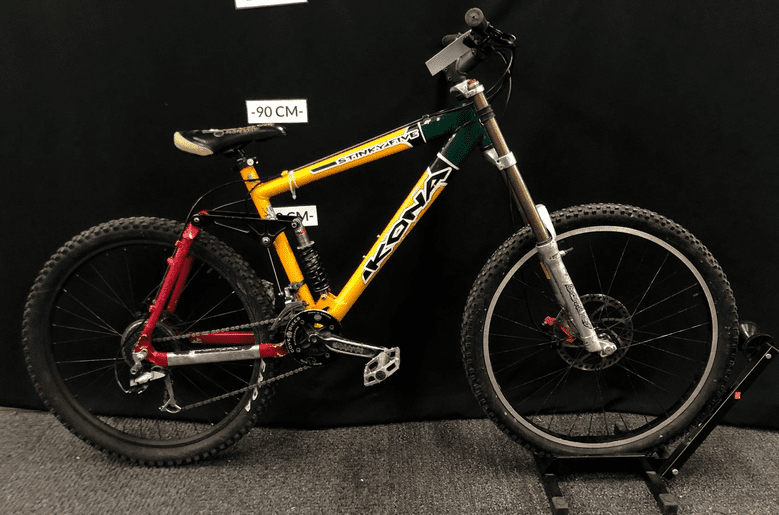 Kona's Rasta colour scheme and Stinky frames were iconic when they came out the in early 2000s. There are several different Stinky models up for auction, but this Stinky Five gets top honours for its paint. And for its triple crown fork and front derailleur combo. 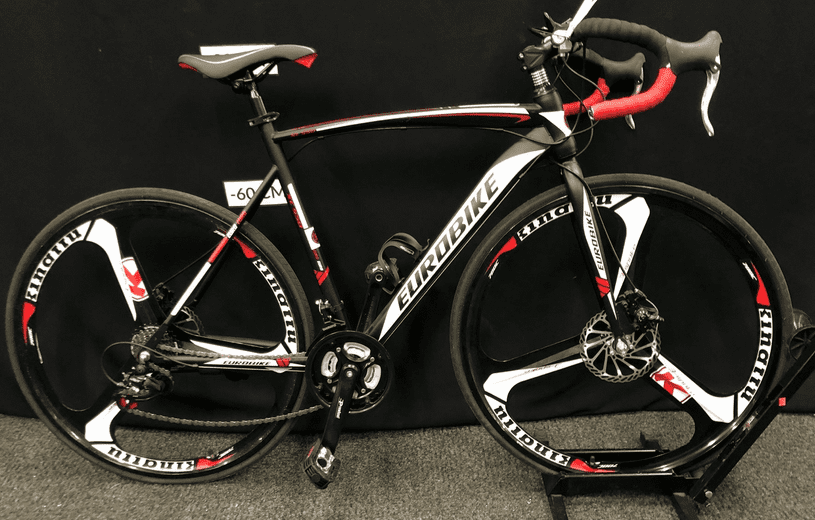 The description for this tri-spoke Eurobike XC550 just says "Very heavy bike" in all capital letters. 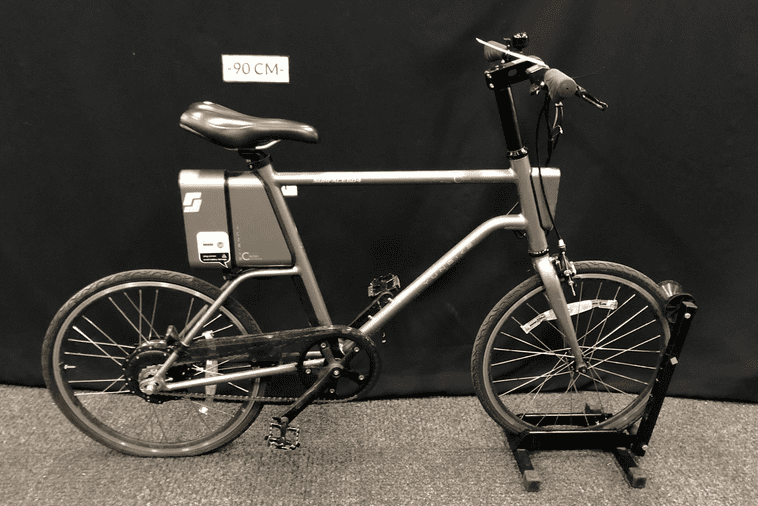 This Yunbike Surface 604 ebike has cool futuristic lines, integrated lights and ... no charger, no key, and no confirmation that it works at all. But, if you're looking for a neat commuter, it has a very urban sci-fi look. 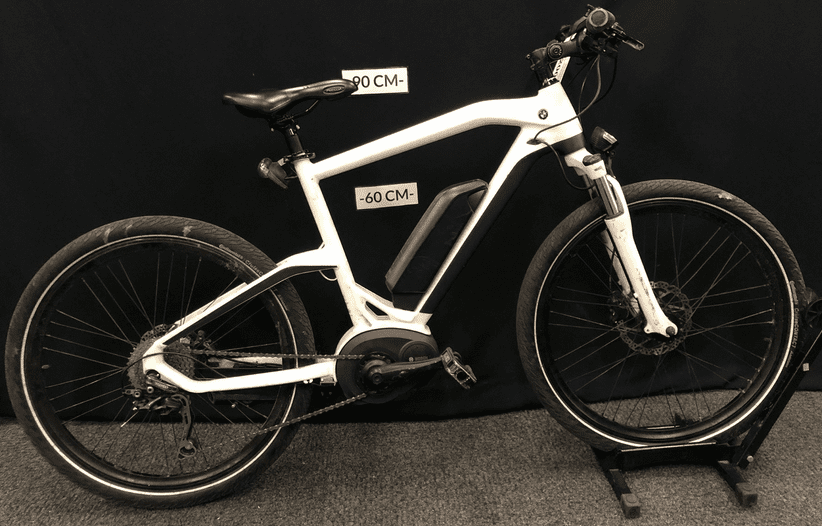 This Bosch BMW also goes for the weird e-bike lines. Currently at $600, it could be the only BMW I can ever afford. 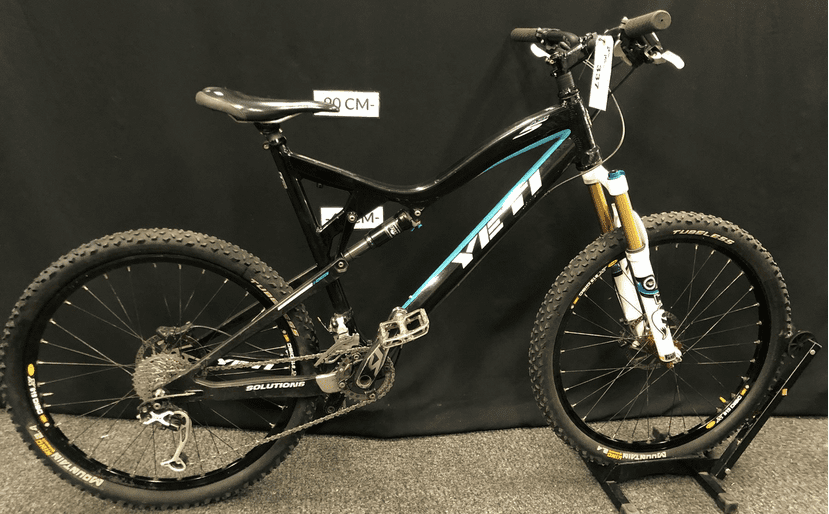 This Yeti ASR5 is decked out in Shimano XT and Saint kit and Factory series Fox fork. It's not new, but whoever lost this probably misses it. 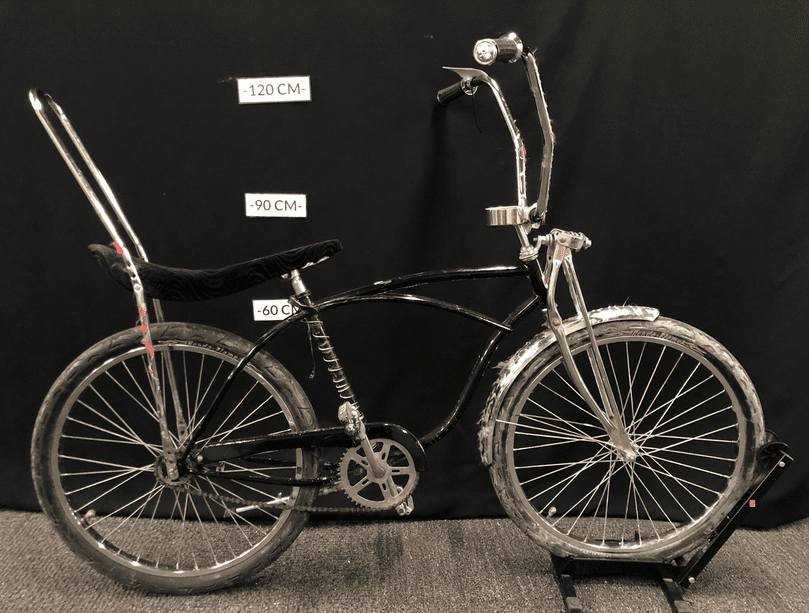 This black and chrome custom cruiser has seen better days. But that banana seat and ape bar combo would still look great if someone cleaned it up a bit 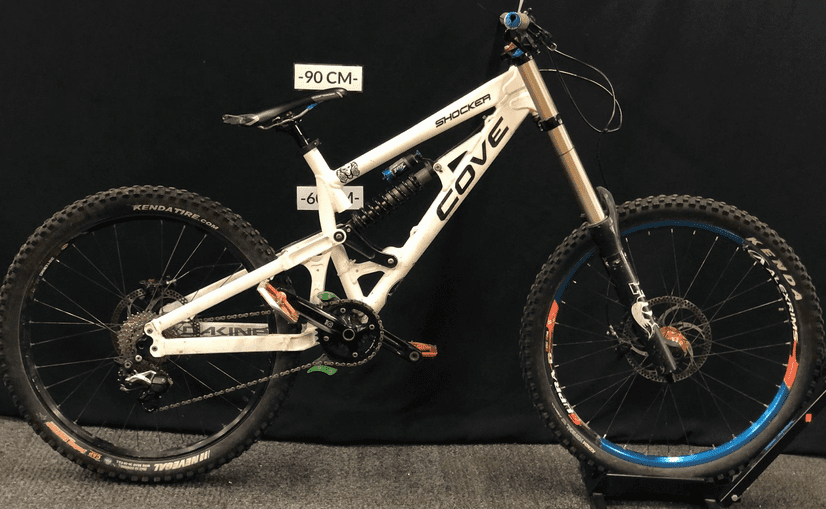 Cove is a local Vancouver brand that made bikes specifically for the North Vancouver riding style. This white Shocker is only $500 right now, but with Cove no longer making bikes, it'll be hard to replace. 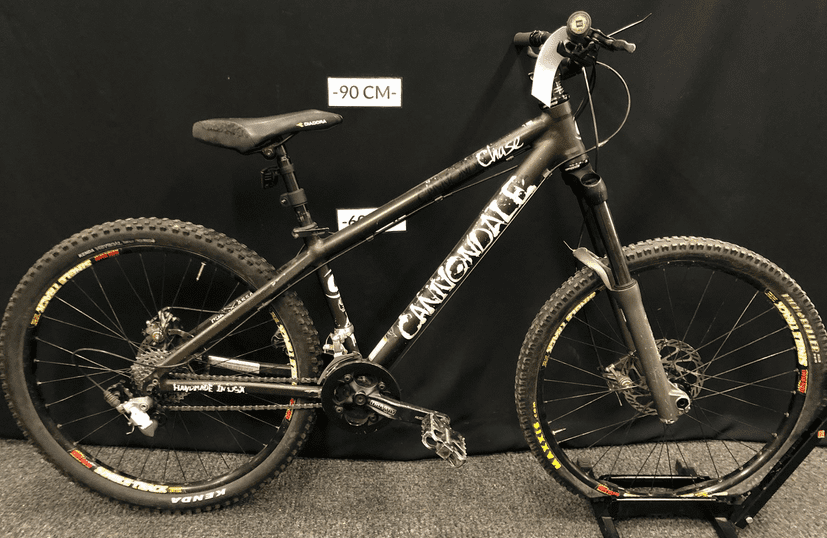 Cannondale's made-in-America Chase hardtail was the signature model for Aaron Chase, the street and freestyle icon of urban mtb's heyday. It looks weird now, with its abrupt front end and tiny wheels, but it was real cool back in the day. I promise. 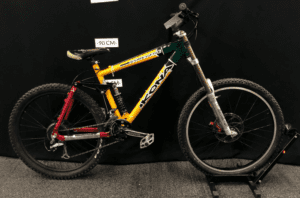 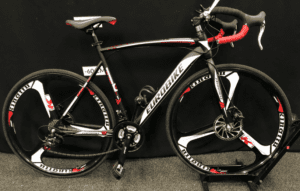 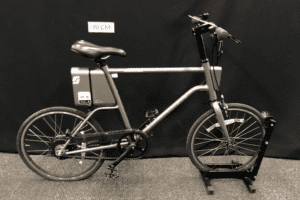 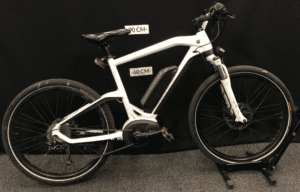 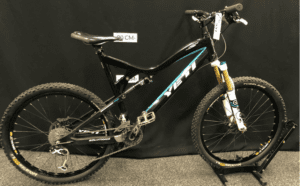 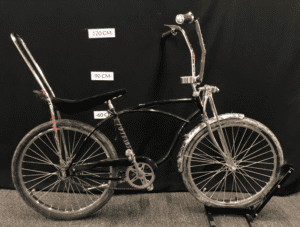 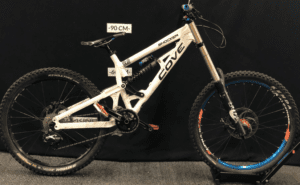 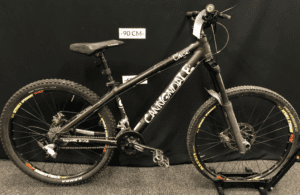