When the pandemic first caused race cancellations, many speculated that WorldTour events would move to Zwift. Now, a few months in, Zwift has hosted events with a handful of WorldTour teams and races with some notable riders. While these races and events have a novelty to them, the number of pro riders participating in Zwift events pale in comparison to the Digital Swiss 5—the Rouvy race which will feature fifteen WorldTour teams, two ProTour teams and the Swiss national team.

Throughout the past few months Rouvy has signed a massive contract with Ironman and it will be the platform for the upcoming five day Digital Swiss 5 stage race event.

Zwift is unquestionably the most popular indoor riding program and employs almost four times as many people as Rouvy. Yet Rouvy, the digital racing underdog, was chosen to host a race with what is likely the most pro cyclists to ever compete together virtually.

“Rouvy is not a replacement for outdoor racing,” says Petr Samek, the company’s CEO. “We don’t want to replace outdoor with indoor, or replace real with something virtual.” He insists that the program is great for the off-season, or the winter, “but the goal is to motivate people to ride outdoors.” 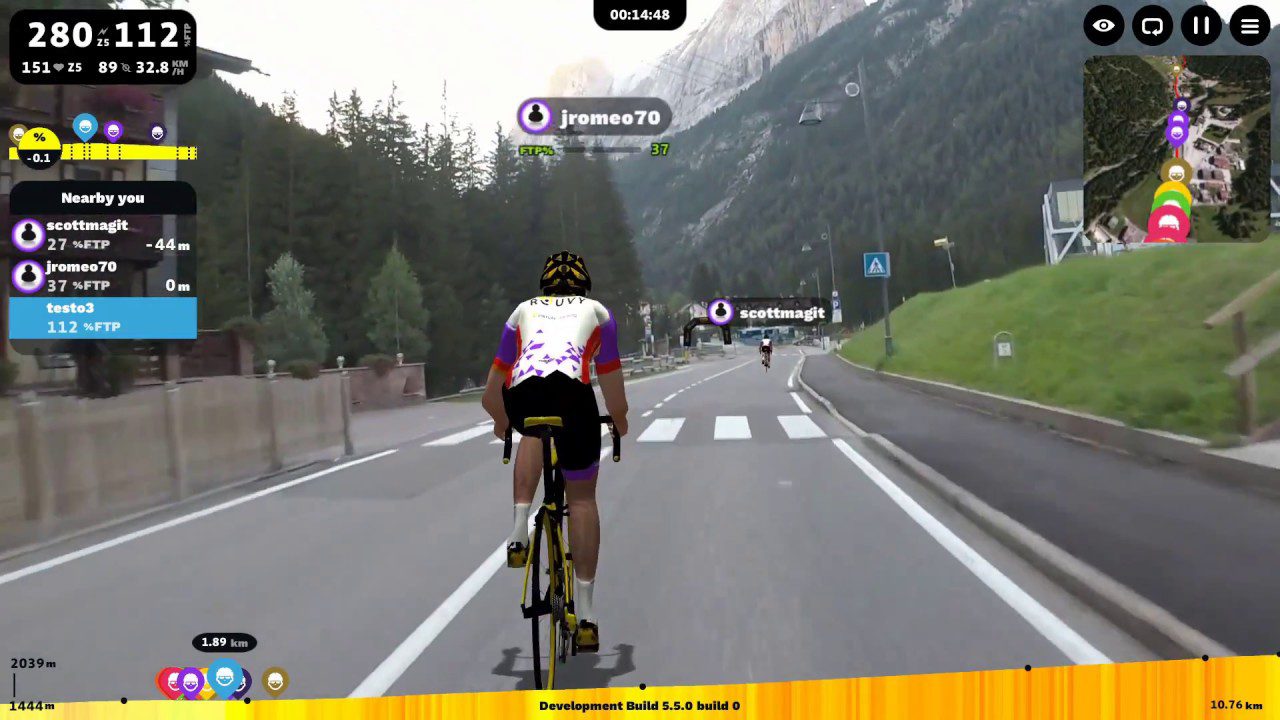 The app uses a technology they call Augmented Routes (AR). Footage from real roads is used to create a rideable course with accurate elevation profiles. 3D items like finish gates and side barriers are added to the courses and the user’s 3D avatars cycle along the route. The result is pretty immersive, and a cool option for those looking to explore the world while riding real routes.

There are over 3,000 routes available on the program, but Rouvy employees aren’t driving around in a Google Maps car recording footage for each of them. The company advertises their service to race organizers as a means of promoting their events. “This is a technology we offer to organizers of small and big events around the world,” says Samek. “They are able to create the footage for us without super-specialized equipment.” 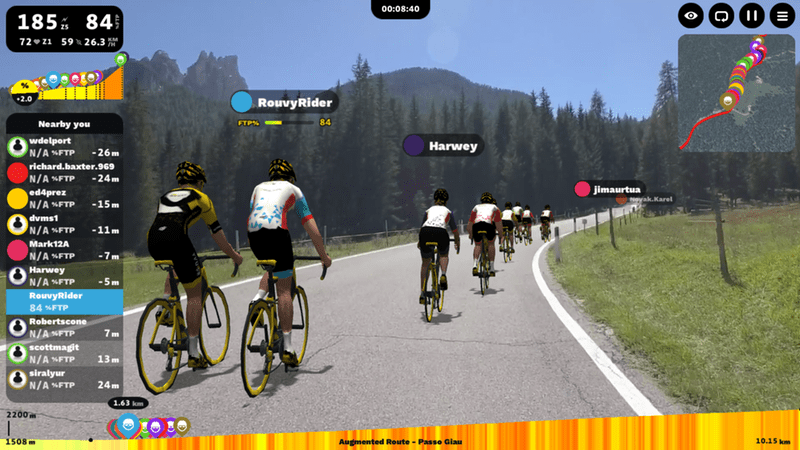 Involving organizers of real events has allowed Rouvy to bridge the gap between outdoor and indoor riding. The collaboration helps organizers promote races year round, sell advertisements to sponsors on the 3D barriers and market themselves to potential new participants. In return Rouvy gains new users and adds the routes to their growing collection. Its approach is scalable, and works for the smallest to biggest events.

The final version of AR only came out in 2019, but, as we are now in a world-wide ‘off season’, communication with organizers has accelerated and races such as the Digital Swiss 5 was quickly planned and created.

Keeping race organizers in the equation is what has allowed Rouvy to bring on multiple WorldTour teams for single events. While platforms like Zwift are directly liaising with one or two teams, race organizers—who have open schedules and experience with pro-level events—will do whatever they can to salvage the cancelled races.

Rouvy can develop a new course in a few weeks, meaning racers can compete on the ‘actual’ course, rather than a digital world associated with the race only by name.

RELATED: The pro (and not so pro) trainer setups of the Virtual Tour of Flanders

For viewers, the AR course is the closest thing to watching a real race available right now. Although pro riders are digital, the course footage is real, and the climbs follow the same profiles that fans know and love. Rouvy focuses on replicating actual cycling experiences, so the goal is getting as close to the real thing as possible.

E-racing is a sport in itself. Just like any other sport, it presents unique challenges and requires practice. Zwift has developed its platform for the sport of indoor cycling, and already has a culture of ‘pro’ racing, with notable racers, famous routes and notorious climbs. Most WorldTour cyclists are out of their element in the digital world. Many train year-round outside—some are setting up their trainers for the first time this year. When Zwift-addicted triathlete Lionel Sanders beat Mathieu van der Poel in a Zwift race, cycling fans realized that the world of e-racing was its own beast.

Rouvy, on the other hand, unabashedly admits it is secondary to riding outdoors. It’s the perfect platform for an event to salvage some of its physical identity, while staying afloat throughout the pandemic. The racers compete against their outdoor competition, in a familiar environment. Right now, the closest-to-the-real-thing is a comfortable place to be. Cyclists, organizers and fans will gravitate towards what they know, and Rouvy will do its best to replicate it.