The elite men’s road race at the 2019 UCI Road World Championships in Yorkshire was a very hard race. The distance combined with the weather for one of the hardest race days of the season. At the finish line, riders were left battered and shivering from the frightful conditions. None of the six Canadians to start the race finished with Michael Woods going to deepest and Hugo Houle riding in the 11 man breakaway that formed early in the 262 km affair. Only 46 riders of the 197 that lined up in Leeds finished. 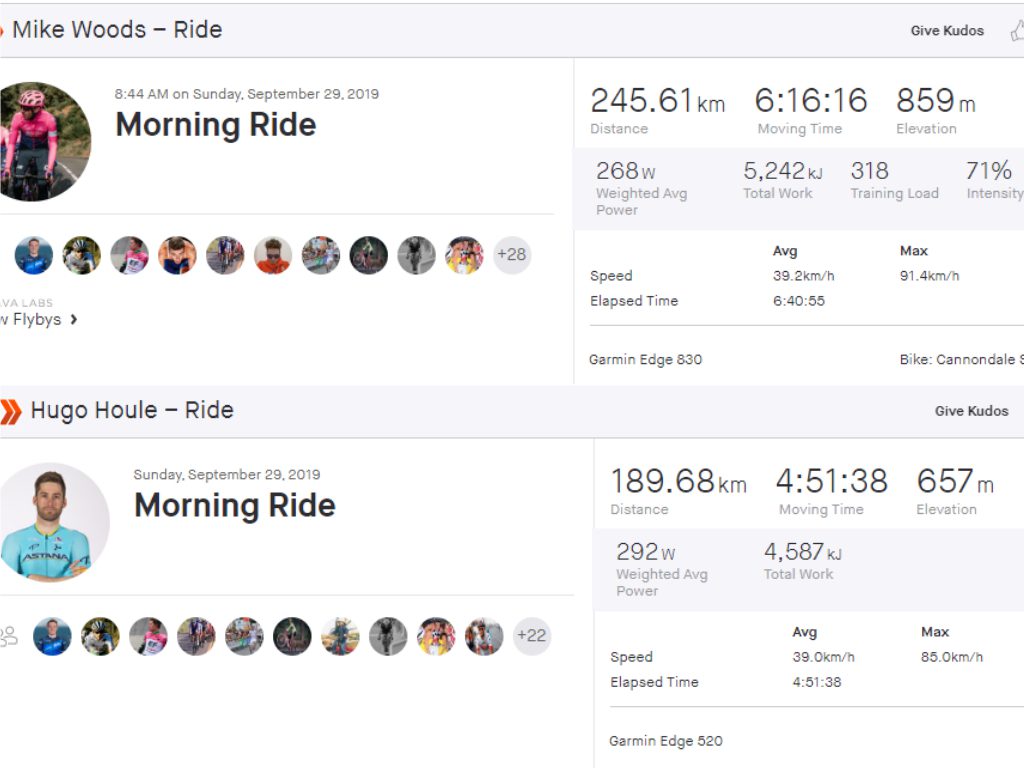 Both Woods and Houle posted their world championship rides on Strava revealing the tough efforts they made in the horrendous conditions despite not even being in contention at the end of the brutal race.

The conditions made an already hard day in the saddle even tougher. The course was also tricky with no major climbs but constantly undulating roads, twists and turns to go along with punchy ascents and fast descents. Houle infiltrated the 11 man breakaway that formed in the early going. While they had to navigate flooded roads and horrifically brutal conditions, Houle put out a solid effort to make it into the escape.

In an hour-long period of riding in the breakaway to build up a gap, Houle averaged 294 w with some tough spikes of over 800 w. As the breakaway held a slender gap to the peloton as they approached the finishing circuit, Houle then put out 264 w over 1 hr 40 min. In comparison, Woods who was sheltered in the peloton had an average of 220 w for the first 3 hr 30 min of racing. While television coverage cut out because the broadcast relay airplane needed to land for refuelling, the breakaway was absorbed. Houle would drop out after three of nine laps on the circuit. With the temperature hovering around 8 C and relentless rain, riders who fell out of contention quickly sought out the warmth of their hotels. 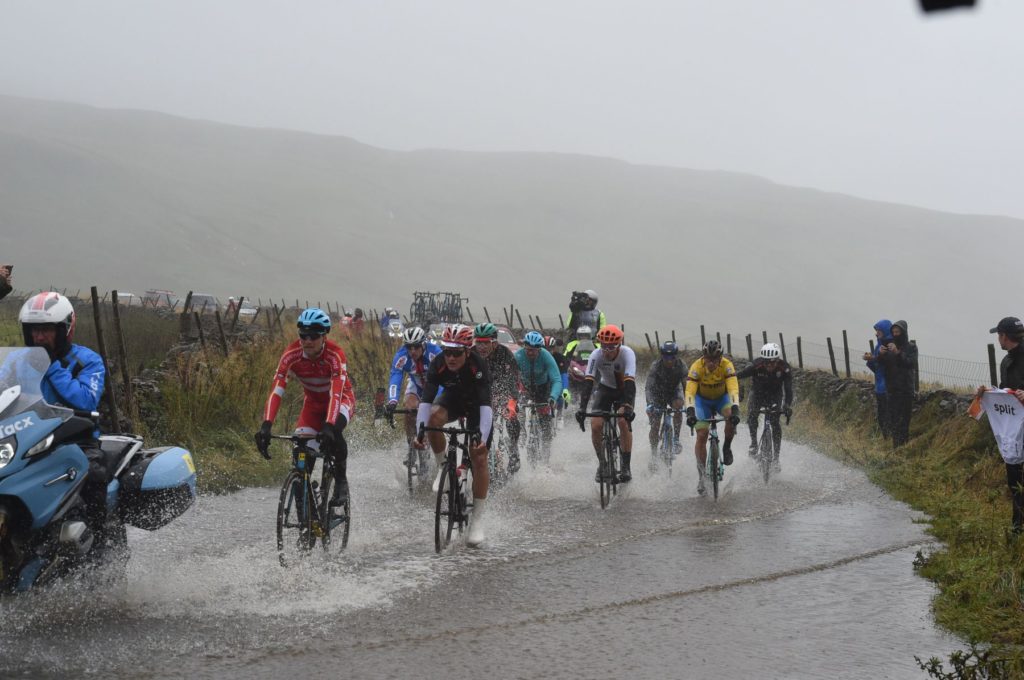 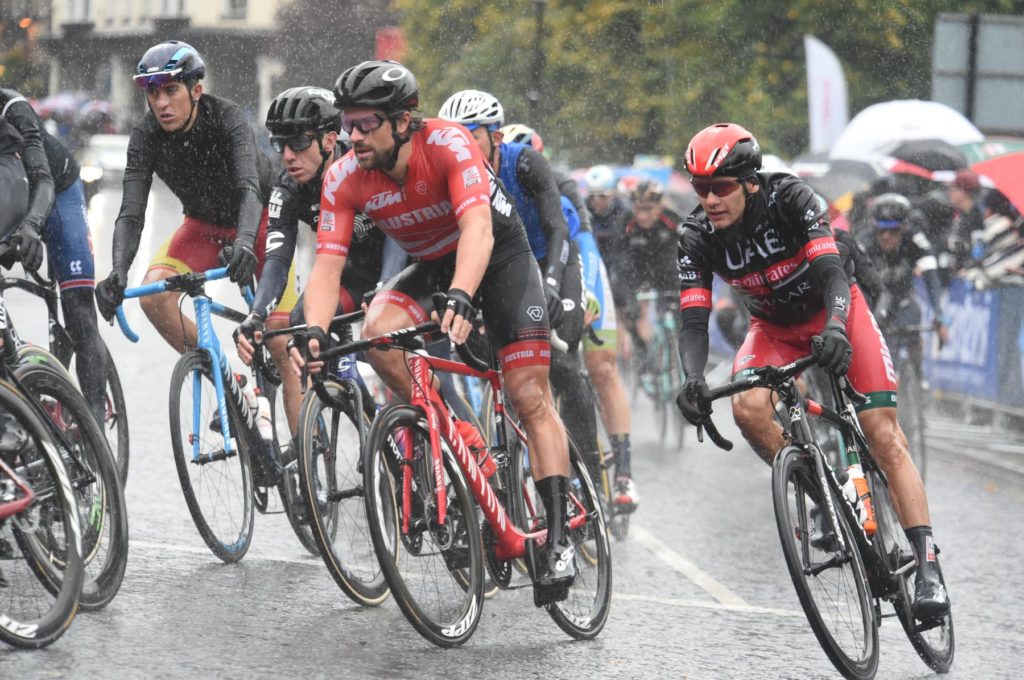 Woods tucked in the peloton. 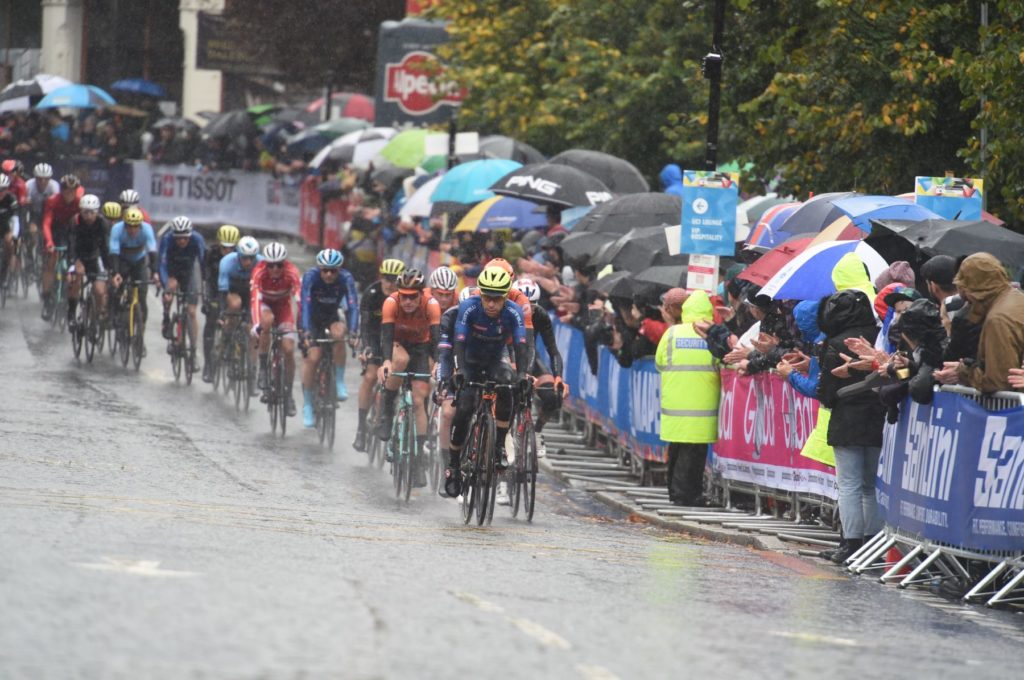 The umbrellas were out in force along the roadside. 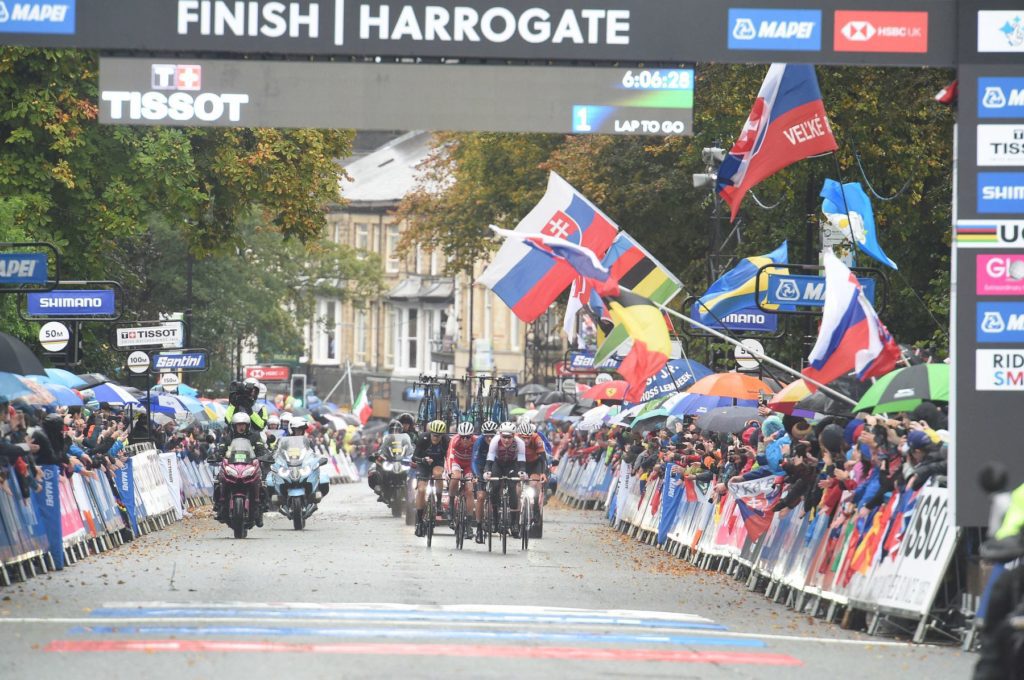 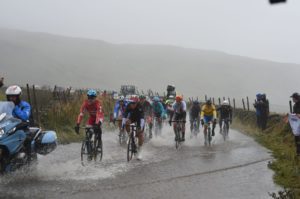 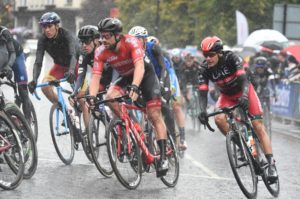 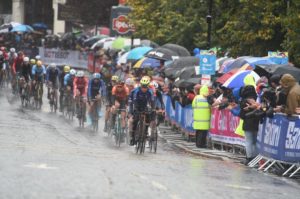 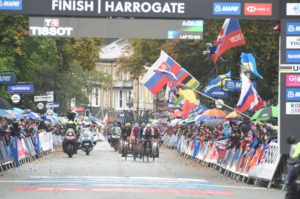 In the first laps on the circuit, Houle averaged 253 w with some hard efforts like a 2 min 30 sec ascent at 445 w of Harlow Rd which is 1 km at 5.5 per cent. Woods meanwhile would complete seven laps on the circuit but the punchy power course and the cold were not to his strengths. Over 1 hr 47 min when the racing was hot on the circuit, last year’s bronze medalist averaged 260 w but with constant all-out sprinting efforts out of corners and up little climbs where his power spiked into the 800 w. The fatigue was accumulating and Woods soon was seen on television cameras popping off the back of the peloton.

For the whole day, Woods weighted power according to Strava was 268 w for 6 hrs 16 min while Houle’s was 292 w for 4 hr 50 min. The Harrogate finishing circuit may have lacked long climbs but was certainly unrelentingly hard especially when you factor in the sub-10 C temperature and torrential rainfall the peloton dealt with throughout the day.

Michael Valgren, world champion Mads Pedersen’s teammate, finished sixth in the road race and posted his ride on Strava. His power numbers give insight into what it took to be in contention at the end of the race. Valgren averaged 256 w over 6 hr 30 min. On the finishing circuit, his heart rate was 138 bpm average for 3 hr 20 min with his max hitting 164 bpm. In the last hour of racing, Valgren averaged 293 w. In the final 6 km, Valgren tried to cover a Peter Sagan attack and averaged 374 w peaking at 922 w over a 9 min effort.  Valgren’s weighted power was 294 w for the 6 hr 53 min he spent in the saddle. Considering this came after over 6 hrs of racing in sub-10 C conditions and the cold, it shows how insanely hard the race would have been for the finishers bodies.

While the power numbers from the day were not the most eye-popping of the season, considering how cold and wet each and every rider made it clear that making such big efforts over 6 hours of racing would have really taken a toll on the mind and body.