For many young Canadian cyclists, racing is an important part of summer vacation. Events are an opportunity for juniors to test the progress they’ve made since last season and a way to socialize with other cyclists. This year, summer vacation is looking a bit different but an initiative spearheaded by the Saskatchewan Cycling Association is giving Canadian juniors the chance to reclaim some normalcy in an uncertain climate.

On May 24, the first-ever Canadian Junior Virtual Cycling Series took place. This ongoing series will take happen every Sunday afternoon and feature courses based on real Canadian classic road races for junior racers. The pilot program was started by Saskatchewan Cycling Association but has been embraced by Cycling Canada and the other provinces as exactly what is needed in Canada for young racers right now. Keeping the competitive fires stoked and the passion for the sport high has never been more important, and bringing juniors together in a virtual setting is key to continuing their development as athletes.

“It was really nice to just be able to race and to see my training pay off in a way,” says Saskatchewan’s Lucas Bryson, who finished seventh in the under 17 field.

Without racing, provincial and team coaches fear that motivation will start to wane in the athletes who spent the winter training for the upcoming season — making this alternative virtual race option more critical than ever.

Registration for the races is free, and the courses used for the races simulate road races throughout Canada, from the race experience to the elevation gains. The RGT online platform is set up to offer the most realistic racing simulation possible, in order to allow these young athletes the chance to practice tactics, deal with mishaps and defeat, and earn the glory of a finishing sprint. Mimicking the classic Canadian courses (that the juniors will contend with when road racing returns) makes the racing feel more realistic.

The first race in the series took place in the heart of the Qu’Appelle Valley in the southeastern part of Saskatchewan. Next week’s course will be based on a famous road in Atlantic Canada, and similar to this weekend’s, will be roughly 40 kilometres long. The series will also include the famed Hayman Classic course as well as the Canada Games course.

RGT allows riders to use tactics, and the junior racers used pack racing, small breakaways, and huge solo efforts in order to secure better finishing positions. “My strategy was surging and using that in the race to carry myself forward while spinning fairly easy after putting down two seconds of effort,” says Andrew Ellyatt, an Ontario racer who finished eleventh in the under 17 category. “It was a good race and I had fun!”

“The race was tons of fun, even with the small field it was exciting racing, and much more similar to actual road racing than a Zwift race,” added Ontario racer Gregory Cuff, who finished second in the junior men’s category. “I didn’t really have a strategy, since I wasn’t sure what to expect. In the last couple kilometres though, I tried to stay at the back of our small group of 3, so I could get the slingshot effect from the draft in the sprint — which seemed to work out pretty well!”

Virtual racing at home in the prairies

It’s no surprise that this series was organized by the Saskatchewan Cycling Association. Virtual racing has a rapidly-growing importance in Saskatchewan’s cycling community, thanks to long, harsh winters in the prairies forcing cyclists to get creative with their training tactics. 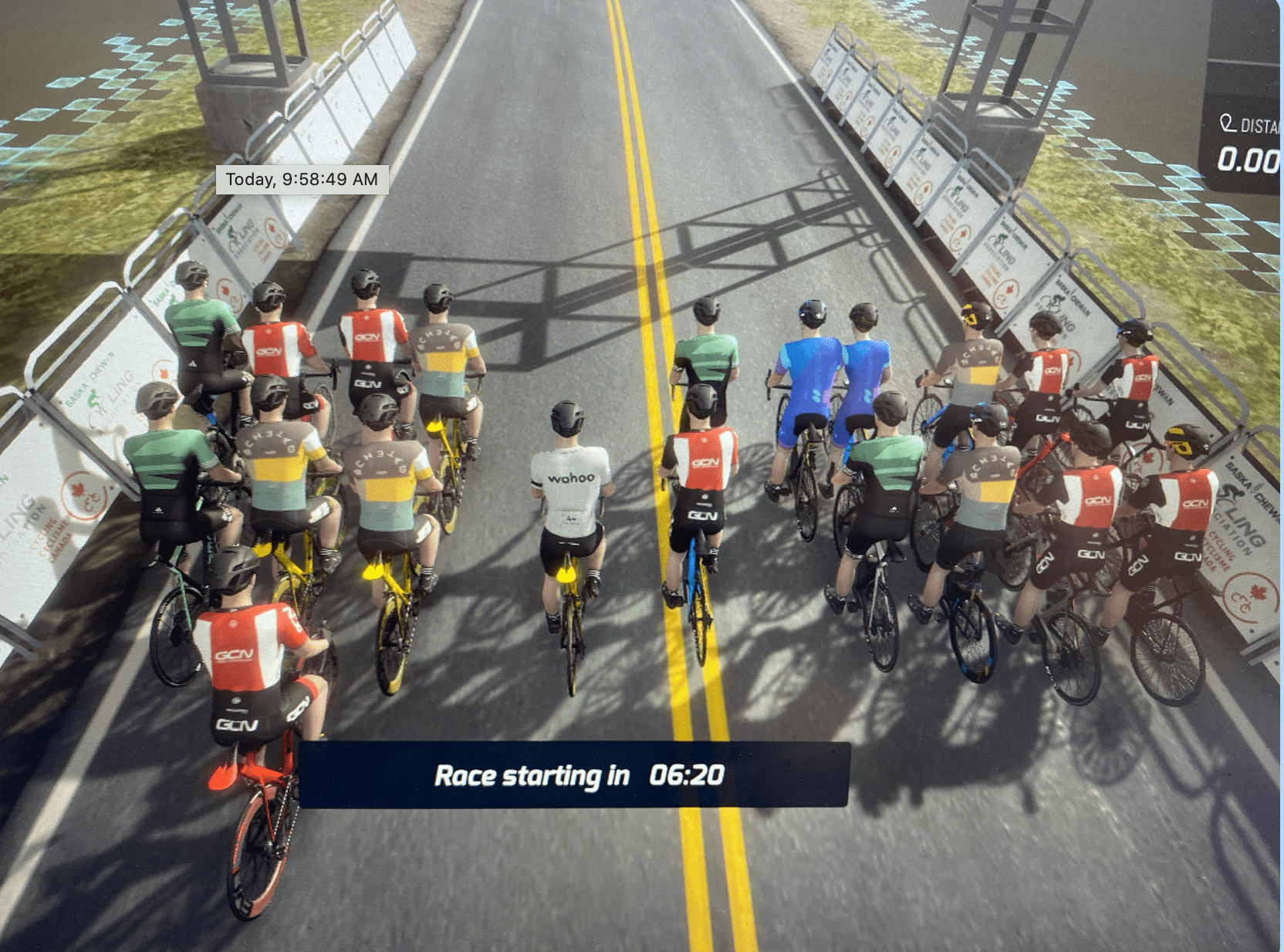 This past winter and spring, two virtual series were run in the province and attracted hundreds of racers. Seeing the success of these winter virtual events, Saskatchewan Cycling Association Performance Program’s head coach Russell Down worked with the young racers on the Performance Cycling Team in Saskatchewan to create an opportunity for juniors across the country to come together each weekend to race.

The weekly event is still growing and the Saskatchewan Cycling Association is seeking sponsors to help expand the series’ reach and offer prizes to podium finishes, and fund power meters and trainers for young athletes who currently don’t have access to the equipment needed to race.