Egan Bernal, Geraint Thomas and Chris Froome won’t win a Grand Tour for Ineos this season, but their young English teammate Tao Geoghegan Hart set the table to become the team’s fifth Grand Tour winner on Saturday’s final road stage of the 2020 Giro d’Italia. Jai Hindley might have seized the pink jersey from teammate Wilco Kelderman, but he’s tied on time with Geoghegan Hart, and Geoghegan Hart is the better rider in the race against the clock.

You can find out where to watch the Giro here.

Earlier in the week, it was revealed that the French authorities had forbidden not only the Giro from entering France on Saturday, but also the Vuelta a España on Sunday.

So the Agnello and Izoard were cut from Stage 20, and the race would climb Sestiere thrice–once from a side that would make for a 31.8 km, 4 percent ascent before two passages of 6.9 km at 7.2 percent each. It would be a much easier day. 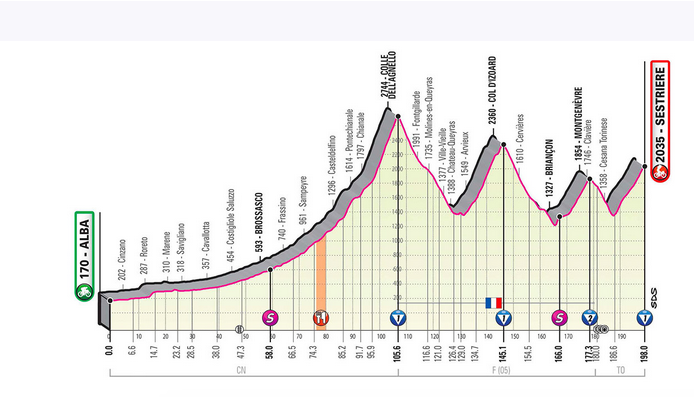 It's Saturday, which means it's time for the final mountain stage of the #Giro: 190 kilometers from Alba to Sestriere and three classified climbs. We start the day with two riders in the top 10: @JooAlmeida98 (5th) and @masnada_fausto (9th). pic.twitter.com/xrHTOFaZZ6

A seventeen-strong breakaway formed soon after the start in Alba and at the peak of the first, long climb of Sestriere, its gap to the peloton was 4:15. Astana had pulled the pink jersey group earlier, but Ineos grabbed the reins near the crest.

The peloton is making its way down the snaking and twisting descent, with @martijntusveld, @SamOomen and @ChrisHamo_ still up there to support @W1lcokelderman and @JaiHindley.👍🏻

Out front, the break have 3'55" over the bunch with 43km to go. pic.twitter.com/wRCmFsXsGo

Tenth place Rafal Majka–off to UAE Emirates next season–was the first big name to disappear from the favourites’ group. Ineos was burning its matches. Kelderman popped with 30 km to go and soon Hindley was the virtual leader on the road.

Rohan Dennis, teammate Geoghegan Hart, and Hindley went over the top 43-seconds ahead of Kelderman, Domenico Pozzovivo, Nibali and Almeida.

There were still breakaway riders in the lead. The Dennis-Hindley-Geoghegan Hart power trio overtook them with 9.2 km to race.

Hindley’s first attack came at 3.5 km remaining, but Dennis closed the gap. The second burst was at the 2.5 km to go mark. Hindley couldn’t break his English rival and Dennis came back to them. Dennis went backward again and Hindley and Geoghegan Hart went under the kite shoulder to shoulder.

Hindley led out and Geoghegan Hart came around him for the win. Although both riders arrived at the race as support riders for better-known heavyweights, they lead the race at 85:22:07, the first time in Giro history two riders have been tied on time with one stage to go.

The Giro concludes on Sunday with a 15.7 km time trial into Milan.