Few images have been so utterly interconnected with a mammoth cycling victory than the panda-costumed fan running behind Dan Martin and Joaquim Rodriguez just before Martin’s winning attack in the 2013 Liege-Bastogne-Liege.

The panda bear theme became a craze in cycling circles and a totem animal for Martin. That season, he was drowning in pandas at the Tour of Beijing. The next season his squad Garmin-Sharp wore a 2014 jersey with a little panda bear on the back for the team’s new sponsor, the World Wildlife Fund. Later he rode a specially painted Specialized Tarmac dubbed the “Emerald Panda”.

Funny thing: Martin didn’t even see the panda-costumed fan even though photos and footage seem to depict the Irishman looking into its oversized, slightly-melancholy eyes. Martin told Cycling Weekly: “The first thing I knew about it was when people started messaging me on Twitter afterwards, saying what had happened and I was sat there saying ‘what the hell are they talking about?’. Then I saw the image of me looking around at where it is. But I was looking behind to see where [Michele] Scarponi and [Alejandro] Valverde were. All I saw was someone running behind me. I was thinking ‘get out the way’, as I couldn’t see Valverde potentially coming from behind. I didn’t have a clue it was a panda. It would have broken my concentration completely had I know it was a panda. I just thought it was an idiot running up the hill.”

The story of the race’s climax includes Canadian Ryder Hesjedal, who had yet to defend his 2012 Giro d’Italia title. After a sextet of fugitives were corralled with 36-km to go, Hesjedal hit the gas over the top of the Côte de Colonster with 18-km remaining. Having drawn some riders, he again accelerated.

Five riders including Martin, Valverde, Scarponi and Rodriguez found his wheel with just under 6-km to go. Martin put in a dig but couldn’t keep clear. Rodriguez’s burst with 1.2-km to go looked very dangerous. Martin thought Valverde would close the gap, but discovered he himself had the legs. The duo had beat on side by side. Enter panda. 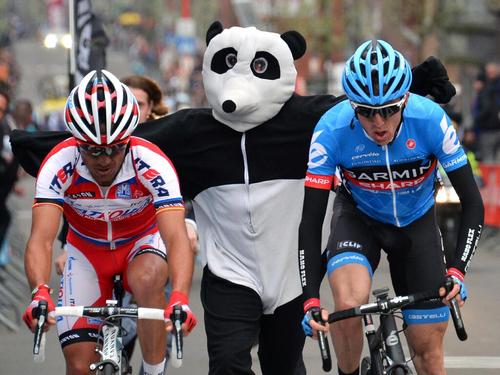 With 400-metres to race and the panda bear flagging, Martin skipped away and took a famous victory. Hesjedal came eighth, his best Liege-Bastogne-Liege result in nine attempts and second best Monument place after sixth in the 2012 Il Lombardia. The legend of the panda was born.

Martin would win Il Lombardia himself the next season.