Cycling isn’t the only outdoor activity to have exploded in popularity this past year. All forms of active transportation (a term that encompasses all human-powered forms of travel) are also having their moment in the spotlight. Along with cycling, active transportation can include walking, rollerblading, non-mechanized wheel chairing, skateboarding, running and, in the winter, snowshoeing or cross-country skiing.

In major cities, shared-use paths, also known as mixed-use paths or multi-use trails, are often designed for many modes of active transportation—walkers, cyclists and kids on scooters should, in theory, all be able to use these paths and trails in harmony. In reality, Canadians across the country are having a stressful time using many of these paths, as they are currently filled to the brim with others trying to get some much-needed fresh air.

“It’s become quite evident to any regular user of the National Capital Commission’s path network that, at peak times, it’s a jungle out there,” Ottawa Citizen columnist Kelly Egan recently wrote. Though Kelly took issue with the city’s multi-use trail overcrowding from the perspective of a pedestrian, his points remain relevant to Canadian cyclists.

Canadians are spending record amounts of time enjoying outdoor activities, and it’s unlikely that these routes will be emptying out any time soon. So what can cities do to deal with overcrowded multi-use paths?

What to do with high volumes of users

The National Association of City Transportation Officials (NACTO) has published a guide on designing high-comfort bicycle facilities for all ages and abilities. It says that on high-speed limited access roadways, natural corridors, or geographic edge conditions with limited conflicts where there is high pedestrian volume, bike paths with separate walkways or protected bicycle lanes should be implemented. In the same context with low pedestrian volume, shared-use paths are OK.

“High pedestrian volumes, driveways, obtrusive bollards, sharp geometry, and crossings all degrade bicycling comfort, but often require long project timelines to eliminate,” says the guide. “Ideally, bicycles should be separated from pedestrians where a significant volume of either mode is present, but where space limitations exist, multi-use paths are still valuable.”

In most cities, it can be a struggle to get bike lanes approved or funding to modify existing multi-use paths. It’s clear that overcrowded paths are better than no paths at all, but what are cities doing to improve the situation on the (often dangerously full) routes?

The City of Toronto’s Cycling & Pedestrian Projects team says that “as opportunity allows within current upgrade or state of good repair programs, the City of Toronto will continue to look to provide more enhanced trail facilities for users.”

Toronto has plans to upgrade trials along higher volume corridors, such as the Waterfront Trail, and, on new paths, to provide twinned (both pedestrian and wheeling/cycling paths) or wider path options. But, despite the need for wider facilities, some trails are restricted in their width by the natural environment in which they lie.

In some ravines and natural areas, such as the Humber River, the multi-use paths are built with one edge on the river bank and the other beside a forested area.

In these areas, additional measures are being implemented, such as signage indicating cyclist should be riding at a maximum of 20km/hr, pavement markings that say ‘Slow’ or ‘Shared Use’ and resting nodes that help denote shared space for pedestrians and cyclists (as well as allow slower users to step off-trail as needed.) 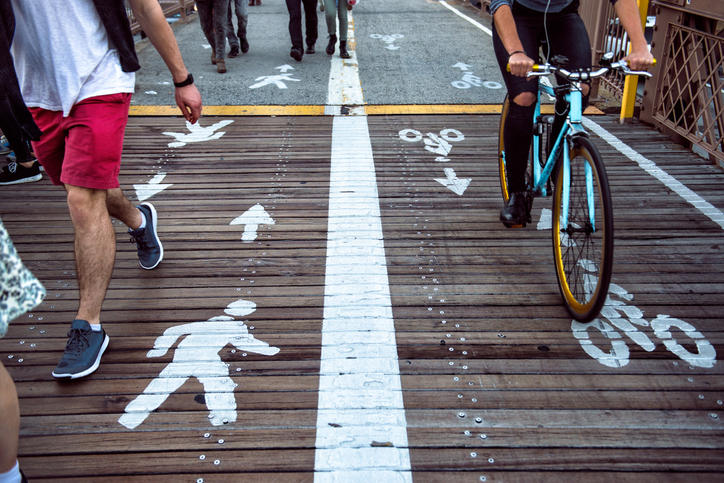 The city will also sometimes provide easy wayfinding and mapping with rules of trail etiquette to help people navigate the system in a shared manner.

These measures are reminders that, though cyclists are vulnerable road users on streets, on multi-use trails they need to be conscientious of their speed and the dangers of high-speed collisions with slower-moving users.

Unlike the pop-up bike lanes and rapid approvals of 2020, it doesn’t seem like most Canadian cities consider the overcrowding of trails an urgent issue.

RELATED: Some Canadian cities are struggling to bring back temporary bike lanes for the summer

In Victoria, BC, there are two main multi-use trails that go from the city’s downtown core to its limits: the Galloping Goose and the Lochside regional trails. The Capital Regional District (CRD) is currently seeking public feedback on a proposed design to widen sections of the trails. The trails see an average of 3.8 million visits per year, and the CRD says the increase in user volumes and conflicts in urban trail sections have been identified as “challenges for years.” If the project is supported, the construction of trail improvements would take place in a phased approach over “a number of years.”

In Ottawa, On., the National Captial Commission (NCC) says that its path network is made up of 280km of existing or planned multi-use pathways, of which eight kilometres have separate paths for cyclists and pedestrians. There are plans to add 11 more kilometres of segregated pathways, but the NCC’s outline has a 10-year horizon, so Ottawa path users shouldn’t expect rapid change.

The solution to stressfully overcrowded multi-use paths is twofold. More path options are needed for users to disperse and new multi-use paths need separated or at least wider designs to accommodate the higher number of pedestrians and cyclists. Realistically, it seems like this will take a long time in most Canadian cities, so, until then, cyclists will have no choice but to learn to live in harmony with other modes of active transportation.