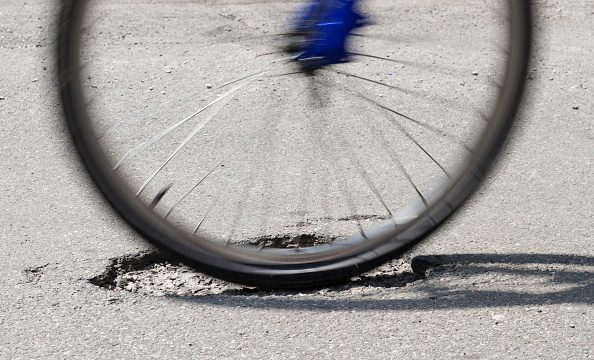 Cyclists riding poorly surfaced, cobbled and pot hole riddled roads could be at risk of permanent nerve damage according to a new study. Researchers at Edinburgh Napier University used a databike fitted with Raspberry Pi sensors and an HD camera to measure the impact of riding over rough bike paths.

The researchers concluded that riding on rough roads for as little as 16 minutes could cause a cyclist to develop Hand Arm Vibration Syndrome (HAVS). Symptoms of HAVS include changes in sensory perception such as permanent numbness of the fingers, muscle weakness and bouts of white finger. HAVS is often associated with working with vibrating tools.

Doctor Mark Taylor, who commutes about 19 km to work by bike, was the head research on the study. Taylor decided to tackle the problem of poorly surfaced bike paths when his seven-year-old daughter fell off her bike after hitting a bump caused by tree roots.

“The minute you get onto a poorly maintained surface you’re getting a substantial duration of vibration exposure that’s being transferred up through your arms and into your shoulders,” Taylor explained to The Scotsman. “Continued exposure to such vibration levels over commuter journeys may lead to discomfort and potentially cause harm.”

Consultant trauma orthopedic hand surgeon at the Royal Infirmary of Edinburgh professor Chris Oliver was involved in the research and said that continued exposure to vibrations transmitted from the road surface through a riders hands, arms and wrist over commuter journeys could cause HAVS. “Continued exposure to vibration over commuter journeys may cause harm,” he explained. “Although some cycle paths and roads are riddled with dangerous potholes, it’s continual vibration over time that’s more significant.”

While the initial research did not cover bike selection, the bike and how it’s set up could have a significant impact on the severity of the vibrations reaching a riders body. Dave du Feu, a cycling campaigner, said bikes with small or narrow wheels such as Brompton folding bikes could be especially prone to damaging vibrations.

A Glascow city council spokeswomen said that in light of the findings, the city plans to incorporate the data in their assessment of bicycle lanes in the future. More data on the quality of cycle paths can help municipalities prioritize investments to improve the conditions of existing paths.

The spokesperson added an important point, “Certain factors within the cyclist’s control such as type of bike being used, tyre width and pressure, even wearing cycling gloves have an effect on how much vibration is transmitted to the rider.”