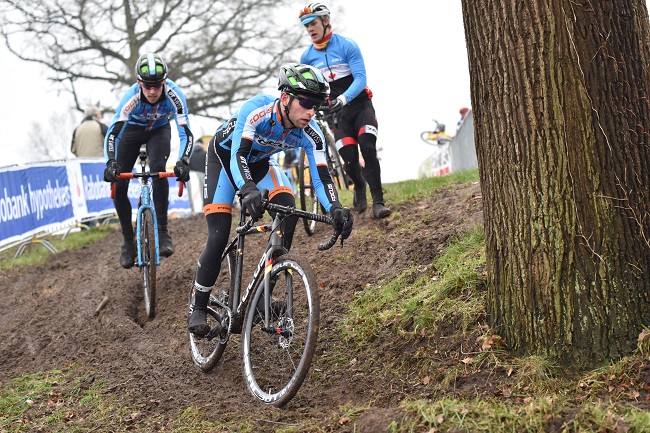 The 2016 cyclocross world championships in Heusden-Zolder, Belgium will likely be the last such competition for Aaron Schooler, an athlete who has forged a solid, sterling reputation in the discipline. But that’s not to say he expects to go out with anything but a bang.

In Schooler’s veteran words, though, that has as much to do with how he expects to experience this year’s world championships as it does with what he hopes to achieve.

“Belgian races are definitely one of a kind,” he said, looking ahead to the terrain—and the tempo of competition—in Zolder that will confront other Elite riders as the men’s race rolls out on Sunday. Echoing the appraisal of cyclists such as Cameron Jette and Mical Dyck, there’s a pronounced difference, he emphasized, between what the muddy, technical courses of Belgium can throw a Canadian rider’s way and what those competitors may experience at home. “[Belgian courses] typically have lots of mud, lots of rutted sections, tonnes of sand, and a lot of the time you feel like you’re going race pace just to make it around the course for one lap,” Schooler described.

“Zolder is no different.”

Slick, muddy downhill sections, even when the prevailing conditions have been dry for a while, are part of it, he said. Tough uphill stretches are broken up by pavement and flat runs, interrupting the flow just enough to make things interesting. It all underscores what separates a Belgian field, at least for the most part, from the overseas visitors who come to contest the world title: experience.

“The Belgians have these known and famous training grounds which have sand, mud, hills, and a free track to ride at whatever pace you want to, and the trails at these locations are almost identical to what you would find in the big Euro CX races,” he said. Immersion, he suggests, is the best form of preparation.

And though Schooler has had his share of high points on the terrain of Belgium—cracking the top 40 out of a world-class field at the Zolder World Cup over Christmas certainly counts—he doesn’t stop thinking about all the minute details, he said, that can make or break a competing cyclist’s performance. “If I don’t constantly think about all the little things,” he told Canadian Cycling Magazine, “that last ten percent which makes great bike racers, then you can sometimes fall into old habits.” Looking back at the 2015-16 season, there are a few finishes that the Edmonton-bred ‘cross expert says could have been better achieved—the Nommay, France cyclocross World Cup being one of them, his injury notwithstanding. 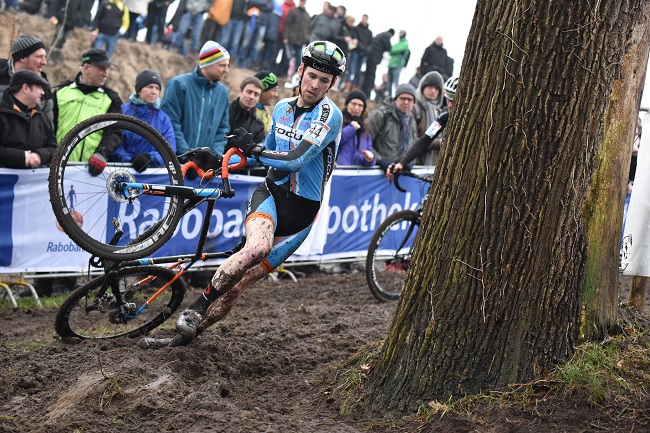 So what are his hopes for the season-topper in Zolder on Jan. 31?

“If I can make the top 40 again, I’ll be stoked,” Schooler said. Considering the field that awaits him at the start, he’s all too aware that if this is his last hurrah at a European cyclocross race, it’s going to be a challenging one—fittingly so. “I know there are world champs out there,” he said.

After Zolder, Schooler’s focus going forward, he told us, is fixed on what’s closer to home. “After Sunday’s race, the life priorities for me will be shifting,” he told Canadian Cycling Magazine. “Up until now, I’ve taken a lot of time away from regular people things to focus on the bike and my racing, and I’ve made many sacrifices to do that, and so has my wife and my family. On Sunday, the priorities will be switching to worl and family, then the bike will come next. It’s an interesting concept, but given that I’ve never been a professional bike racer, I can’t say I’m retiring, or even quitting I’m just shifting the focus to other, more important things in my life aside from my personal ambitions in the sport.

“I’ll still be competing, and involved in the sport of CX,” he assured his fans. “It’s my passion. Cutting cold turkey was never my thing!”

Still, facing such a bookend in his career, even if it’s for only one phase of it, has given the Canuck ‘cross athlete a certain perspective, one that extends to the future of the discipline in Canada beyond 2016. The years he’s spent competing at the level he has, Schooler says, have afforded him a bird’s-eye view of how much ‘cross has evolved in Canada. It also, he suggests, leaves him optimistic about where it’s going.

“With all the work the cyclocross working group has been doing, and with all the major help of all involved, especially Scott Kelly,” Schooler said, “this Worlds project would be altogether a different beast. It’s incredible how much has changed in the nine years since my first Worlds project.”

“A lot of thanks goes out to the cyclocross community,” he said.