On Monday, Canadian Sunweb cyclists Alison Jackson and Leah Kirchmann held a live Q&A on the Cycling Canada Instagram account. The stream was fun, informative and full of little nuggets of wisdom. Here are a few things we learned from tuning in.

In the Netherlands, where Alison Jackson and Leah Kirchmann are currently located, there are little signs with numbers all throughout cycling routes that are super useful for planning your ride.

“Sometimes bike routes go straight through a cow field, but that’s what makes it fun” said Kirchmann with a laugh.

Everyone has their own apartments, the riders aren’t going out in groups and many have returned home to Europe. While making an effort to not take any risks on rides, Kirchmann and Jackson have chosen to stay and avoid travel for the moment.

“In our way of showing love to our families in Canada, we’re gonna wait here,” says Jackson.

3. Alison Jackson is all about the van life

During the off season, Jackson, a self-described minimalist, loves travelling around in a van with her husband. “He loves travel and adventure and I love bike riding and adventure,” says Jackson. Although they’re apart for long periods of time while she’s racing, “With van life we get to spend every moment together.”

4. Both cyclists support Canada’s decision to pull out of the Olympics

“For the athletes it’s hugely disappointing,” said Krichmann. “It is a huge goal for so many people, but we’re facing a big challenge right now. The whole world is facing a challenge and it’s not responsible to hold the Olympics this year. It poses a huge risk to athletes and to public health.”

RELATED: Olympic and Paralympic hopefuls react to Canada pulling out of the 2020 Games

Jackson was in agreement, “The whole premise of the Olympics is equality, but right now some athletes aren’t able to train at all,” she said, referencing those under quarantine or athletes such as synchronized swimmers, who can’t even access public pools.

In reference to riding safely, Jackson joked “It’s probably safer for me to ride bikes outside than making TicTok videos inside.” The cyclist has almost 1,400 followers on the platform.

6. The cyclists are transitioning to maintenance training

With the cancellation of races in the foreseeable future, Kirchmann says the Sunweb riders have transitioned to more of a maintenance training plan.

“Similar to base training in the winter, with longer, easier, hours and only a little bit of intensity,” she says. The athletes are also doing some weight training in the gym.

Swiss ball knee tuck for day 5 of #HealthyHabitswithPoido, harder to do for 1 minute than I anticipated! Take a break from twitter to do some core!🤸‍♀️@teamsunweb pic.twitter.com/tKUFaiUk06

7. Kirchmann is (maybe) always the most bundled up on group rides

“Even though she comes from the coldest place in Canada (Winnepeg), Leah’s always the one wearing the most clothes on the ride!” claimed Jackson.

8. A women’s Tour de France isn’t a necessity for women’s cycling to succeed

When asked whether she would race a women’s Tour de France, Krichmann had a well thought out answer. “I think women’s cycling doesn’t need a Tour de France to be successful,” she said. “We have a lot of cool and innovative events already.”

“If it did happen, I would want it to be a proper stage race, not just a one day event.”

Jackson’s ‘Canada’ fanny pack was eventually revealed to contain hand sanitizer and a packet of origami paper. She let viewers choose the colour (green) and she folded an origami bison as the live stream went on. She chose the animal because she comes from a bison farm in Alberta. 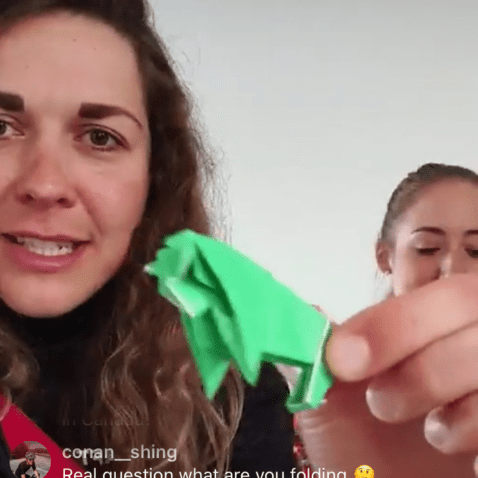 The 29-year-old baked a mini banana bread to share with Jackson. She says banana bread is one of her favorite foods while riding. 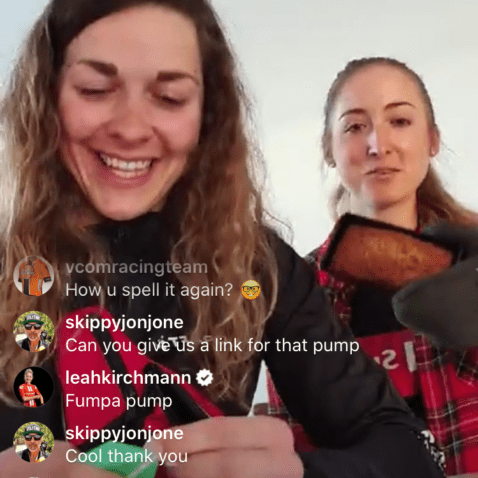 Discussing on and off-season nutrition, the pair agreed that everything in moderation is the key, and treats are never off the table as long as you don’t indulge too much. “Think of nutrition as fuel for the work that you’re doing,” says Kirchmann.

11. Both women are big supporters of Fast and Female

The program was created to give girls the role models and skills they need to succeed in sports and life. Fast and Female started in Canada and now holds international events, connecting local elite athletes with young women in their communities.