Enjoying a nice day on the road with others is one of the best parts of cycling. If you’re just getting started, plan on doing a charity event or even if you’ve been cycling for a while, but haven’t ridden in a group before, there are a few things you should know to be fully prepared for your first group ride.

When you’re cycling alone, it’s not really a big deal to swerve around a pothole, some unexpected garbage or a bump in the road. But with others in front of and behind you, small features in the road become much harder to see and to react appropriately to. Point out anything you wouldn’t want to ride over so that those behind you can be prepared to ride around it.

There are a number of hand signals you should know before cycling in a group. Most of them are intuitive, but it’s important to understand how to clearly communicate with other riders. When in doubt, yelling “hole!” or “stopping!” in conjunction with a hand gesture will really drive the point home.

RELATED: Hand signals all cyclists should know before joining a group ride

In a group, you’ll be riding in close vicinity to others, so it’s important that you aren’t behaving erratically or braking unexpectedly. Before you join a group ride, practice pedalling consistently—try “soft pedalling” instead of coasting to reduce fore/aft yo-yo-ing.

When you’re starting up again after stopping at a light (particularly at the front of the group) build up the pace gradually instead of surging ahead as riders behind are still clipping in.

Drafting is the most important skill that riders need to understand before joining a group ride. When you ride directly behind another cyclist, the wind resistance is reduced and the amount of energy that is required to pedal goes down significantly. The more riders that are in front of you, the greater effect of the draft. It’s a great way to save energy and ride more efficiently.

To take full advantage of the draft you get when riding in a group, you’ll need to ride as close to the rear wheel in front of you as possible. This takes practice, and until you get more experience it can be a bit mentally taxing. It’s important to keep your eyes on the road while also maintaining a consistent distance from the rider in front of you, so try looking at their shoulders instead of staring at their rear wheel.

In a bigger, well-organized group, riders will take turns “pulling” at the front of the pack. This position requires a bit more work because there is no one for you to draft on and you’ve become the frontline in the battle against the wind.

When you get close to the front pay attention to the pace that those currently leading are setting. When it’s your turn to pull the group, try and match that approximate speed if you can. In most situations, pulling up to the front of the group and immediately dialling up the pace is not a well-respected move, though a gradual speed increase is ok in some contexts.

When you’re leading the group and you see a stoplight that’s about to change, consider how many riders are behind you and whether they’ll be able to make it through before it turns red. 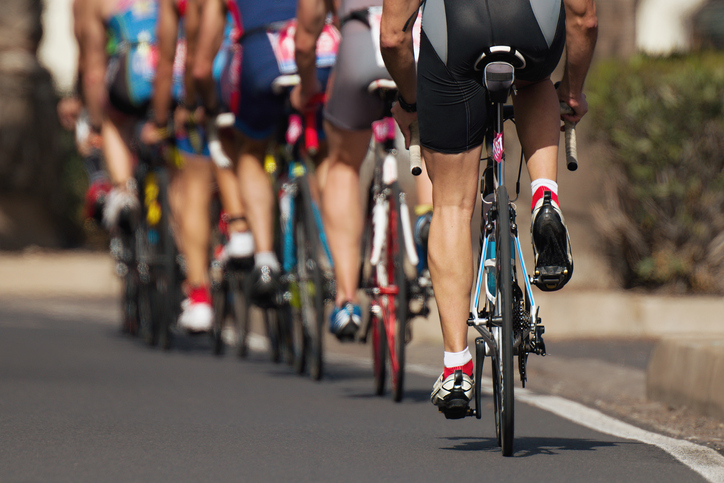 If you get to the front of the group and you can’t match the speed of the person beside you or hold the pace that was being set before, flick your elbow and pull off to the back of the pack. There’s nothing wrong with doing this—as long as you do it smoothly, nobody will care that you didn’t spend a long time pulling.

This all might sound like a lot, but soon enough it will all be second nature. Go for a few rides with these tips in mind and, if you can, practice drafting with a friend before you join in with a group.

Make sure the ride you’re planning on attending is beginner-friendly and don’t be shy to tell others that it’s your first group ride. Cyclists love to give advice, and you’ll likely receive some helpful tips and tricks from everyone around you.