Tom Dumoulin is making headlines again this week, but it is not for his riding. Instead, the Tokyo Olympic silver medallist ran a surprisingly fast 10k.

The Jumbo Visma rider’s fleet-footed exploit, and a few other recent turbo trots from cyclists, has us thinking of the most impressive, or infamous times pro cyclists made the news on two feet, not two wheels.

Tom Dumoulin’s return to pro cycling this fall was sensational. But going fast on bikes isn’t the only trick the Dutch rider has up his sleeves. Jumbo Visma’s time trial world champion posted a 32:38 at the Maastricht 10km in November.

If Dumoulin’s 10km run is impressively fast, Tom Pidcock’s 5km run at the start was unbelievably quick. His posted time, 13:25, borders on pro-level speed. But fans were quick to call out the time as a little too good to be true. Even Canadian runner-turned-roadie Mike Woods chimed in saying it didn’t look 100-per-cent above board (though, in true Canadian fashion, added that anywhere sub-15 would still be very impressive for Pidcock).

Ineos’ gold-medal-winning mountain biker isn’t backing down. While he’s willing to admit there may have been a GPS error, he’s also intent on proving he can actually run sub-15. Nike’s joining the party, too. With cyclocross worlds headed stateside, the powerhouse running brand has invited Pidcock to its Oregon home track to put down an official time.

This is by far the most impressive running feat on the list.  A sub-four-minute-mile remains an important standard for elite runners around the world. Woods achieved it while still training and racing full time on two feet. It’s only third on our list because it happened before the Canadian switched to cycling. Woods now holds the unique distinction of being the only rider to run a four-minute mile and race the Tour de France.

Here in North America, Legion’s Freddy Ovett posted a post-season L.A. Marathon time of 2:48:55. Going under three hours for the marathon is always going to be impressive. Under 2:50 even more so. Still, Ovett’s time was only good enough for 44th in L.A.

Ovett isn’t the only cyclist taking on the marathon distance. Adam Yates ran a very respectable sub-3hr marathon in Barcelona. That’s fast, if not pre-runner level fast. But Yates won’t be trading in cleats for trainers full time, joking “I think I’ll stick to riding” on his post sharing the run. 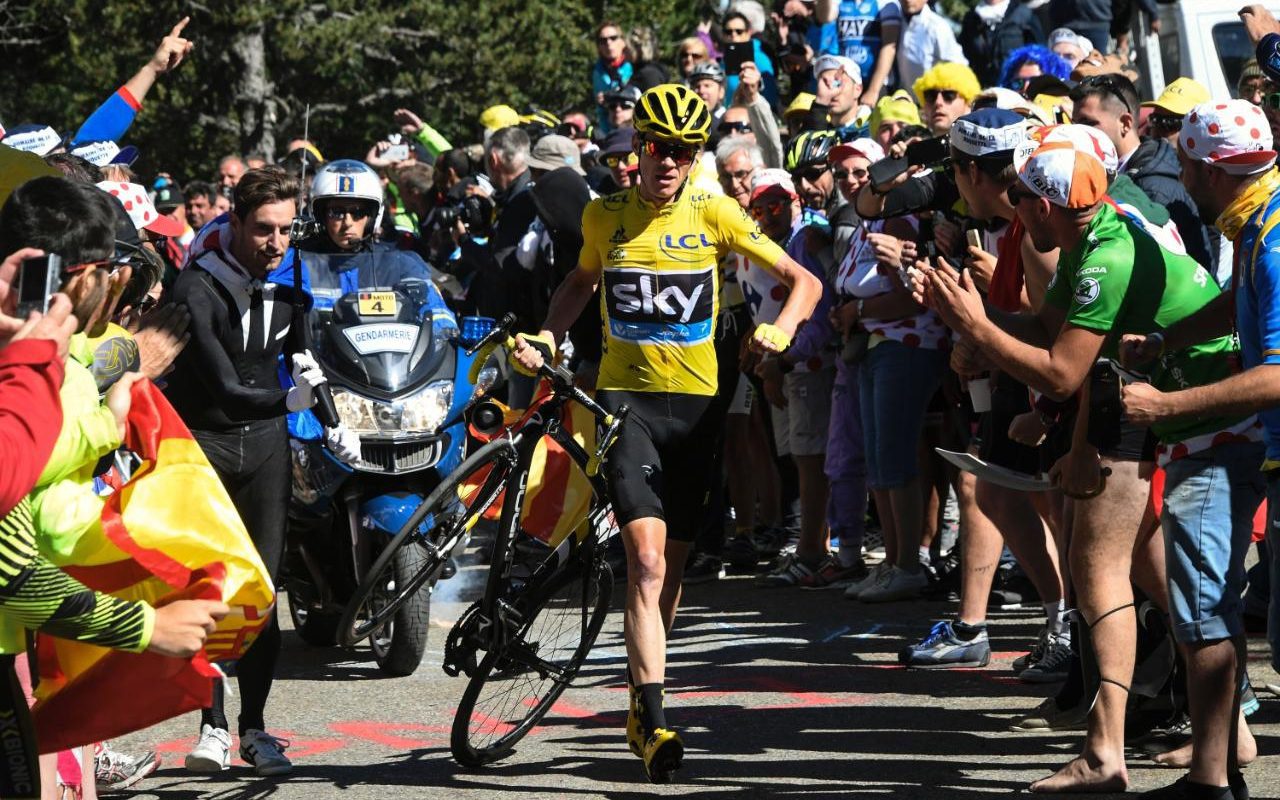 Chris Froom was leading the Tour de France when, on Stage 16, he collided with a motorcycle while climbing the slopes of Mont Ventoux. A wild crowd made it impossible for any team car to get to Froome fast enough, forcing the Brit to take off up the mountain on foot.

This is by far the most memorable run on the list, if only for how chaotic it was, but Froome loses points for distance and speed. We don’t know his exact pace for sure. But, considering he was wearing road cleats and running up Mont Ventoux, we’re confident in saying it was a fair ways off Dumoulin’s 3:15/km pace during his 10km effort.

Yes, running is a regular part of cyclocross. But usually, it doesn’t mark a pivotal moment in a race. When it does, it is rarely in such dramatic fashion as in Gieten in 2016. Wout van Aert and Mathieu van der Poel duo were the height of their cyclocross rivalry at the time. Van Aert led much of the race, but with van der Poel shadowing him closely the entire time.

Neither rider was having much difficulty with the final sand hill before the finish, until the penultimate lap. Van Aert bobbled, letting van der Poel open a gap. The Belgian chased back and, with a strategic sprint, took the lead into the sand on the final lap. Notoriously skilled on sandy courses, van der Poel went for a late inside pass on the final sandy corner. The move forced van Aert, and then van der Poel off their bikes. This resulted in a thrilling full-gas foot race up the deep sand hill towards the finish line. The pair remounted shoulder-to-shoulder, ready to sprint for the line. Van Aert had dropped a chain, and, with Laurens Sweek lurking a handful of seconds back, had to rush to fix his bike while van der Poel rode away to victory. The late-race drama is the most exciting foot race between two cyclists in memory, especially in the midst of a bike race.

Wout van Aert is well known for mixing running in with his training. In October, he took that to the races. The Jumbo Visma rider joined some teammates at the Antwerp 10 Mile, posting a quick 1:11:11. Not on pace with Yates or Ovett, but not bad considering it was during his official off-season. It’s still a 4:24/km pace for an hour, and happened a week after he was riding Paris-Roubaix.

Dumoulin makes the list again, sort of. The Dutch rider had a case of the other kind of runs during the 2017 Giro d’Italia. It was so severe he had to stop at a crucial point on Giro’s Queen Stage to get relief roadside, despite it putting his position in the overall in jeopardy. Dumoulin proved his fortitude, if not intestinal fortitude, pulling up his britches and finishing the stage. While he lost time on the day, he would go on to win the Giro overall that year.