The 2020 classics season began on the last weekend of February with Belgium’s opening weekend. Riders took on Omloop Het Nieuwsblad and Kuurne-Bruxelles-Kuurne. Both the men’s and women’s Omloop Het Nieuwsblad produced some exciting results, among these fields a number of Canadian pros took the start line. Guillaume Boivin and Sara Poidevin have worked out exactly how to eat to keep powering through these relentless one day races.

Elsewhere, Canadians Alec Cowan and Ben Perry are competing in stage races. They have to balance race day nutrition with proper recovery food to fuel them during consecutive days of racing.

These four Canadians all have slightly different nutrition plans. They break down their race-day food, the best post-ride dessert, finding food staples in Asia and when to have a beer post-ride.

Quebec native Guillaume Boivin, who currently races for World Tour level team Israel Start-Up Nation, kicked off his classics campaign in Belgium. For Boivin, the weekend of racing would net over 400 kilometres in two days. These opening classics races often provide insight into how pro cyclists are shaping up for the bigger tests in the coming weeks and months. With dozens of punchy climbs and challenging cobbled sectors, the outcome of the race often comes down to one thing: who has the most left in the tank.

So what are you eating before the race?

GB: Pre race it is pretty standard. I look for things that are easy to digest, things like rice or pasta, paired with chicken and cooked vegetables. I like to be in an energy balance for a couple of days before the race so it doesn’t feel like I am going to explode trying to top up my system stores before the race. You want to get to the race with a good feeling and with glycogen stores full. With the years of experience I have racing these longer races, I can kind of go on feeling as far as quantities go. For breakfast I’ll have overnight oats most of the time. Our team carers are legends and they prepare it for us the night before! In a one day classic, it’s not rare that we end up racing pretty hard from the gun to the finish line. 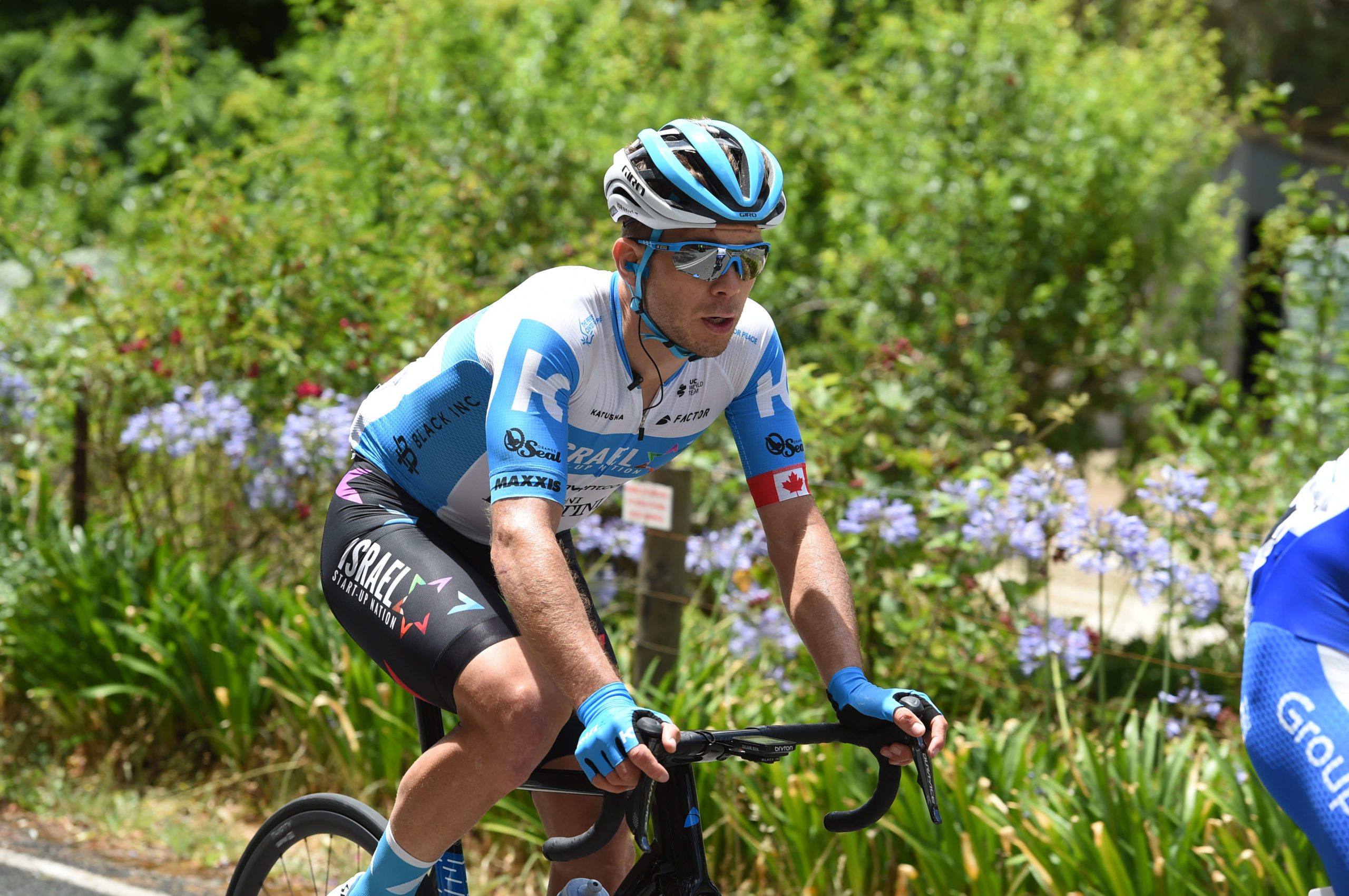 So how about once the race starts, what does on the bike nutrition look like?

GB: My main goal is to get about 80-90 grams of carbs in an hour, the new Super Carb drink from OTE makes it pretty easy to hit this threshold as the drink mix provides 80 grams of carbs per bottle. I will head to the start line with two of these bottles and my pockets full with gels and one or two bars as emergency food.

And what about after the race, what does a typical refuelling protocol look like?

GB: Directly after the race, we will have a recovery shake once back on the team bus. Our bus driver prepares us a meal to eat as we transfer back to the hotel. This meal is pretty standard consisting of pasta, rice or potatoes paired with a protein source. Even if it’s not a stage race the classics one day races are usually pretty close together so we want to recover as fast as possible, not to mention how hungry we are after these long days on the bike! 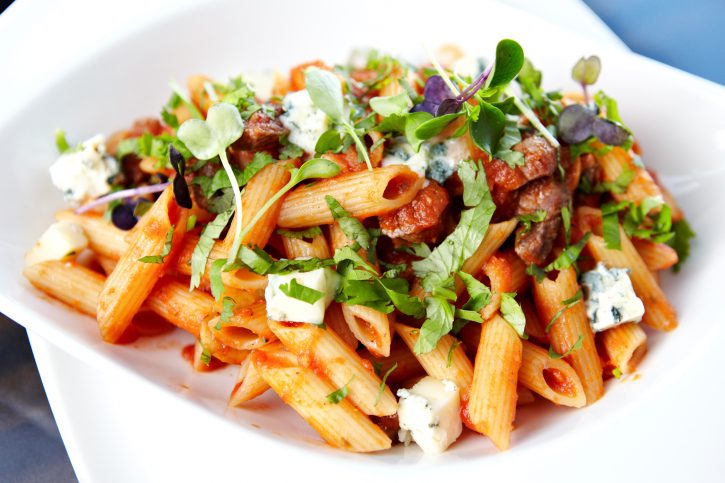 How about a beer? Belgium is not only known for its Flemish Classics…

GB: Depends on the day! Sometime we’ll all have a beer all together. To celebrate or forget the day, the mind knows when it’s a day to get a beer!

Sara Poidevin who races for the UCI Rally Cycling Women’s team, had a strong performance at the women’s Omloop Het Nieuwsblad, placing thirtieth. 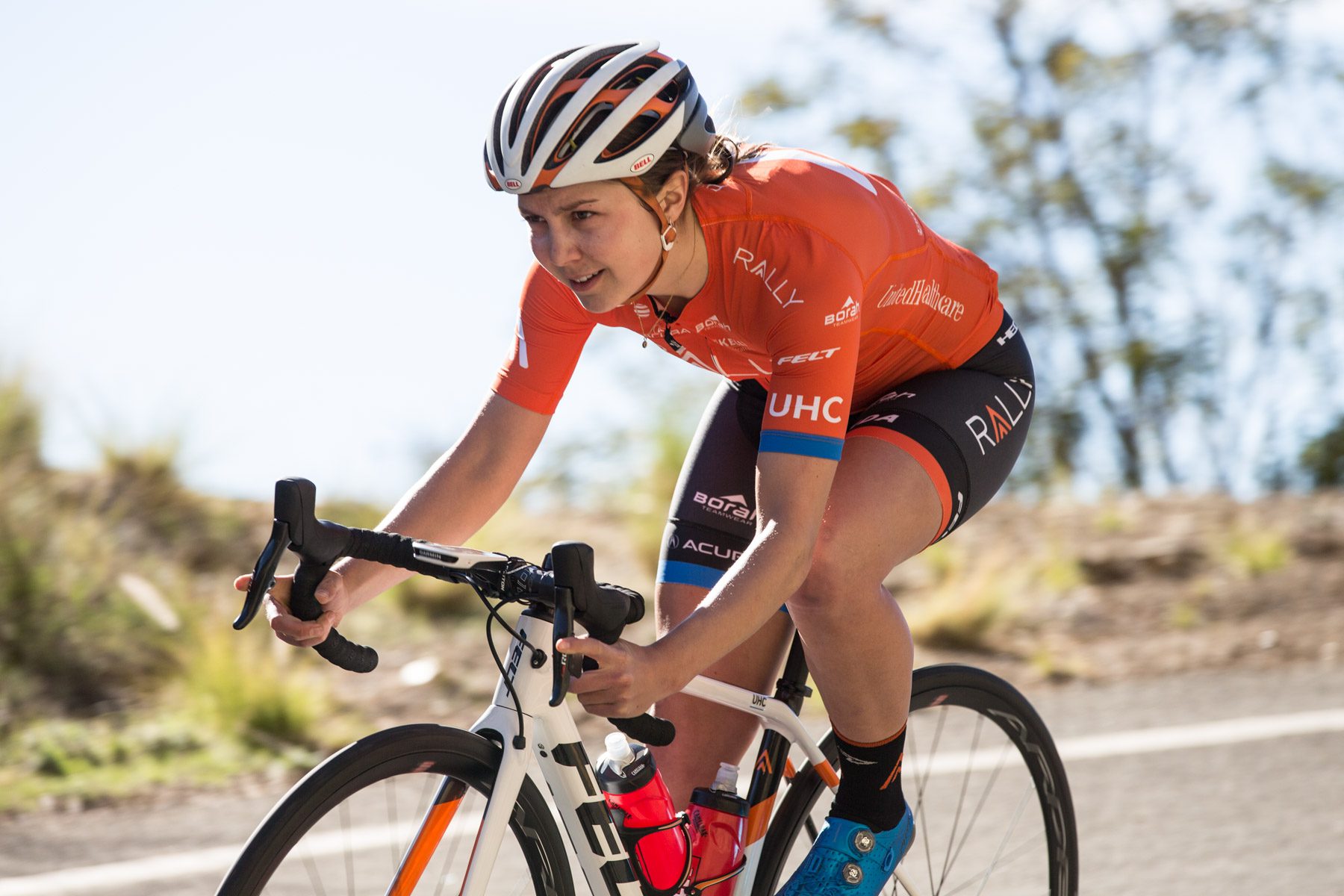 Her go to meal? a wholesome and healthy combination of foods. Poidevin’s pre-race meal is often oats or rice with banana, milk, buckwheat groats, cinnamon and salt. In one meal she covers some of the essentials with a healthy serving of carbs, fruit and some protein for the long day ahead. Her pre-race food doesn’t stop there. Once she’s at the race (or on route) she will look to fill the tank back up with some banana and rice cakes.

RELATED: Tips from pro cyclists on beating jet lag and getting on the bike

During the race, her team fuels riders with nutrition from Clif. The company provides them with electrolyte drink mix, gels and bars to keep the athletes topped up on their way to the finish line. After her three and a half hour race, she looks for lots of veg and some much needed carbs and protein to begin the recovery process. Poidevin cites this need for a balanced and healthy meal post-race to combat what can often be a mountain of sweet and sugary side on-the-bike food. That being said, she still has an appetite for some dessert from time to time. Her favourite dessert is chocolate and she’s a fan of a good chocolate chip cookie.

Canadian Ben Perry is currently riding for the Israeli Start Up Nation’s continental development squad but has been called up to the pro team on a few occasions already this season. A unique new rule put in place by the UCI now gives teams with a development team the ability to call up riders and put them in the WorldTour lineups . Perry, who recently raced at the Tour of Antalya, a UCI 2.1 stage race, breaks down his race day nutrition. 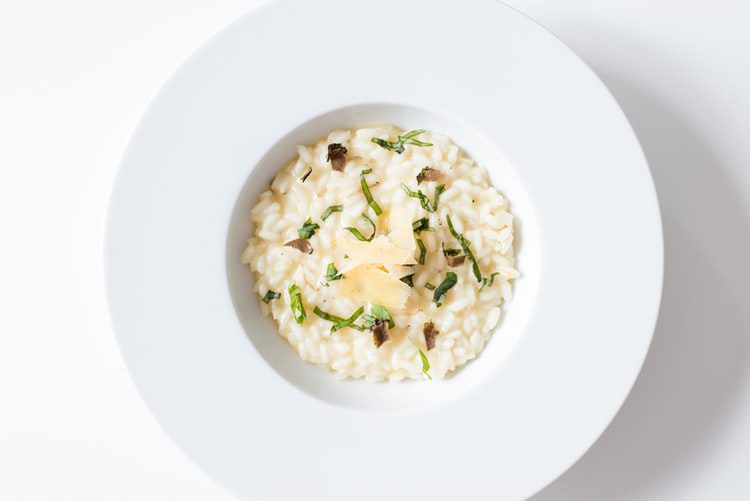 He prefers a pretty simple little meal, consisting of white rice, honey, salt, olive oil and cheese. Perhaps this jet fuel of choice is what lead him to a strong twelfth place finish on stage two of the race, and what kept him firing on all cylinders as he fulfilled his domestique duties which earned a stage win for his team on the stage one.

He says his fuel of choice consists of muesli with almond milk, dried dates with coconut, sourdough bread, chicken pesto pasta and of course coffee. When racing in Asia there were a few minor adjustments he needed to make to his nutrition, however he was able to find his staple meals in the form of cereals, fruit, croissants, bread and cheese. 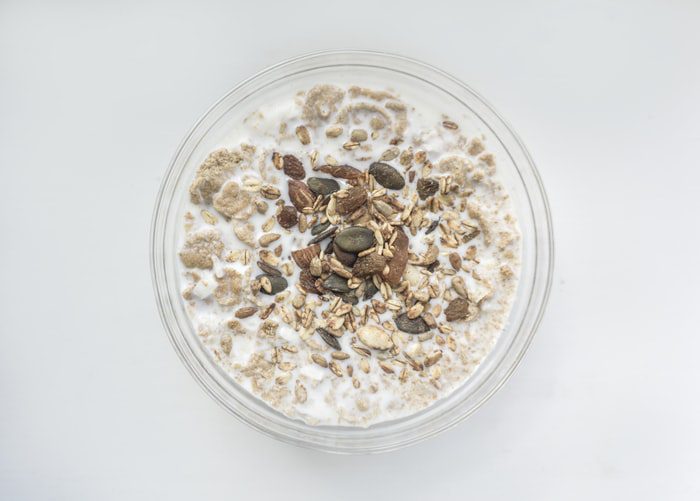 What should you be eating

As the outdoor season kicks off for us “casual” riders, what can we take away from the nutrition of the pros?

It’s all about knowing how much fuel we need for our ride. It’s important to know just how much is needed to top the system back up post ride to aid in recovery, allowing riders to be back on the bike the following day. For any training or racing over the two hour mark it is important to not only fuel before the effort but to top fuel levels up during the ride. Fuel on the bike can come in the form of drink mix, gels, bars or even bananas and dried fruit. 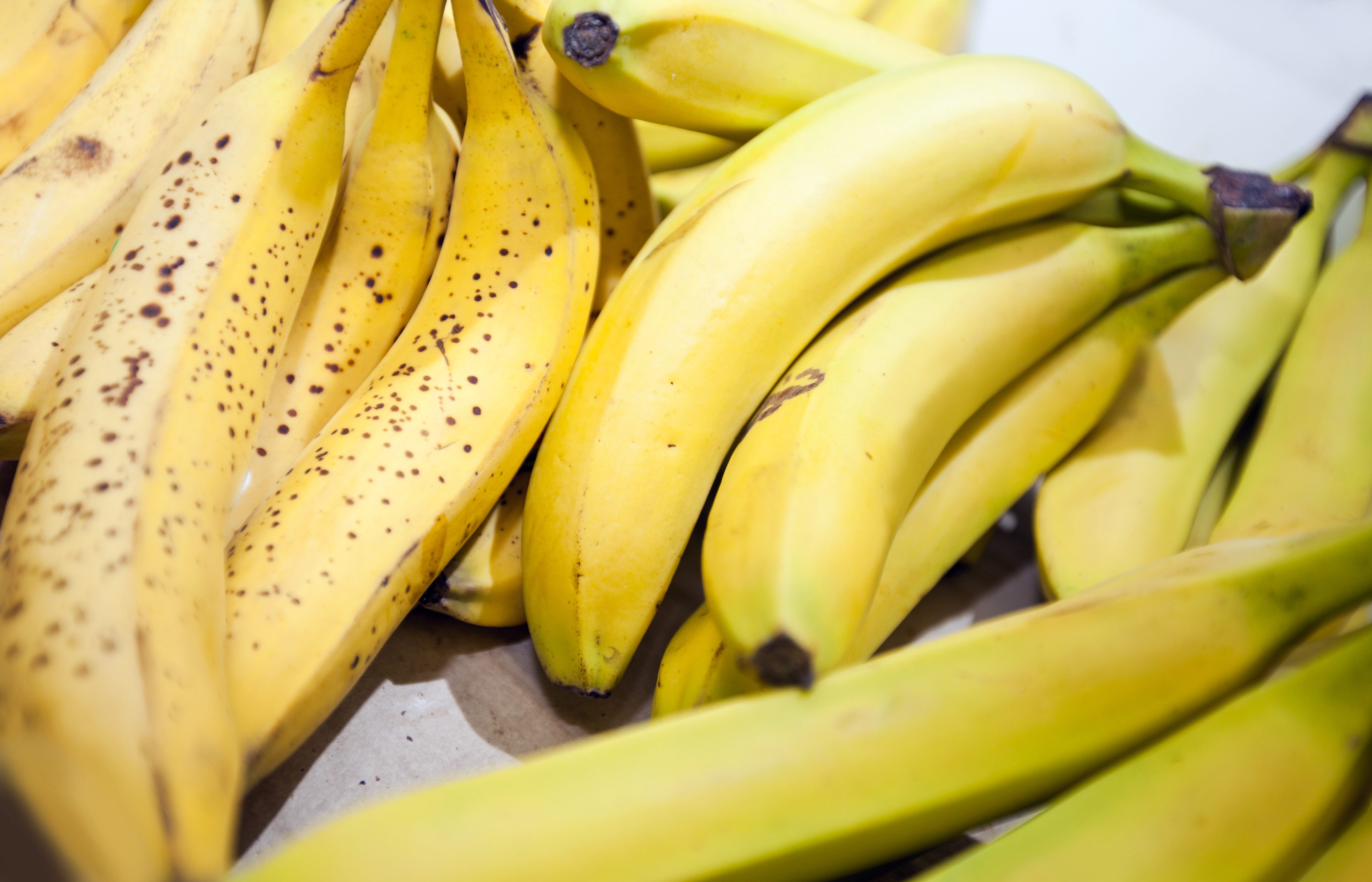 For intense efforts Boivin’s 80 grams of carbs an hour is an accurate baseline to go off of, keeping in mind each individual has different nutritional needs during activity. Another thing to keep in mind is the importance of finding things that work for you as an individual. One nutrition strategy might be great for one athlete but could hinder another’s performance. The best way to find what works best for you is trial and error. Try something new and see how you feel not only during the effort but afterwards. Your body will certainly tell you if something does not work in the form of GI upset or a sluggish feeling. Finding a nutrition program for oneself can be a daunting task but it is essential for performance and training sustainability.