The Wild Atlantic Way is in the bag!! We got ‘er done!

“Yep, it came down in biblical proportions at times!” 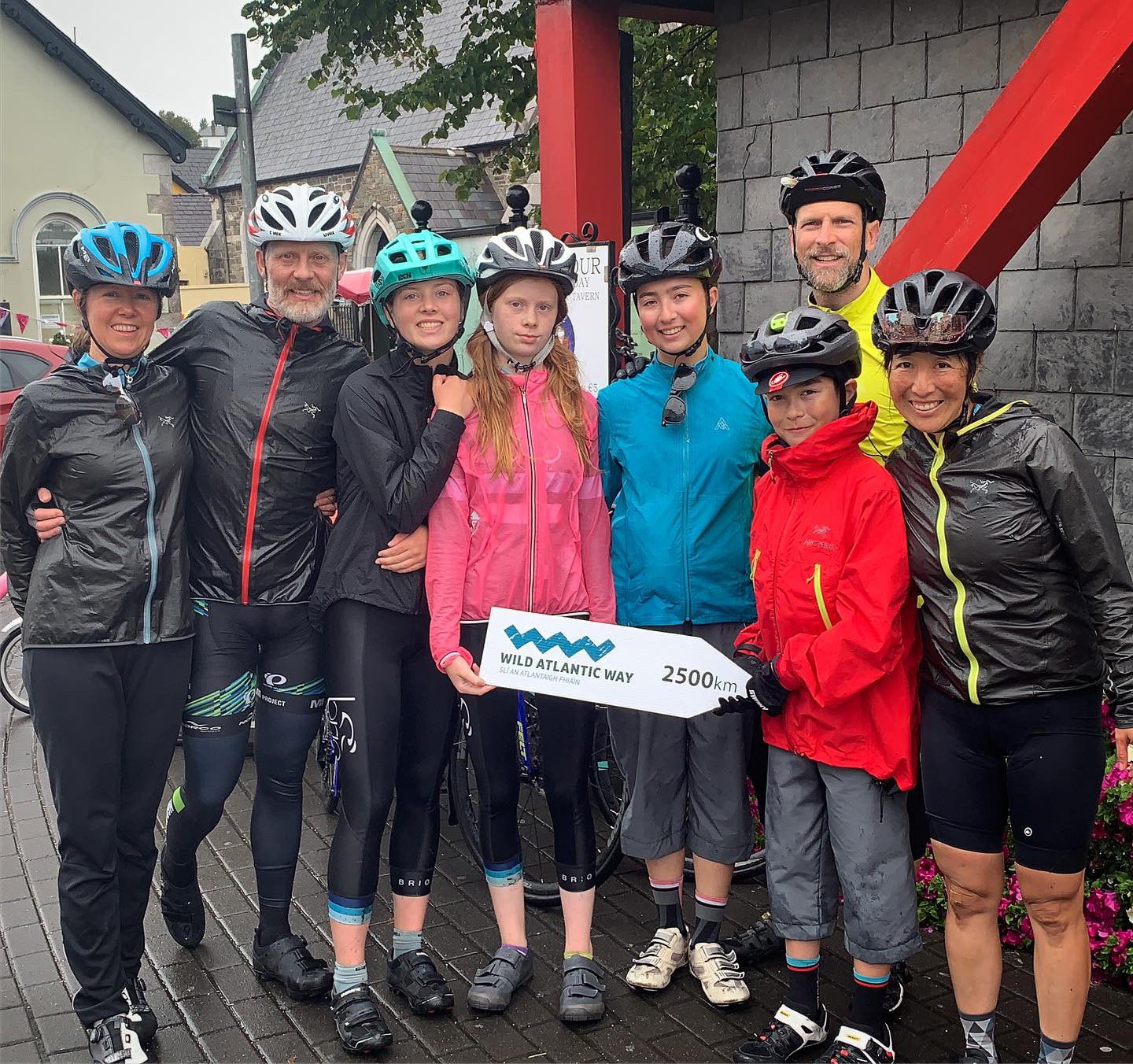 “Was it hard?” you may continue.

“Of course it was. Hardest thing we’ve done on a bike in a donkey’s age! And we did it with kids!”

“Best darn bike trip we could have done! We struggled, we laughed, we saw Ireland like few ever do. And our kids discovered that with a little perseverance and effort, marvelous things are on the offer.”

Here’s the thing, cycle touring Ireland’s Wild Atlantic Way is not a leisurely spin but an arduous physical challenge through a wild and unpredictable environment. You’ll see the best, and occasionally the worst, that Ireland has to offer. Riding it will test you, push you and force you to see and experience things a little differently than you’d planned. It will dish out heaping loads of ‘type 2’ fun that, at times, will have you questioning why you chose to come in the first place but in the end, you’ll come away gobsmacked. Ireland is enchanting.

They’ll be times when you’re focused on getting somewhere only to have a herd of cows emerge onto the road, stare at you with empty indifference, and saunter along in front of you for as long as they bloody well want. You’ll discover that tomorrow’s forecast is never correct but always includes wind, rain, clouds and sun in some combination. You’ll notice hills are always steeper than they say, that mileage markers are simply a finger-in-the-wind and that the road surface, at times, will shred a truck tire.

But there will be moments when the rain stops and the sun peaks out to reveal a landscape so green that the word takes on a completely new meaning. You’ll find yourself skirting a coastline that ends so sharply it feels like your riding on the roof edge of a building with its stone faced facade plunging hundreds of feet down to the broiling ocean below. And you’ll meet a nation of people who simply want to receive you, find out “how are ye?” and pass the time through lazy chat.

While riding on a quiet rural road on the Sheep’s Head Peninsula of County Cork I noticed a small sign pointing to an air memorial. We were in the middle of the countryside, with nothing around, and the sign felt conspicuously out of place so I stopped. A low height stone wall defined a modest parking area that was barely big enough for our bikes. There was no one around. We didn’t know where to go at first until we discovered a tiny wooden gate opening to a path leading to the ocean edge. At its end sat a carved sundial and a semi-circular wall facing out to Mizen Head – Ireland’s most southwesterly point – and the waters of Bantry Bay. On the semi-circular wall are names, lots of them, 329 in fact. This is the memorial to the largest mass murder in Canadian history. On the 23rd of June 1985 Air India Flight 182 was blown out of the sky just south of here. On board that flight was my high school physics teacher Dr Nishith Mukerji and on the wall of names I see his name etched. I was just a couple years older than Caitlin and Mika when he was killed. As a Canadian and as someone who knew a person on that plane, I’ve always felt very connected to it. Now, having discovered this beautiful tribute on this tranquil shore, I feel ever more so. Our kids now feel that way too. 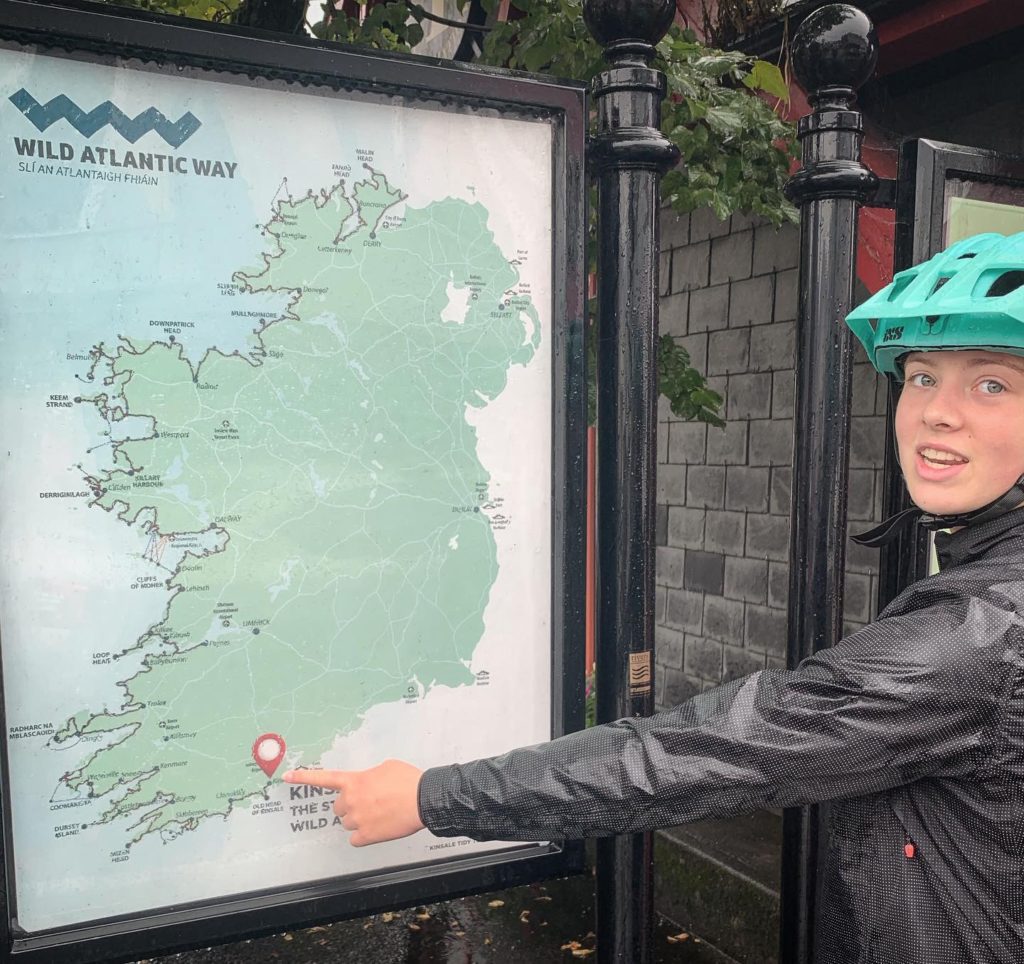 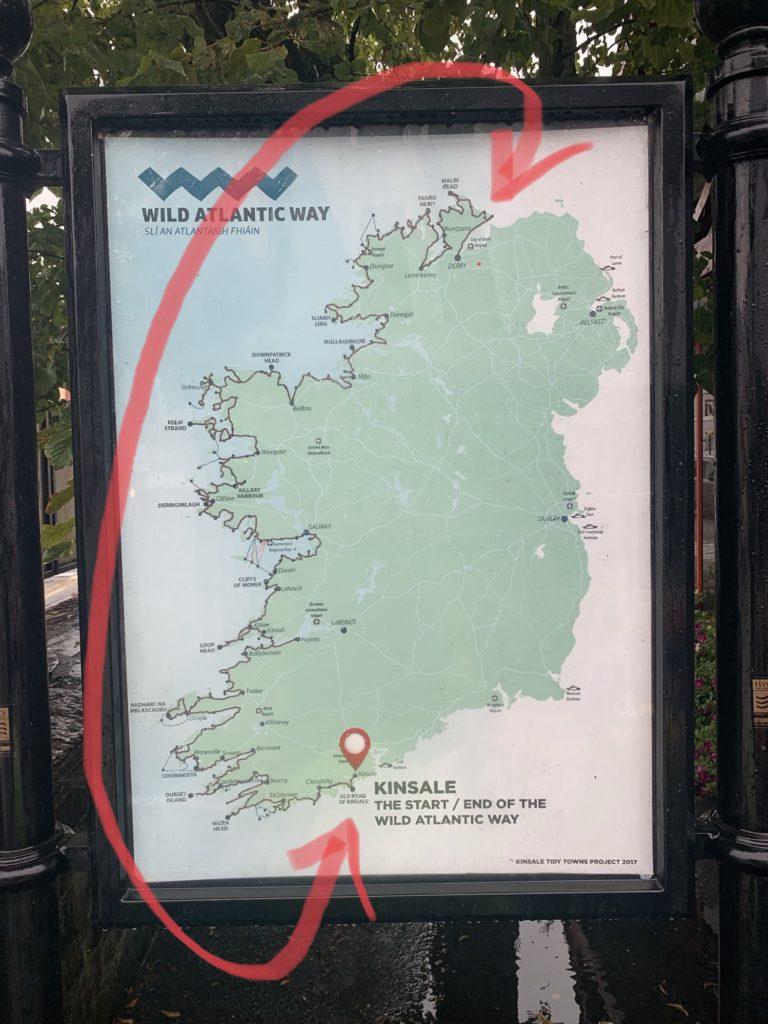 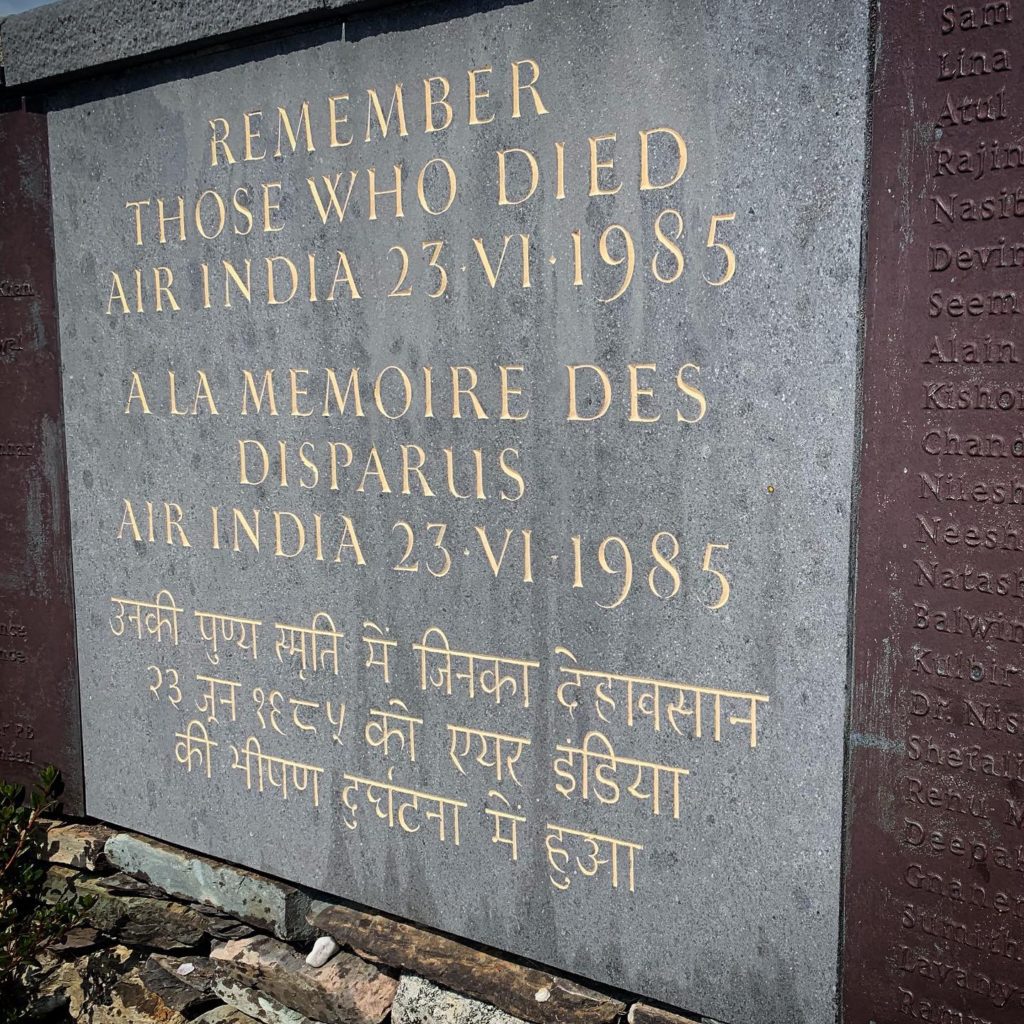 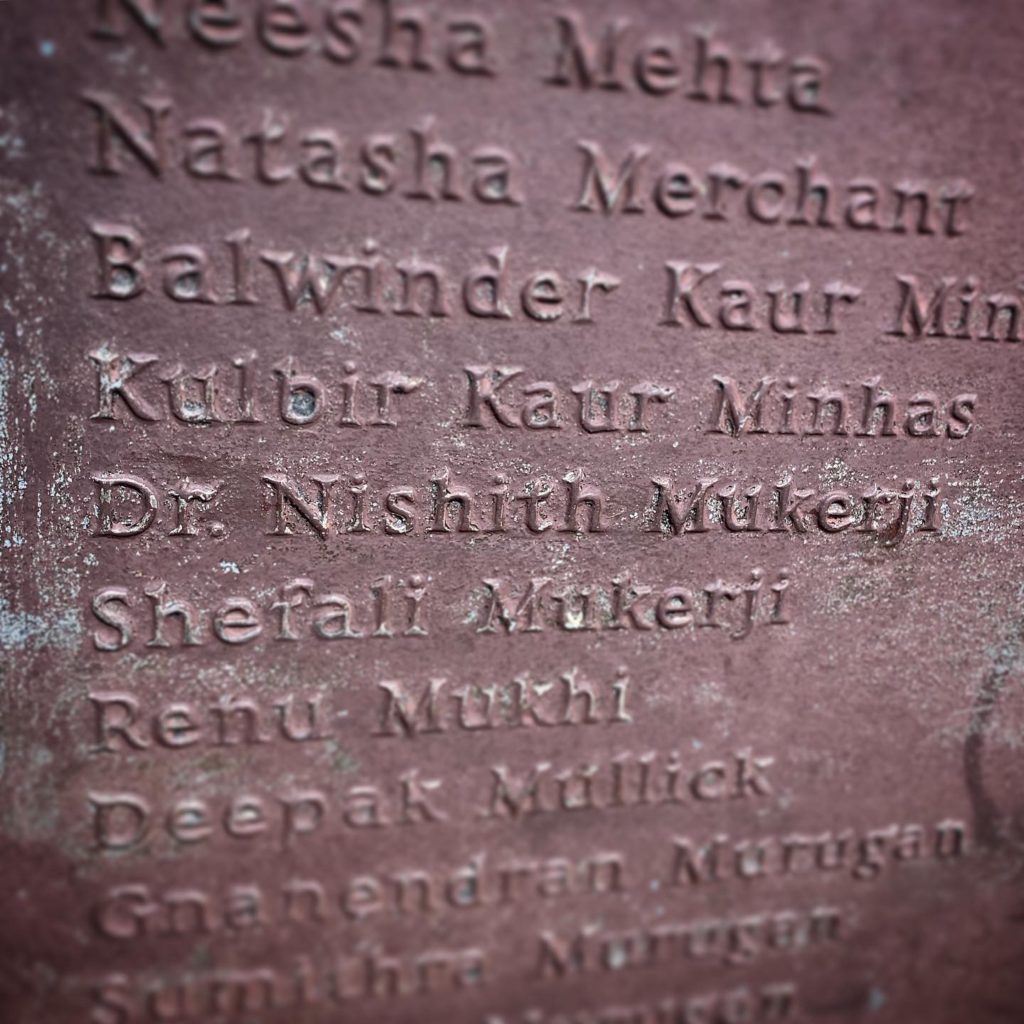 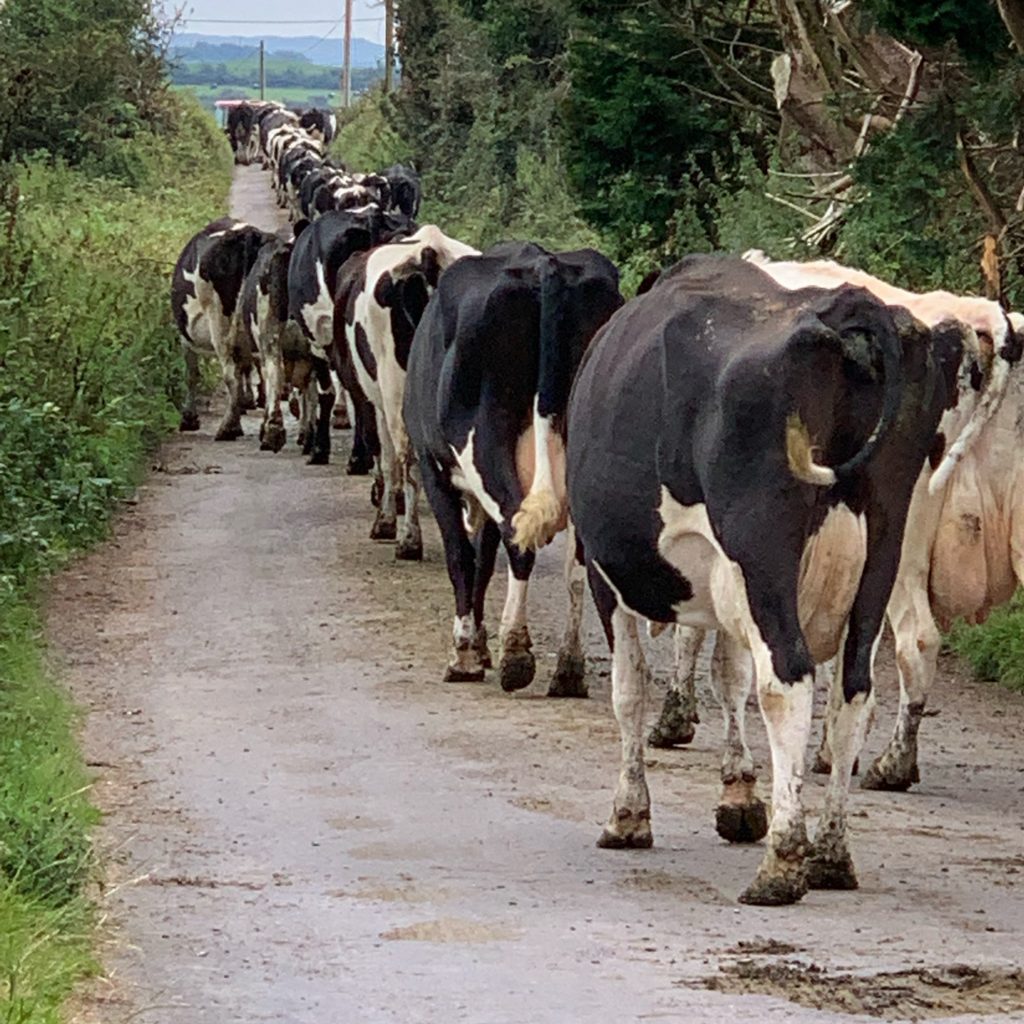 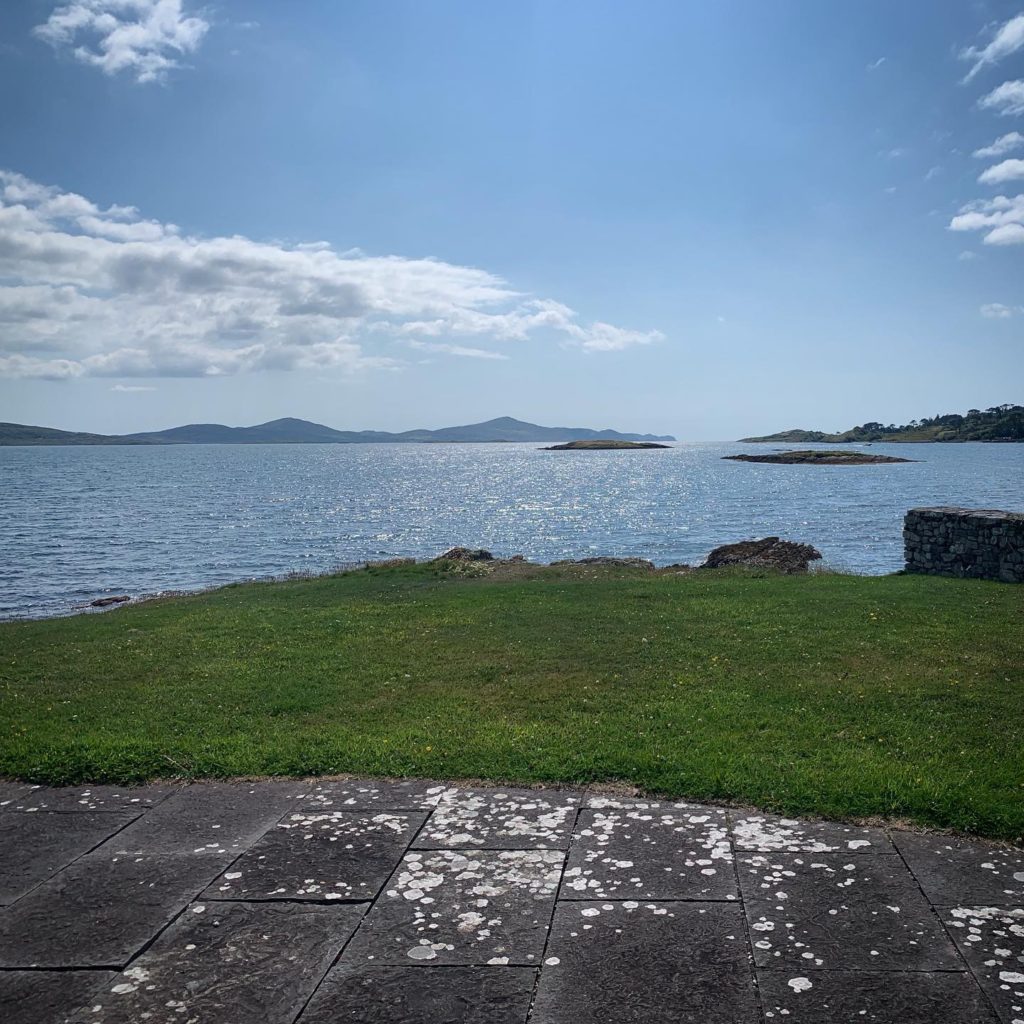 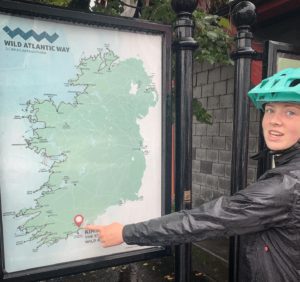 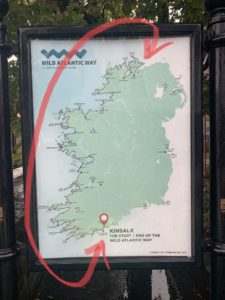 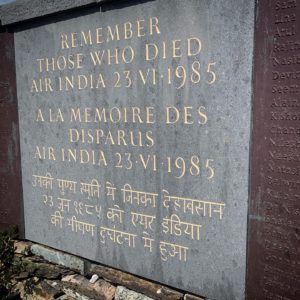 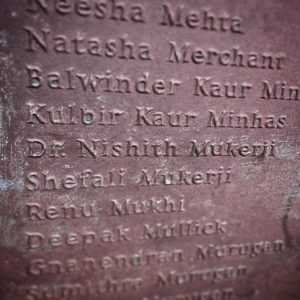 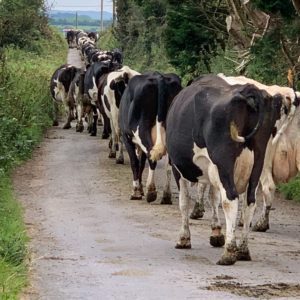 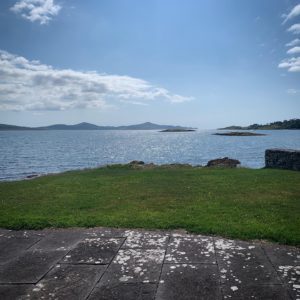 We arrived into Kinsale and the end of our wild Atlantic journey on a fittingly wet and windy afternoon. We have a simple celebration gathered around a sign marking the finish line but are frankly more keen to get out of the rain and into a pub for some hot soup and tea. Throughout our journey we weren’t obsessed with following the exact WAW route from Derry to Kinsale and we didn’t keep track of the exact distance we travelled. That wasn’t the point for us. We started riding our bikes from the northern most tip of Ireland and hugged its west coast until we reached the southern most tip. We did the lion’s share of the 2500 kilometres that this entails and wandered where instinct took us. Cycling Ireland’s Wild Atlantic Way with your kids is definitely not for the faint of heart but for those who have the appetite to weather the wind and rain, to deal with narrow, rough roads, to face the grumblings of worn-out youngsters (and oldsters) and to embrace the unexpected at every turn, journeying on Ireland’s Wild Atlantic Way is guaranteed to be a trip of a life time! 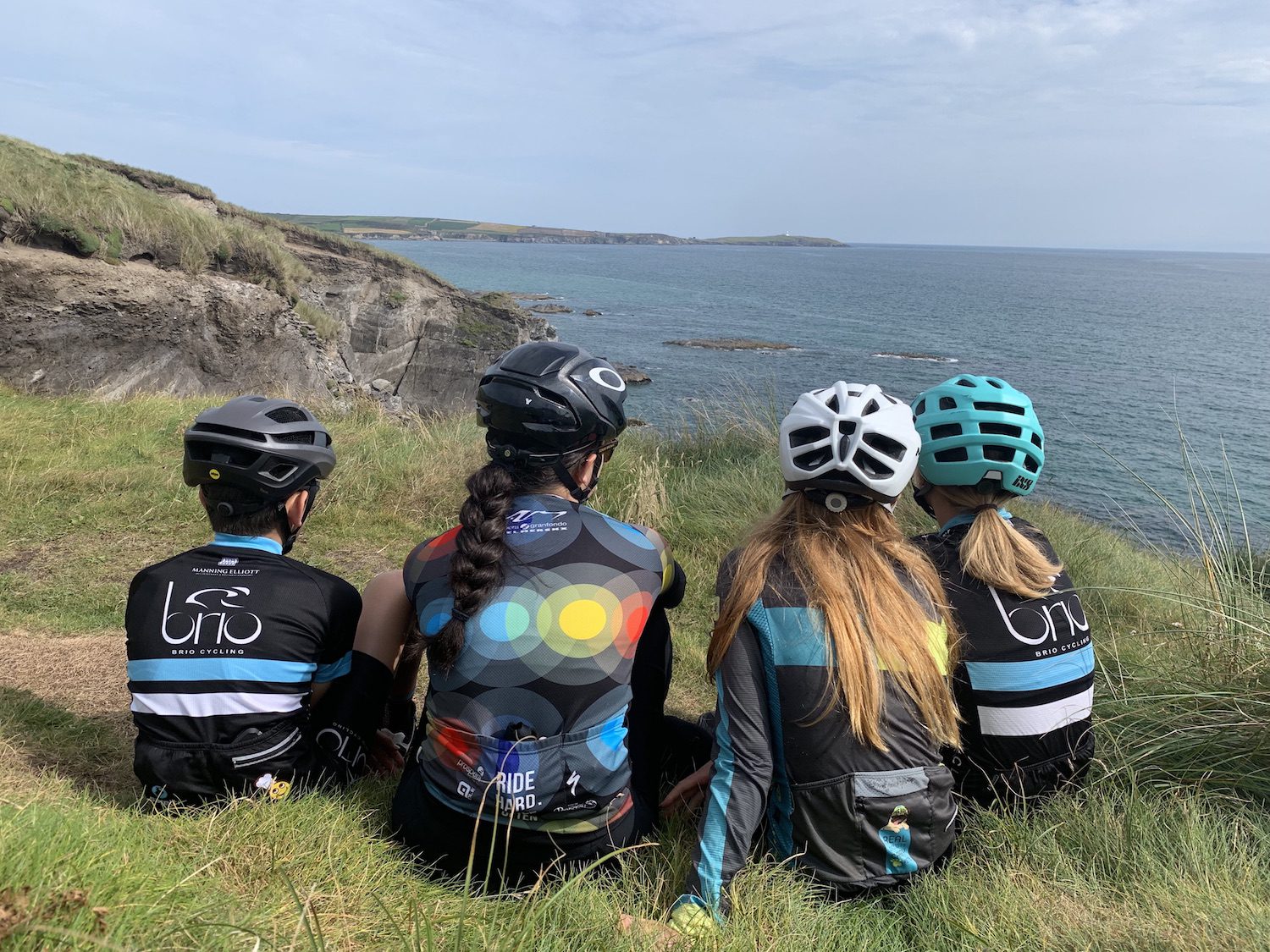 Part 7: An Antarctic meeting in Ireland
Part 8: A musical interlude at The Gap of Dunloe